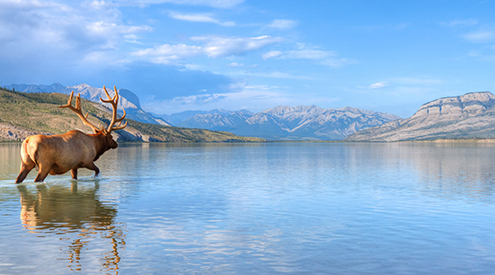 WASHINGTON - The U.S. Senate is poised to vote as early as tomorrow on eliminating Clean Water Act protections that prevent aquatic invasive species from entering U.S. waters through the discharge of ballast water. Tucked into the Coast Guard authorization bill is the Vessel Incidental Discharge Act—a bill that exempts the shipping industry from complying with the Clean Water Act. The bill puts in place weaker, ineffective standards that will leave U.S. waters vulnerable to future aquatic invasive species that currently cost U.S. businesses, utilities, communities, and municipalities millions of dollars per year in damages and control costs.

Conservation groups are asking U.S. senators to oppose the Coast Guard bill unless the Vessel Incidental Discharge Act is removed.

Conservation groups oppose the Vessel Incidental Discharge Act because it:

The Clean Water Act is the No. 1 tool for protecting U.S. waters from pollution—including biological pollution. Invasive species are a national problem, requiring a strong national response. Lax protections would be disastrous because once invasive species take hold, they are impossible to eradicate. In fact, they will likely spread. Invasive zebra and quagga mussels, which were introduced into the Great Lakes via ballast water in the late 1980s, have now spread to California, Nevada, and Texas.

“The Clean Water Act has proven to be the most effective tool we have to prevent pollution into our rivers, lakes, and oceans. Exempting the shipping industry from their obligations under the Clean Water Act not only leaves the door open to future invasive species—it foists the staggering costs of invasive species onto people, communities, and businesses. Every U.S. senator who cares about our drinking water, fishing, and outdoor recreational economy needs to oppose this assault on clean water and pass a clean Coast Guard bill that does not have these damaging provisions.”

“This bill would gut both the protections of the Clean Water Act and the law’s bedrock principle of cooperative federalism for the sake of a special interest and its lobbyists. State and local governments, and taxpaying families and businesses, will have to shoulder heavy costs from the inevitable damage this bill will cause.”

“This bill will cost taxpayers and the environment dearly as it is nothing more than a welcome mat to invasive species from international ports that will continue to destroy commercial and recreational fishing industries, clog the nation’s infrastructure, and ruin habitat in our nation’s waters.”

“Invasive species have fundamentally altered some of the nation’s most important and sensitive waters. By and large they have arrived as living pollution in ballast water. And living things don’t just sit around, which is why after transforming the Great Lakes, we are now seeing many of those same invasives infiltrating inland waterways too. This is the wrong time to make it easier for new species to arrive. But that is exactly what this bill will do by making the nation less vigilant and industry less aggressive in the fight to stop invasive species.”

“The Clean Water Act has provided protection for our waters from polluted ship discharges for almost a decade. Congress shouldn't allow this dirty industry to start dumping its pollution in our oceans and lakes again.”

“Non-native aquatic species have already ravaged San Francisco Bay, the Great Lakes and other rivers and estuaries. This legislation will make the problem exponentially worse. This is a gift to industry and an insult to taxpayers, who already help support billions of dollars in restoration efforts just to keep current invasions from ballast water from getting worse.”

“Weakening Clean Water Act protections will undermine efforts to restore and protect the Great Lakes and will harm our environment and economy. The Great Lakes demand the toughest protections afforded under the Clean Water Act, not weak, ineffective standards under the Vessel Incidental Discharge Act. U.S. senators must stand firm in opposition to misguided policies that threaten our drinking water, jobs, and way of life.”