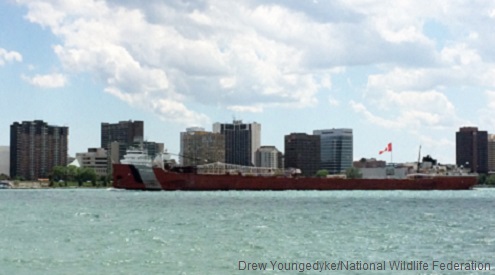 ANN ARBOR, MI — Today, the U.S. Senate defeated S.1129, the Coast Guard Authorization Act of 2017, based on its inclusion of a provision – the Vessel Incidental Discharge Act (VIDA) - which would have weakened Clean Water Act protections against aquatic invasive species entering the Great Lakes though the ballast water of ships.  The Senate defeated a motion to limit debate on the bill 56-42, needing 60 votes to proceed.

“This is a victory for clean water, the Great Lakes and the communities which rely on them,” said Marc Smith, director of conservation partnerships for the National Wildlife Federation’s Great Lakes Regional Center. “We thank senators from the Great Lakes and around the country who voted today to protect our waters from costly aquatic invasive species which can wreak havoc on the local economies and fisheries of the Great Lakes and across the nation.”

Ships use ballast water to provide stability and balance in transit. When they draw in water, invasive species can be drawn into holding tanks, and when they discharge the water (for instance, when picking up cargo), those invasive species are also discharged into the new water – like the Great Lakes. Species like quagga and zebra mussels have already disrupted the Great Lakes environment, impacting tourism, outdoor recreation and clogging up municipal water intake pipes, costing hundreds of millions of dollars each year.

VIDA would have stripped ballast water discharges from Environmental Protection Agency oversight under the Clean Water Act, instead transferring that authority to the Coast Guard and preventing states from adopting stronger protections.

“The Clean Water Act is the most effective mechanism for protecting our waters,” said Smith. “Transferring that authority to the Coast Guard would have effectively ended the possibility of adopting more effective protections, instead cementing in place existing inadequate standards.”

Founded in 1936, the National Wildlife Federation represents more than 6 million members and supporters and 51 state and territorial affiliates. Its mission is to unite all Americans to help wildlife thrive in a changing world.