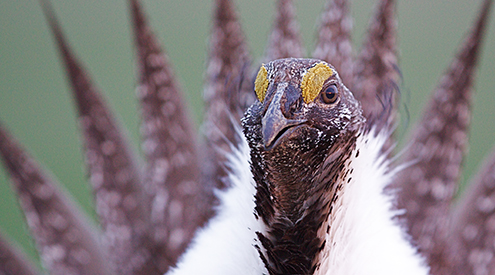 Great Falls, MT. – Conservationists filed suit today in U.S. District Court in Montana against the Bureau of Land Management and Interior Secretary Ryan Zinke to demand that the administration uphold the deal made to save the greater sage-grouse and its habitat in 10 Western states. Under this administration, leasing and proposed leasing in sage-grouse habitat has increased, threatening the conservation of the species.

The lawsuit was filed by Earthjustice on behalf of the Montana Wildlife Federation, the Wilderness Society, National Audubon Society, and National Wildlife Federation. The organizations say the federal government has violated two laws, the Federal Land Policy and Management Act and the National Environmental Policy Act, by disregarding the 2015 greater sage-grouse conservation plans and offering oil and gas leases on important sage-grouse habitat on public lands in Montana, Nevada and Wyoming in conflict with the safeguards detailed in the plans. In December alone, nearly 90 percent of the more than 200 parcels offered for oil and gas leases in Montana and 93 percent of the 45 parcels in Wyoming were in sage-grouse habitat.

In addition to the leases challenged in this sale, more oil and gas leasing is proposed in sage-grouse habitat across the West. Based on a preliminary list, virtually all of a 700,000 acre lease sale scheduled for December in Wyoming is in sage grouse habitat.

The protection of sage-grouse habitat is the result of one of the largest conservation efforts in U.S. history, which made a listing under the Endangered Species Act unnecessary for the greater sage-grouse by setting aside important habitat on public lands to enable the species to survive.

The planning effort, which took more than four years, involved intensive efforts by the U.S. Forest Service, Western governors, sportsmen, public lands users, and representatives of the oil and gas and ranching industries. Since taking office in 2017, however, the Trump administration has ignored those protections while offering hundreds of new leases in important sage-grouse habitat.

“The sage-grouse plans were hard-won agreements developed over years of work by Montanans and other Westerners. The plans preserve habitat for the sage-grouse while protecting public access to public land, and maintaining oil and gas development, ranching and other land uses,” said Dave Chadwick, executive director of the Montana Wildlife Federation. “Maybe some people in the Interior Department now disagree with those plans, but that doesn't mean they can just ignore them. We are asking the court to make the federal government honor their deal. Otherwise, we risk losing the sage-grouse, the herds of mule deer and pronghorn and the hundreds of other animals that rely on sagebrush lands.”

“The binding commitments in the sage-grouse plans to prioritize leasing and drilling outside of habitat are needed to ensure conservation of the greater sage-grouse will succeed. Flouting these requirements endangers sage-grouse and calls into question the credibility of those who are supposed to be managing our public lands for all Americans while seeming to focus only on giving more lands to the oil and gas industry,” said Nada Culver, The Wilderness Society’s senior counsel and director of the BLM Action Center.

“Through these lease sales, the Interior Department is pulling a fast one on Westerners and putting an entire landscape and way of life at risk while they’re at it,” said Brian Rutledge, director of the National Audubon Society’s Sagebrush Ecosystem Initiative. “The 2015 sage-grouse conservation plans took years of careful compromise and collaboration and violating those terms sows uncertainty across 10 states. The courts now provide a backstop to ensure the government keeps its word to Western stakeholders. Out here we know a deal’s a deal.”

“Less than three years ago, the Interior Department committed to protect the sage-grouse,” said Earthjustice attorney Michael Freeman. “We’re going to court in order to hold the government to the promises it made to the public.”

Sage-grouse populations, which once numbered in the millions, have been decimated by oil and gas development and other disturbances. The 2015 BLM protections are central to preserving the species, because 45 percent of the grouse’s current habitat lies on lands managed by the BLM.

The Interior Department’s own research identifies the impacts of oil and gas development as “universally negative and typically severe,” and among the “primary threats” to the survival of the species, which has declined to an estimated 10 percent or less of its historic population levels.