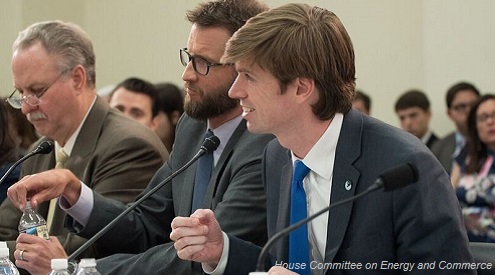 WASHINGTON, D.C. — National Wildlife Federation President and CEO Collin O’Mara testified today before the U.S. House Energy and Commerce Environment Subcommittee on the need for the U.S. Congress to reform the Renewable Fuel Standard to promote advanced fuels that are cleaner and more sustainable than so-called first-generation biofuels from corn and soy beans that have been disastrous for wildlife habitat, drinking water, and climate.

“The Renewable Fuel Standard has decimated millions of acres of wildlife habitat, while stunting the development of more-sustainable, cleaner biofuels,” said O’Mara. “Now is the time to put this policy back on track. A top priority needs to be solidifying support for advanced, cleaner, and more sustainable fuels that benefit our environment and economy—fuels that put a stop to the alarming damage we’re seeing to our wildlife habitat, water, and climate. The good news is that solutions exist. Now it’s time for Congress to adopt them by supporting common-sense reforms found in the GREENER Fuels Act.”

To accelerate the transition to cleaner, more sustainable biofuels, the National Wildlife Federation is urging Congress to reform the Renewable Fuel Standard by prioritizing advanced biofuels over conventional corn- and soy-based fuels, as well as securing a long-term, binding commitment to cleaner advanced biofuels that provides businesses and financiers with the security they need to make long-term investments in research and development, facilities upgrades, and business infrastructure.

Advanced biofuels that could be derived from native grasses, corn stalks, leaves, and cobs (as opposed to edible kernels), forest trimmings, and other sustainable products hold the potential to provide cleaner transportation fuel, while reversing the alarming damage caused by current biofuels.

“The science continues to show that sustainably harvesting native grasses and other plants for biofuels, along with utilizing waste products and residues, can be done so as to protect water quality and quantity, provide habitat for numerous wildlife species such as pollinators and birds, and sequester carbon in the soil,” according to O’Mara in his written testimony. “All of these things can be done in concert with other land uses such as livestock grazing, offering farmers, ranchers, and other landowners valuable new revenue streams. A diverse array of biofuel production methods dispersed all around the country, with local options appropriate for each state, region, or soil and climate type: that is the vision [of the Renewable Fuel Standard] we supported.”

But these newer fuels are an afterthought in the nation’s current biofuels policy. Even though the Renewable Fuel Standard calls for seven billion gallons of advanced biofuels this year, the EPA is requiring a mere four percent of that amount, or 288 million gallons. The rest of the “advanced” category is being filled with soy-based biodiesel, a fuel with nearly the same land, water, and biodiversity challenges as corn ethanol.

The production of corn- and soy-based biofuels has led to the destruction of millions of acres of wildlife habitat, sent additional pollution into our waters that feeds massive algal blooms and dead zones, and contributed to climate change.