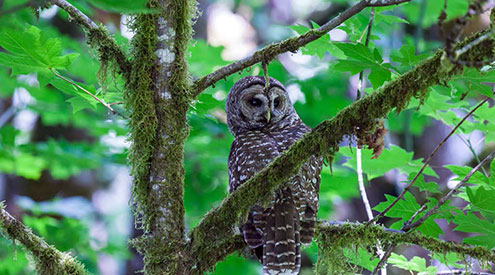 Reston, VA – The National Wildlife Federation is honoring the nation’s most wildlife-friendly cities as part of its 81st annual National Wildlife Week and Portland, OR earned the number three spot on the list.

The National Wildlife Federation’s Urban Wildlife Program ranked America’s 100 largest cities based on several important criteria for wildlife, including the amount of parkland within the city, participation in urban wildlife programs and citizen action measured by citizen participation in the National Wildlife Federation’s Certified Wildlife Habitat™ program. Certified Wildlife Habitats are properties that provide all the necessary elements for wildlife to survive – food, water, cover and places for wildlife to raise their young, while integrating sustainable gardening practices.

“Our green spaces, backyard gardens and vast number of beautiful city parks are core to our values as Portlanders, explained Portland Mayor, Ted Wheeler. “Portland would not be the thriving, dynamic and beautiful city it is without our wildlife. This is in large part thanks to residents creating wildlife habitat in their communities, and the city of Portland’s intentional actions to protect and preserve wildlife. As our city grows, it’s our responsibility to intentionally ensure wildlife and natural areas are protected.”

The city of Portland currently has 657 Certified Wildlife Habitats, 51 of which are Schoolyard Habitats. Sustainability plans such as the Climate Action Plan and the 2035 Comprehensive Plan aim to increase backyard gardens, biodiversity, and green infrastructure within the city. The Portland Area Watershed Monitoring and Assessment Program (PAWMAP), run by the city or Portland, plays a big role by measuring changes in habitat, water quality and biological communities.

“Portland is proud to be a city where nature is celebrated and enjoyed,” explained Commissioner Fish. “Portlanders value the trees, green spaces, and wildlife that make our city healthier and a great place to live,” says Portland City Commissioner Nick Fish, who oversees  Portland Parks & Recreation and the Bureau of Environmental Services. “Both my bureaus are working to bring salmon and other wildlife back to our city. Today, salmon are found in 125 of Portland’s 300 miles of streams and rivers and Parks oversees 11,000 acres of parks and natural areas, including one of the largest urban wilderness areas in the country.”

“The Association of Northwest Steelheaders, as the Oregon affiliate of National Wildlife Federation (NWF), is pleased to see that Portland is ranked 3rd for NWF's Top 10 Cities for Wildlife,” explained Tom Vanderplaat, Board President, Association of Northwest Steelheaders.  “Portlanders and Oregonians have a long history of valuing the benefits of fish, wildlife, and natural areas to enjoy and cherish.”

Vanderplaat continued, “Many families, including my adult children and grandchildren, regularly explore those natural areas such as Forest Park and other open spaces. They provide a home and habitat for our wild creatures, both small and large, to live and flourish. Communities that plan, maintain, and restore natural areas for fish and wildlife see multiple benefits to their residents through improved livability, healthier lifestyles, and increased opportunities to see and interact with nature around them. A great example of people connecting with nature is NWF’s Garden for Wildlife program. The Steelheaders have teamed up with NWF to ensure salmon and trout have healthy water quality downstream. There is true joy in knowing that we can live in concert with wildlife - it demonstrates to future generations the importance of creating fish and wildlife habitats, as their continued existence is tied to our bright future.”