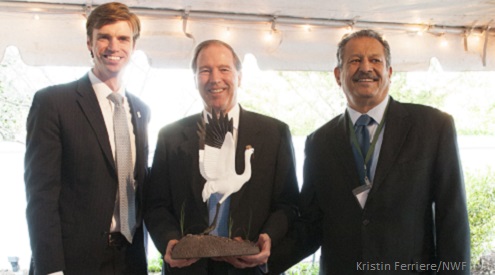 “Every New Mexican has benefited from Udall’s leadership on conservation and wildlife issues,” said Jesse Deubel, executive director of the New Mexico Wildlife Federation. “We appreciate all he has done for the state.”

“Tom Udall’s conservation legacy is among the greatest in our nation’s history,” said Collin O’Mara, president and CEO of the National Wildlife Federation. “From the moment he arrived in Congress 20 years ago, our friend Tom has been an unwavering champion of our wildlife heritage, outdoor recreation, public lands, clean water, and ensuring our natural resources endure for future generations. Through relentless pragmatism and bipartisanship, he led the historic reforms of the Toxic Substances Control Act, secured permanent conservation protections for hundreds of thousands of acres including Rio Grande del Norte, Organ Mountains-Desert Peaks, Valle Vidal, and Sabinoso Wilderness, and, most recently, helped permanently reauthorize the Land and Water Conservation Fund. During his final two years in office, we look forward to building upon Senator Udall’s stellar record of accomplishments to protect our air, water, wilderness and wildlife for future generations.”