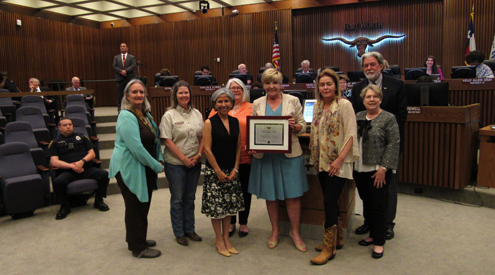 Washington, DC – The City of Fort Worth, Texas, is being honored as a Monarch Butterfly Champion City by the National Wildlife Federation’s Mayors’ Monarch Pledge program, becoming the fourth city in North America to be recognized with this title for its remarkable commitment to monarch conservation. In the past year, Fort Worth has created 97 acres of monarch habitat, and it has reached over 100,000 residents through the Mayors' Monarch Pledge.

This achievement is the product of years of hard work and commitment, beginning in 2015, when Fort Worth first joined the program. Since then hundreds of cities across the country have signed the Mayors’ Monarch Pledge, with 460 signers as of today. Ever since, Mayor Betsy Price, the Park and Recreation Department, and the city’s monarch conservation network — Fort Worth Pollinator Ambassadors — have been instrumental in achieving this honor and promoting the conservation of monarch butterflies and other pollinators within the community. The Park and Recreation Department was also responsible for accomplishing the initial three action steps, and to this day they continue to support organizations around the city in their efforts to create monarch friendly habitats.

“Fort Worth lies in the middle of the Central Monarch Flyway, the critical migratory pathway for the monarch butterfly. Despite its mostly urban environment, Fort Worth is currently providing habitat for monarchs at city parks, schools, backyards, and throughout the city to ensure monarch butterflies have enough native habitat to survive,” said Collin O’Mara, president and CEO of the National Wildlife Federation. “We applaud and thank Mayor Price for taking the National Wildlife Federation’s Mayors’ Monarch Pledge as a ‘Champion City’ today, and increasing the actions the city will take to help monarch butterflies. Fort Worth is now the fourth city to make a champion level pledge in North America and we are thrilled to partner with them and work together to create more habitat for monarchs, pollinators, and wildlife across the country.”

“In Fort Worth, we appreciate the beauty that comes with monarchs migrating through our community. As a city that encourages an active and engaged lifestyle for all citizens, we recognize the important role conservation, education and nature plays in overall quality of life. Fort Worth is fortunate to have a community that embraces monarchs and works to preserve our wildlife,” said Mayor Betsy Price of the City of Fort Worth.