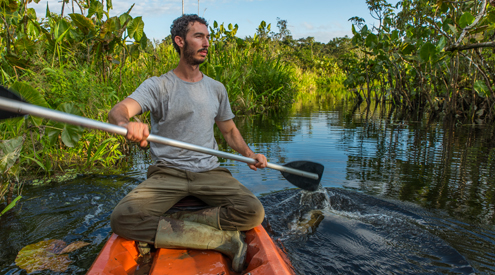 Washington, DC— National Wildlife Federation and Ranger Rick magazine announced Javier Aznar Gonzales de Rueda as the winner of the 2018 Ranger Rick Photographer of the Year Award. Each year this award is given to the professional photographer whose work in Ranger Rick has most effectively advanced the magazine’s mission: to inspire in young children a love and understanding of wildlife and the natural world.

Aznar’s passion for wildlife and the outdoors began when he was a child living in Spain. On the weekends he would visit the countryside with his family, where he fell in love with nature. These experiences drove him to study biology, and at the early age of 12, Aznar started photographing insects with a small digital camera. After finishing his degree in biology and working in the service industry for a year and a half, he was able to save enough money to buy professional photography equipment and travel to Ecuador. For the next three years, Aznar devoted himself to observing and photographing some of the rarest and most elusive animals in the rainforest. There, he found himself in awe of Ecuador’s tiny treehoppers, and endeavored to make a photographic story about the insects, highlighting their distinctive helmets, horns, and knobs as well as their ability to release a sweet liquid called honeydew. The honeydew is good food for ants, bees, and wasps.

“The passion that Aznar has for wildlife is clearly reflected in his work,” said Susan McElhinney, Ranger Rick’s photo editor. “The stories he tells with his photographs, take young readers on extraordinary adventures through the rainforest and other wild places. They also teach children a lot about animal behavior and biodiversity.”

Aznar is an Emerging League Photographer at the International League of Conservation Photographers and has contributed to projects such as Meet Your Neighbours and websites such as Moroccoherps. He lives in Spain, but travels around the world in search of unusual animals to photograph.

Ranger Rick Photographer of the Year aims to encourage excellence in photography and to advance visual literacy in the field of natural history. It’s through photo stories like Aznar’s that Ranger Rick readers are able to immerse themselves in the natural world and develop a passion for wildlife that, for many, carries on throughout their lifetimes.

Along with the distinction of winning the award, Aznar receives a $1,000 prize and an announcement in the June/July 2019 issue of Ranger Rick. Be on the lookout, as he will also be featured in the August/September issue of National Wildlife Magazine as a Nature’s witness. To see his treehopper story, click here.