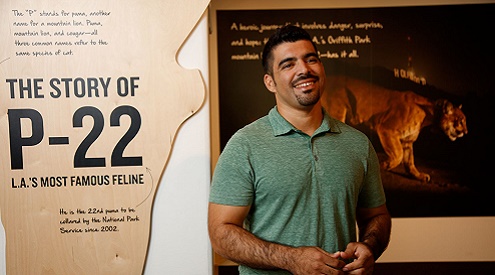 LOS ANGELES — Wildlife biologist and conservation champion Miguel Ordeñana has joined the National Wildlife Federation’s Board of Directors as an at-large member. Ordeñana is a community science manager and wildlife biologist at the Natural History Museum of Los Angeles County and has been a great partner in the National Wildlife Federation’s urban wildlife conservation efforts. In addition to his scientific work, Ordeñana is dedicated to sharing his learnings to connect with, inspire, and engage students from diverse communities throughout Los Angeles.

“We’re excited that the National Wildlife Federation is recognizing Miguel’s ongoing dedication to urban wildlife conservation by unanimously voting him to join the 83 year-old organization’s board,” said Beth Pratt, California regional executive director at the National Wildlife Federation. “He has been instrumental to the success of our #SaveLACougars campaign since its inception, and he has used his personal connection to the famous mountain lion P-22 to inspire many people around the world. His work as a change-maker in empowering diverse communities in conservation work will enable the Federation to significantly advance our commitment to connect all people to wildlife, and celebrate and empower diverse perspectives about the natural world.”

“I am honored to have been elected to join the Board At Large of the National Wildlife Federation and be in the company of such accomplished conservation leaders,” Ordeñana said. “The National Wildlife Federation not only has a rich history of conserving iconic species within our cherished protected open spaces, but is beginning to place a genuine and much needed emphasis on urban wildlife conservation and empowering diverse human populations that share habitat with wildlife in urban areas, which nicely aligns with my strengths and passions. I will draw from my unique professional background as a community science manager at the Natural History Museum of Los Angeles County as well as from my personal experiences as a minority in the sciences. I look forward to assisting National Wildlife Federation leadership to expand its commitment to preserving wildlife and creating an easier path for a more diverse next generation of wildlife advocates."

In 2012, as part of a collaborative wildlife study, Miguel was sorting through thousands of images when he discovered the first known photograph of P-22, the now famous mountain lion who crossed multiple freeways to make his home in Los Angeles’ Griffith Park. “It was like finding an image of Bigfoot or the chupacabra,” he said. “I knew it was going to be a game-changer for urban wildlife.”

Ordeñana is one of the founding advisory members for the #SaveLACougars campaign, served on the committee for P-22 Day & Urban Wildlife Week, and has done the 50-mile hike ‘Following in the Footsteps’ of P-22 led by Beth Pratt. He is also featured in Pratt’s book, “When Mountain Lions are Neighbors,” and in the film “The Cat That Changed America.” He serves on the board of Friends of Griffith Park, a key partner in National Wildlife Federation’s work in Los Angeles and was even awarded an Association of Science-Technology Centers Diversity and Leadership Fellowship.

Ordeñana joined the Natural History Museum of Los Angeles County in 2013. Prior to working at the museum, he was as a wildlife biologist for federal and state agencies throughout California. As a biologist, he studies urban wildlife species in Los Angeles and is a liaison between researchers and the general public. Ordeñana’s current role with the museum involves promoting and creating community science projects, recruiting community scientists, and community science training. He also uses bat detectors to study urban bat species of Los Angeles and oversees camera traps to study urban carnivores living in Griffith Park, where he grew up.