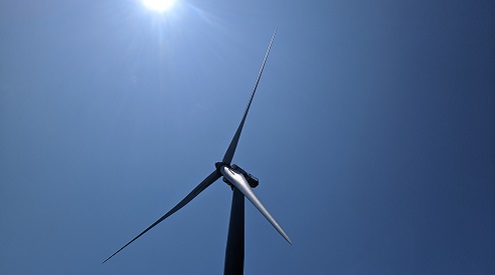 A Historic Day for Climate and Energy in New York

NEW YORK, NY – Committing to clean energy development will support new jobs, a strong economy, and better protections for wildlife and the landscapes they call home. This is the message New York is sending with today’s signing of the Climate Leadership and Community Protection Act on the same day that Governor Andrew Cuomo announced New York’s selection of two offshore wind power projects, through companies Ørsted and Equinor, totaling 1,700 megawatts – enough to power over one million Empire State homes.

“Governor Cuomo and New York’s leaders are serious about rising to the challenge of the climate crisis with the country’s most ambitious climate plan, offshore wind mandate and project announcements,” said Collin O'Mara, president and CEO of the National Wildlife Federation. “Specifically, Governor Cuomo announced the largest award of offshore wind projects in the nation, demonstrating that New York can begin achieving these goals right now with responsibly developed offshore wind power that protects wildlife, creates jobs, and protects vulnerable communities from the threats of climate change. The National Wildlife Federation is proud of the remarkable leadership of community leaders, like Environmental Advocates of New York and NY Renews, and looks forward to working together in partnership to take additional steps to protect frontline communities and ensure no workers are left behind by the transition to a clean energy economy.”

“Today, New York begins its official breakup with fossil fuels. Under the Climate Leadership and Community Protection Act, New York will both slash climate pollution and provide a playbook for the rest of the nation to follow,” said Peter M. Iwanowicz, executive director of Environmental Advocates of New York. “New York’s action is more than ambitious, it is essential, especially if we are going to have a chance to be free from the global climate crisis. And how fitting that the Empire State is once again leading the way. Governor Andrew Cuomo, Senate Majority Leader Andrea Stewart-Cousins, Assembly Speaker Carl Heastie, and the CLCPA sponsors Assemblymember Steve Englebright and Senator Todd Kaminsky, deserve our thanks for their leadership and vision in moving New York ahead to a healthier future.”

Reducing carbon emissions in order to combat greater effects of a rapidly changing climate is vital to ensure the health and prosperity of our lands, people, wildlife and economy. Responsibly developed offshore wind power is a great example of a resource that can help move us toward that goal. The recent commitments from New York lawmakers is a clear affirmation of the urgent need to harness America’s largest untapped clean energy source to confront climate change, create jobs and other economic benefits, and protect wildlife and their habitats. Today’s strides should serve as guidance so that other states may follow suit and make big changes to how we power our planet.