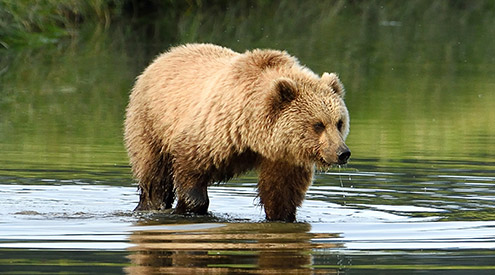 WASHINGTON, D.C. — Today the Trump administration announced it would allow logging on more than half of North America’s largest intact rainforest. By reversing the National Roadless Rule for the Tongass National Forest, the administration is dismantling two decades of protections for the old growth forest and the diverse wildlife populations which live there.

“The towering old-growth trees of the Tongass National Forest are a global treasure,” said Collin O’Mara, president and CEO of the National Wildlife Federation. “Paving the way for clear cutting across 9 million acres is an ecological abomination. Rather than proposing any semblance of balance, this latest extreme action by the Trump administration will irreparably harm local watersheds, fish and wildlife populations, and the region’s robust outdoor recreation economy.”

“Nothing about the effort to exempt over 9 million acres of Tongass National Forest from the National Roadless Rule makes sense for the future of Southeast Alaska,” said Meredith Trainor, executive director of the Southeast Alaska Conservation Council.  “The proposal to exempt the Tongass threatens fish habitat and the fisheries they support; undermines tourism by damaging the landscapes our visitors come to see; destroys deep, wild, forested habitat relied upon by species other than our own; and lifts up the crown jewel of the National Forest system, the big old growth trees of the Tongass National Forest, and asserts that they are worth only as much as the lowest bidder is willing to pay.”

The Tongass National Forest is the largest forest in the United States and one of the largest intact temperate rainforests in the world.  It is home to a diverse array of wildlife including wolves, Sitka black-tailed deer, brown bears and bald eagles. Every year more than a million visitors come to the Tongass to enjoy the old growth forest and to hunt, fish, hike and camp there.   The forest helps support a robust economy of tourism, commercial and sport fishing and many other small businesses. In 2017, the outdoor recreation economy in Alaska generated $7 billion in consumer spending and supported 72,000 jobs.

The National Roadless Rule was signed into law in 2001 and has helped protect 58 million acres of inventoried roadless areas on national forest lands while giving flexibility for activities such as recreation, hydropower, mining access and wildfire response.