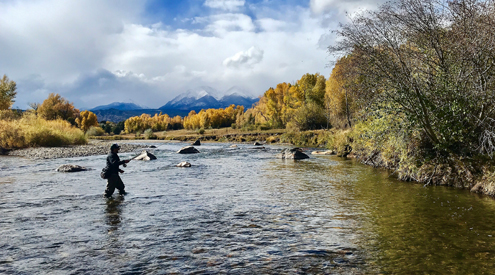 WASHINGTON, D.C. — The National Wildlife Federation and Congressional Sportsmen’s Foundation, two of the nation’s leading conservation and outdoor advocates, urged members of the U.S. House of Representatives to stand up for America’s hunters and anglers by supporting the Great American Outdoors Act. The bill, which is the most important conservation legislation in decades and slated for a vote next week, would expand access for hunters and anglers, invest in critical wildlife habitat and public lands, and strengthen the nation’s outdoor heritage for generations to come.

The Great American Outdoors Act passed the U.S. Senate earlier this summer on a 73-25 vote.

“As we confront the COVID-19 pandemic, tens of millions of Americans are depending upon our public lands for outdoor recreation, exercise, and solace. Every member of Congress should demonstrate their commitment to revitalizing these vital lands and ensuring that all Americans — including millions of hunters and anglers — can access nature by supporting final passage of the bipartisan Great American Outdoors Act,” said Collin O’Mara, president and CEO of the National Wildlife Federation. “This once-in-a-generation conservation legislation will create hundreds of thousands of desperately needed good jobs, while ensuring that all Americans can enjoy our nation’s natural treasures for generations. The National Wildlife Federation is proud to partner with the Congressional Sportsmen’s Foundation and hundreds of other conservation organizations that have worked together to strengthen the Great American Outdoors Act and ensure it is signed into law.”

“The Great American Outdoors Act is the single greatest conservation and access legislation to receive a final vote in a lifetime,” said Jeff Crane, president of the Congressional Sportsmen’s Foundation. “The value of America’s public lands for hunting, fishing, recreational shooting, especially as Americans seek refuge in the outdoors during these challenging times, cannot be understated. It is now more important than ever for House members to be present on the floor and to vote to send this bill to the President’s desk.”

The National Wildlife Federation and Congressional Sportsmen’s Foundation were instrumental in working with Republican and Democratic lawmakers to ensure that the bill included funding for all public lands, including wildlife refuges, national forests, and Bureau of Land Management lands.

The Great American Outdoors Act’s inclusion of funding to address the maintenance backlog on these lands is critical for America’s hunters and anglers. Of 439 million acres managed by the U.S. Forest Service and Bureau of Land Management, 99 percent are open to hunting and fishing. In addition, the funding provided in the Great American Outdoors Act will help support and facilitate the nearly 25 million hunting days and 45 million fishing days provided by the Bureau of Land Management, National Wildlife Refuge System, and the U.S. Forest Service.