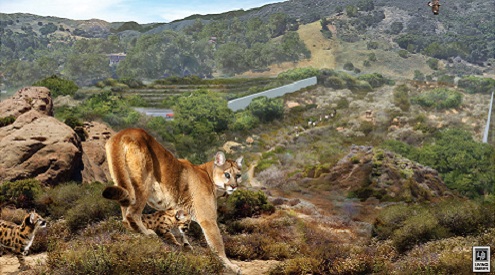 Wildlife Crossing at Liberty Canyon will be Largest of its Kind, Will Serve as Global Model for Urban Wildlife Conservation

LOS ANGELES — The National Wildlife Federation’s #SaveLACougars campaign today released a series of new images that show how the design of the wildlife crossing is advancing as the anticipated break ground date of 2021 approaches.

The project responds to two decades of National Park Service research, and the need to create a vital connection for the endangered mountain lion population and other wildlife that make their home in the Santa Monica Mountains. In addition to saving the mountain lions from possible extinction, the crossing will also reconnect a long-fragmented ecosystem for all wildlife in an area recognized as one of only thirty-six biodiversity hotspots worldwide.

The wildlife crossing is a public-private partnership of monumental scope that has leveraged the expertise and leadership of dozens of organizations and institutions from the public and private sector. The core partners include Caltrans, the National Park Service, the Santa Monica Mountains Conservancy, Resource Conservation District of the Santa Monica Mountains, and the National Wildlife Federation.

The project partners also recently added a world-renowned design team led by landscape architectural practice, Living Habitats LLC to advance the project. Over the past year, the Living Habitats team has collaborated with Caltrans and coordinated with a broad team of experts in the planning and design development of the wildlife crossing that will span over ten lanes of the U.S. 101 Freeway in Agoura Hills.

“This crossing will save the local mountain lion population from extinction, stand as a global model for urban wildlife conservation — and show us that it’s possible for a structure of this magnitude to be built in a such a densely populated urban area,” said Beth Pratt, California Executive Director for the National Wildlife Federation and leader of the #SaveLACougars campaign. “For years, our project partners have all brought incredible expertise to this effort. With the addition of Living Habitats and the world-renowned experts they bring, recognized as the top in their field, we are in a position to not only build the largest crossing in the world, but also the very best. We owe it to the mountain lions and all wildlife to ensure their future in the Santa Monica Mountains.”

“We are honored to be a part of this incredible project and humbled by the opportunity to collaborate with the project partners in realizing this long-standing goal of habitat connectivity in southern California,” said Robert Rock, Principal and COO of Living Habitats LLC.  “It is safe to say that we would not be at this point, finalizing the design of this crossing with Caltrans and our incredible consultant team, if not for the initial vision of the scientists and researchers that identified this critical need and for the passionate support of the elected officials and local champions as this project nears realization.”

“Caltrans is proud to be a partner of this critical infrastructure project.  Recognizing that our transportation system needs to support our natural habitats and wildlife is an important consideration when planning and designing projects,” said John Bulinski, Caltrans District 7 Director. “This innovative structure, which is the largest of its kind in the world, is being designed to sustain native natural ecosystems while providing a safer transportation system for the motoring public.  Wildlife will have a safe passage over the US-101 freeway, and this will reduce the potential for animal-vehicle collisions.  A safer transportation system for all!”

“ARC is absolutely thrilled to be part of the outstanding collaboration working to ensure that the crossing at Liberty Canyon represents a worldwide model of excellence in design for the safe passage of people and wildlife, making it both a physical and symbolic bridge to the future for southern California’s wildlife including its treasured mountain lions,” said Renee Callahan, Executive Director for ARC Solutions.

Living Habitats is led by landscape architect Robert Rock, and his team includes globally-recognized wildlife ecologist, Tony Clevenger, who has worked on wildlife crossings around the world, including the ones in Banff, Canada. Also, part of the team is MacArthur Genius Award Recipient, Ted Zoli of HNTB, and the California-based design practice, Spiegel Aihara Workshop. Other subject matter experts supporting the project include, LimnoTech, soil scientist Ted Hartsig of Olsson, mycologist Efren Cazares, herpetologists Cheryl Brehme and Robert Fisher, and professors Richard Hindle, and Nicholas Pevzner.

Using a science-based strategy and an integrated design approach, Living Habitats has been working with Caltrans and the project partners on every aspect of the planning process. Unlike a traditional freeway overpass, the crossing will support wildlife and provide the habitat, shelter, food and water that individual species need to thrive. To achieve this, the top of the structure will be covered in nearly one acre of native vegetation. With the help of Caltrans and the National Park Service, Living Habitats is also collecting seeds, acorns and mushrooms that will be grown in a special project nursery. These will be planted on the site allowing the habitat to grow vegetation naturally throughout the site from the soil up. Native oak and willow trees sourced from the site will also be planted and nearly nine acres of space along the two adjoining slopes where the wildlife crossing will be built, will also be improved.

The crossing will be approximately 165 feet wide and because it will span 210 feet over ten lanes of pavement of the U.S. 101 freeway, it will rely on robust engineering and an innovative landscape design that will blend the structure into the surrounding mountain habitat. With as many as 300,000 cars passing through the freeway site daily, the crossing will also call for vegetated barriers to reduce the impact of vehicle traffic noise and roadway light on wildlife movement.

Among the experts that provided important review and feedback on elements of the design are Fraser Schilling with the Road Ecology Center at U.C. Davis and Rob Ament from the Western Transportation Institute. The project has also relied on the expertise of, ARC — Animal Road Crossing, an interdisciplinary partnership working to facilitate new thinking, methods, materials and solutions for wildlife crossing structures. In 2019, ARC and its partner the Ecological Design Lab conducted an integrated design workshop for project partners, key stakeholders, local residents, scientists, elected officials, and members of the Native American community.

To learn more about the #SaveLACougars campaign to build the Wildlife Crossing at Liberty Canyon visit https://savelacougars.org/. High-resolution images and graphics with titles in English and Spanish are available for the media here (image credit: Living Habitats LLC/National Wildlife Federation).