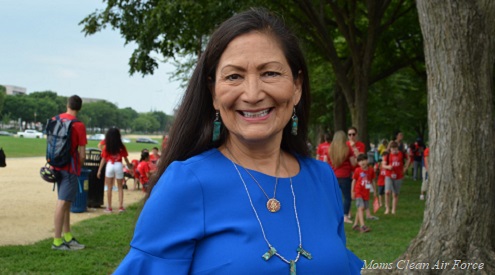 WASHINGTON, D.C. — The National Wildlife Federation and 45 state and territorial affiliates urged the U.S. Senate to quickly take up the nomination and confirmation of U.S. Representative Deb Haaland (D-N.M.) as the Secretary of the Interior so she can get to work on the wise stewardship of our public lands and waters, protecting our outdoor heritage for future generations, and honoring our commitments to Tribal and Indigenous communities.

In a letter, the conservation groups noted that Haaland was the best person to lead the agency at a time when America’s public lands face unprecedented challenges, including climate change, growing demands on our public lands, and growing threats from wildfires and natural disasters.

“Rep. Haaland has been a strong advocate for wildlife, hunters, anglers, and other outdoor recreation enthusiasts. She played a leading role in passing the Great American Outdoors Act, which permanently funded the Land and Water Conservation Fund — a critical program to ensure all Americans can access public lands to hunt, fish, hike, and recreate,” the letter reads.

The letter went on to highlight her unique ability to reach across the aisle to get bipartisan support for legislation and the unique role she could play in ensuring the federal government fulfills its Tribal treaty obligations: “As a Westerner, Rep. Haaland understands the myriad of challenges and opportunities facing public lands: from increased recreation pressures, to the potential role they will play in storing carbon, to the cultural importance they hold, to their role in providing critical wildlife habitat, to the need for responsible development.”

Haaland’s historic nomination signals the Biden administration’s intention to bring balance to public lands management and expand access to these lands for hunters, anglers, and all who enjoy the outdoors, which will create jobs and fuel rural economies. As the first Native cabinet secretary, her nomination also signals the administration’s commitment to working with Native American Tribes and Indigenous communities.