The Value of Autumn

Scientists know how leaves change color, but they don't know why 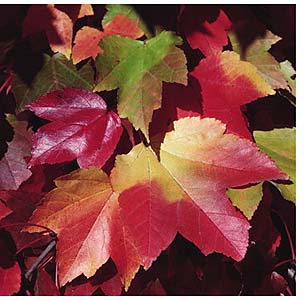 Like the painters, poets and leaf peepers, photographers have long been inspired by fall color. Take, for instance, Whit Bronaugh, whose images of leaves brighten these pages. Bronaugh grew up in the East, where he developed a deep appreciation for the visual spectacle that surrounded him each autumn. He later moved to Washington State and carved out a career as a nature photographer who captures a variety of themes on film. But one subject seems to be more compelling to him than any other: the simple beauty of autumn leaves. That's why every year he heads for the woods with his cameras, searching for extraordinary color. "It's a labor of love," he says.
He is, of course, far from alone. Getting out for the annual extravaganza is a joyful experience for millions--especially for those of us who live and work in heavily populated places where the colors are mostly those of concrete, steel and glass. I know something about that, having lived for one period of my life in Manhattan. Every October, religiously, I'd head north with my wife to Vermont to spend a weekend in the embrace of autumn.

During those outings, the sun seemed particularly brilliant, the skies intensely blue--a perfect backdrop for the hues that adorned the maples, birches and other plants of the region. For us, the trips north were both a pilgrimage and a desperately needed escape.

Therapists explain that the positive feelings people experience in autumn are hardly exclusive to those who wander in the woods. Studies show that fall colors have a mood-elevating effect on just about anyone, anywhere. "Put people in a room decorated with certain shades of red and they immediately feel less aggression and a sense of tranquillity," says Bernard Vittone, director of the National Center for Treatment of Phobias, Anxiety and Depression in Washington, D.C.

Like many other psychiatrists, Vittone believes a walk in the woods during autumn can be therapeutic. "We encourage our patients to take advantage of fall color," he notes. "A drive in the country makes people feel better, takes their mind off their troubles."

Autumn can also stimulate scientific musings: What causes leaves to change color in the first place? Where does the color come from? Does the change have a practical purpose in nature's scheme of things? And why are the colors spectacular one year, but in another year just so-so?

Essentially, leaf colors begin to change because chlorophyll--a substance that makes them green--begins to diminish as a result of shorter days and cooler weather. As daylight shortens, the growth system in many trees begins to shut down. Tiny cells at the base of each leaf, known as the abscission layer, begin to dry out, chlorophyll dissipates and the photosynthesis process comes to a halt.

The colors that now begin to emerge are actually present in the leaves all year long; they are pigments masked by the chlorophyll during the warmer months. The yellows of such species as birch, aspen and hickory are caused by carotene, the same pigment that gives color to corn, carrots and egg yolks. The autumn reds and maroons in sugar maples, sumac and other species derive from the pigment anthocyanin, formed from sugar compounds stored in the leaves. This chemical's effect on color depends on the acidity or alkalinity of the tree. Red maples, which are more acidic, turn red; ash trees, being alkaline, become purplish.

While scientists understand what causes the leaves to change color, they know virtually nothing about why they change. What role does this phenomenon play in nature's broad scheme of things? The answer may be none at all. In his book Leaves: Their Amazing Lives and Strange Behavior, researcher James Poling writes: "This is both surprising and puzzling, since nature seldom wastes energy to no purpose. Yet as far as botanists can determine, the chemical energy that goes into the painting of a leaf is of no benefit at all to the plant. The colors seem merely to herald the end of a leaf's life cycle."

While the phenomenon of autumn foliage may not have a purpose in nature's grand scheme, falling leaves (regardless of color) do perform an important role in forest ecology. As leaves decompose, they release carbon, nitrogen and other chemicals, providing nourishment to the soil that tree roots can assimilate the following season. Falling leaves also play an important role in forest stream ecology: As the wet leaves decompose, they are fed on by a group of aquatic insects and crustaceans called shredders--creatures including stone fly nymphs, isopods and crane fly larvae. Shredders, in turn, are an important food source for fish. Without them, fish would have a tough time of it.

Some years, leaf watchers have a tough time of it, too. That's because fall colors can sometimes be downright dull. The reason has to do with weather. Excellent color requires excellent conditions--a stretch of mostly sunny days and cool, but not freezing, nights. Excessive rain, a prolonged period of drought or an early freeze can each diminish autumn leaf color.

Meteorological vagaries, however, are not the only threats to widespread autumn color. Since the early 1980s, scientists have noted that in some areas of the country, sugar maples and some other species of trees have been declining. The result is wide swaths of dead and dying sugar maples, marring otherwise healthy forests. According to Susan Stout, a U.S. Forest Service researcher in Pennsylvania, 400,000 acres across the state's northern tier have been affected in recent years by such a blight, including about 90,000 acres of the Allegheny National Forest.

Scientists at the Environmental Resources Research Institute (ERRI) at Pennsylvania State University have found several possible causes for the sugar maple decline, including repeated attacks by pests, competition from invasive plants and low nutrient availability. The latter may be due in part to acid rain. "Acidification of the soil removes nutrients that are important to a tree's health," says ERRI researcher Patrick Drohan. "And to compound the situation, acid rain allows other harmful elements, such as aluminum, to increase in the soil solution, which can then become toxic to the tree's roots."

Because the problem is so complex, with so many possible causes, finding definitive answers can be tricky. "Acid rain, for instance, is a provable phenomenon," notes Drohan, "but the magnitude of its impact is hard to determine. We just don't know what role it plays in the big picture."

There is even uncertainty about the extent of the decline of sugar maples. Some woodlands that appeared to be hard hit a few years ago are now looking much better, leading some observers to suspect that much of the damage may be only a short-term problem rather than a sign of a long-range trend. One recent joint study between the United States and Canada--the North American Maple Project--concluded that in the last few years the annual mortality rate for sugar maples was "normal." Which, if so, is great news for photographers like Whit Bronaugh and leaf peepers like myself.

For those of us who eagerly await the annual autumn spectacle, there is little need for scientific explanations about what purpose changing leaf colors play in the environment. That it happens is perhaps reason enough to marvel at the power and unpredictability of nature.