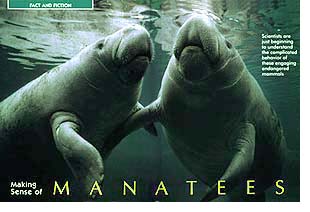 Among the habits of Florida manatees, one is particularly convenient for the biologists who try to keep tabs on these rare animals. "When the water temperature drops to about 68 degrees Fahrenheit, manatees start to move," says Jessica Koelsch, a biologist at Sarasota´s Mote Marine Laboratory. "But they don´t necessarily head south. Some actually go north to congregate in artificially warm water, such as the water around power plants." These wintertime reunions offer manatee-monitoring scientists a field day.

The hard part may be figuring out which way the animals will meander once spring comes. "Because manatees disperse so widely, the nonwinter months are when it´s most difficult to protect them," says Koelsch. In the summer of 1994, a headstrong Florida manatee dubbed Chessie was found swimming in the Chesapeake Bay and was airlifted home. The following summer, Chessie was spotted off Rhode Island. "We don´t know what he is doing up here," confessed U.S. Geological Survey biologist Jim Reid at the time.

Figuring out why manatees do things like this is crucial to ensuring their long-term survival. Fewer than 3,000 of the creatures remain in and around Florida today, and their future is uncertain. Manatee behavior has been studied in depth only in recent years, as the plight of this small but charismatic population--under pressure from habitat loss and frequent boat collisions--has garnered widespread public attention.

Rotund and wrinkly skinned, manatees do not look a bit like mermaids, with whom mariners such as Christopher Columbus supposedly confused them. Yet manatees are at or near the top of any ranking by popularity of wild animals in the United States. The Florida inlets and bays where they congregate in winter are popular tourist destinations. Unfortunately, the adaptations these animals have acquired over evolutionary time no longer suit the increasingly crowded waterways where they live.


"Manatees are an endangered species," says Koelsch. "To protect them, we have to understand their behavior." Knowledge of what they eat when, which waters they prefer and where they mate can help pinpoint, for example, where aquatic preserves might best be set up for the animals. But before they can lobby for manatee-friendly sacrifices like new sanctuaries and slower boating speed limits, wildlife managers need to arm themselves with convincing data.

A concerted federal, state and private effort, guided by the Florida Manatee Recovery Plan, is under way to learn more about manatee migration, life histories, reproduction and mortality. "Our ultimate goal is to help the animals achieve a self-sustaining population," says biologist Lynn Lefebvre, leader of the Sirenia Project, the U.S. Geological Survey´s manatee research program in Gainesville, Florida.

To help them identify and track individual animals, researchers with the Sirenia Project and other groups have compiled an identification catalog of more than 1,200 individual Florida manatees; the most useful identifying marks are the grotesque scar patterns left on the backs of the adults by fast-churning boat propellers.

The Florida manatee is equally at home in water that is fresh, brackish or salty. In the Sunshine State, the animal´s tendency to swim at or near the surface close to land results in more than 100 manatee deaths annually in collisions with boats. Its coastal habitat also subjects it periodically to red tide, a bloom of toxin-producing microbes that in the spring of 1996 killed nearly 150 of the animals.

Two subspecies, the Florida manatee and the Antillean manatee, which populates the Caribbean and the tropical Atlantic coast of Central and South America, constitute a single species known as the West Indian manatee (Trichechus manatus). Two other, comparatively little-known species of manatee inhabit the rivers of the Amazon basin and the coastal waters and rivers of West Africa. Manatees have Old World cousins in the dugongs, which live in the warm shallows of the Indian and western Pacific Oceans. Together, manatees and dugongs form the mammalian order called Sirenia (as in siren).

The first sirenians were grass-eating terrestrial mammals that lived some 50 million years ago. The oldest New World fossils, found in Jamaica, suggest a pig-sized, four-legged land animal. "It probably looked something like an otter crossed with a hippopotamus," says Daryl Domning, a professor of anatomy at Howard University who is studying the fossils. As later sirenians became aquatic, they evolved short paddlelike flippers in lieu of forelegs and a round, flat tail in place of hind legs. And they grew larger. A typical adult Florida manatee is 10 feet long and weighs half a ton, but some are three times as heavy.

"Manatees and dugongs are the only herbivorous marine mammals," says Tom O´Shea, a U.S. Geological Survey biologist who is a leading authority on the animals. Most of a manatee´s bones lack marrow cavities and so are unusually dense, possibly serving as ballast. "Manatees are hind-gut digesters," notes the scientist. "The aquatic plants they feed on are low-grade forage, which produces a lot of gas in their intestines." Without dense bones, manatees probably would be too buoyant to maneuver easily underwater.

In fresh water, manatees feed on aquatic plants such as water hyacinths; in saltwater, they eat mostly sea grass. Adults eat the equivalent of 10 percent of their body weight daily. Many of the grasses they consume are abrasive and the silt the animals stir up when bottom-feeding is even more so. Few animals have molars strong enough to withstand all the grinding. "So the manatee has hit on the trick of having throwaway teeth," says Domning. "Throughout the animal´s lifetime, new teeth keep erupting at the back of its jaw and move forward as the worn-down teeth in front fall out."

A puzzling feature of sirenian physiology is a surprisingly small brain. In an adult manatee, it´s about the size of a grapefruit--comparatively less than a quarter as big as the brain of most other large mammals, aquatic or terrestial. If its brain is puny, does that mean the manatee is less intelligent than other mammals? Roger Reep, a biologist at the University of Florida´s College of Veterinary Medicine who, with Tom O´Shea, has studied the matter, suggests that is not the right question.

"Instead of saying manatees have small brains, you can look at them as having very large bodies," Reep says. The pressures of natural selection have probably made large, bulky bodies advantageous to manatees over time. "First, they´re not chasing down prey," he adds, "and they aren´t preyed upon to any degree, so they don´t need elaborate behavioral repertoires for pursuit or escape."

That does not mean a manatee leads a dull-witted life, just a relatively uncomplicated one. Second, the animal has a low metabolism. Though this helps it avoid overheating in very warm surroundings, the creature still must burn enough energy to stay warm when conditions are cool. And living in water, it loses heat more easily to its surroundings than do, say, cows. "So you need a large body," Reep says. "If you´re bigger, you have less surface area in proportion to your weight, so you lose heat less readily."

The manatee´s unhurried life-style suits its low metabolic rate. Its normal cruising speed is a sedate two to six miles per hour. Food is usually abundant, leaving the animal free to spend as much as 12 hours a day sleeping, socializing or simply loafing at or near the water´s surface. When active, manatees ascend to breathe about once every five minutes; while resting, they may surface half as often, sometimes appearing to do so while half asleep.

Even their mating behavior, though energetic, is less frenetic than it is among many other mammals. A female in estrus will be followed by a small herd of males, several of whom may mate with her in succession. Manatees are not aggressive creatures.

Gestation takes a leisurely 13 months and nursing calves, usually born singly, stick close to mama for a year or more. (The species´ low birth rate is a factor in keeping its overall numbers from climbing out of trouble.) Without mishaps, an individual may live for 50 or 60 years.

The manatee´s lumbering pace is often blamed for its high mortality from boat collisions. The conventional wisdom is that the animal is too sluggish to get out of the way. Ed Gerstein, director of marine mammal research at Florida Atlantic University, is unconvinced. "A manatee is not all that slow," he says. "If frightened or excited, it can explode, moving 21 feet per second."

Gerstein wonders if the real problem is that manatees fail to hear the rumble of an approaching motor in time. To find out, he helped devise an experiment where captive manatees were trained to respond to underwater recordings of various sounds. "They pushed a striped paddle if they heard the sound, a solid paddle if they didn´t," says the researcher.

The test animals were most adept at hearing high-pitched sounds in the same range as their own chirplike vocalizations. Engine noise was near or below the bottom of their hearing range. A manatee would not normally notice a boat engine´s sound and direction, notes Gerstein, until it was about 50 feet away. "So if a boat´s moving toward them at 90 miles an hour, forget it," he says. He and his colleagues have proposed a measure requiring boats in Florida to affix underwater speakers to their bows to warn away manatees with high-frequency sounds, but the idea remains untested.

A number of marine sanctuaries have been set aside on the Florida coasts to serve as manatee refuges. This gives agencies like the U.S. Fish and Wildlife Service and the Florida Department of Environmental Protection a chance to educate visitors about the manatee´s plight. Federal guidelines allow divers and snorkelers to touch a manatee as long as the animal comes to them first and the swimmers touch it only with one open hand--an intimacy prohibited with other endangered species.

At least one researcher disapproves, however. "Manatees don´t have claws and they don´t have big teeth, which is unfortunate," says Patti Thompson, a biologist with Save-the-Manatee Club, a Florida advocacy group.

Manatees that solicit handouts or that seem to pose for photos are behaving unnaturally, says Thompson, pointing out that nonhabituated manatees are spooked by people standing on a beach. Gauntlets of underwater tourists in some areas, she argues, could interfere with natural behavior such as reproduction and nursing.

"People say, ´Oh, manatees are so sweet and gentle,´ but that´s anthropomorphizing," observes Thompson. "Manatees´ lack of predators has allowed them to evolve without the kinds of defenses that other animals have. They´re not being sweet and gentle. They´re being manatees."

Massachusetts writer Doug Stewart is a frequent contributor to this magazine.