A Fool for Tarsiers

Once ridiculed for his quest to save the Philippines´ tiniest primates, Carlito Pizarras is now viewed as a national treasure 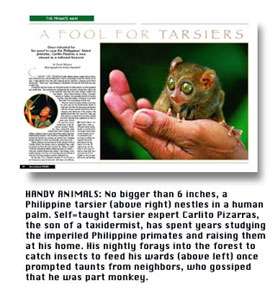 Carlito "Lito" Pizarras walks silently along a jungle trail on the island of Bohol in the central Philippines. Clad in camouflage, he listens closely for his prey. A high-pitched tone stops him suddenly and he snatches a chirping cricket from the ground. "That´s one," says Pizarras, a diminutive 45-year-old with dark eyes and a quick grin.

During the next two hours, he will catch nearly 50 other insects, as well as lizards and small frogs. The creatures are destined for his backyard, where they will be fed to tiny animals with huge eyes and suction-cuplike toes and fingers. These alien-looking critters, primates known as tarsiers, are normally fearful of people, but they cling like babies to Pizarras as he feeds them and coos reassuringly in their ears.

Pizarras started keeping tarsiers more than 30 years ago for his taxidermist father to stuff and sell. But his increasing fascination with the strange animals turned him into an observer and protector of the species. His nightly forays into the woods for bugs and other efforts on behalf of the tarsiers initially provoked ridicule from neighbors in this remote area. But in the past few years, researchers with advanced degrees (Pizarras only completed high school) have been coming to his village, seeking to know more about the curious and fast-disappearing animals. And recently a foundation for protecting the tarsiers has sprung up around him, bringing global attention to what was formerly a one´man cause.

When Pizarras was growing up in the remote town of Corella, Bohol, the tarsiers were so abundant they could be picked up from the trees around the village at night. Of all the animals his father stuffed and sold to tourists­­wild cats, monitor lizards and snakes - ­­the strange, monkeylike tarsiers were the most popular. Buyers told him it was as if God had created a perfect children´s toy.

By the age of 12, Pizarras decided to try to keep a pet tarsier in a cage at his house. But there was little information about the animals in the town library and, despite the fact that they were everywhere, nobody seemed to know about them. The only book that mentioned tarsiers said they ate charcoal. After a week on a diet of charcoal and water, his first pet died. After losing two more to the charcoal diet, Pizarras decided to find out for himself what tarsiers ate. He hiked into the nearby mountains in his thin rubber slippers, shorts and T-shirt to spend nights with the nocturnal creatures.

After weeks of patient observation, Pizarras finally saw a tarsier in the forest that looked like it might be eating charcoal, as the book suggested. The creature was digging its tiny hands into a burnt log, and its face was covered in black soot. But Pizarras could see that the tarsier was not feeding on the burnt wood; it was actually searching for insects buried inside the log. By the time he was 15, Pizarras was keeping a group of tarsiers alive in captivity on a diet of crickets. He later discovered that they eat a variety of insects and small creatures. 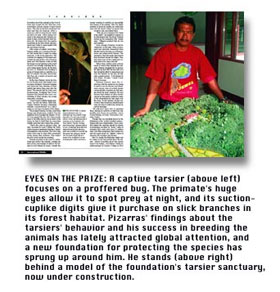 By the time Pizarras was in his 20s, he was keenly aware that tarsiers were no longer abundant. Rampant trapping and slash-and-burn farming of their habitat had driven them deep into the forest. The animals that he loved were disappearing. Realizing that it was trappers like himself who were contributing to their decline, the young man made a decision.

"I don´t want to kill the tarsiers anymore," he told his father. With that, Carlito Pizarras became a fledgling wildlife conservationist in a place where no one had even heard of the phrase.

The younger Pizarras, by then a part-time farmer and shopkeeper, couldn´t stop his neighbors from trapping the tarsiers. It wasn´t even against the law. But when people came to the little store he ran in front of his house, he tried to bluff them by concocting wildlife protection laws before they existed.

"That´s five years in jail and a fine," he said, knowing he wasn´t telling the truth, when someone mentioned trapping a tarsier. His neighbors were skeptical. The town´s tiny police force had to deal with communist rebels, among other problems. They weren´t about to arrest people for poaching.

Pizarras persisted in his quest to understand and protect the animals, working his farm all day and tending at night to the tarsiers he kept behind his house. Despite the species´ aversion to captivity, he successfully bred dozens of the animals. After the babies matured at about six months, he would hike deep into the forest, where he hoped they would be safe, and release them.

"Why are you creeping in the jungle every night?" his neighbors sneered as he disappeared into the forest. Pizarras picked up the derogatory title "tarsier man." Villagers gossiped that he was part monkey.

Soon enough, Pizarras would be vindicated. In the early 1990s, government and university researchers from Manila started showing up at Pizarras´ house and asking about tarsiers. The animals by then had nearly disappeared from the forest around his village. They only lived deep in the jungle and nobody knew how many were left.

When these visitors asked why he spent so much time helping the animals, Pizarras struggled for an answer. He had no idea that he was part of a tiny but global effort to understand and save the tarsiers. In the end, he had only a simple answer. "I just learned to love them," he said. "I didn´t want them to be gone."

Pizarras learned from the researchers that the animal he was trying to protect was an obscure and threatened species (one of several tarsier species globally; scientists are still arguing about the exact number). He also learned that studies of other tarsier species in Indonesia confirmed many of the observations he had made over the years. To his surprise, he also discovered that American primatologists were not able to match his success in captive breeding.

"We still don´t know how to maintain these animals in captivity so that they stay healthy and breed successfully," notes David Haring of Duke University´s Primate Center.

Though they are popularly known in the Philippines as the "world´s smallest monkey," tarsiers defy easy categorization. Some scientists believe the creatures should be classed as prosimians, an older (or "lower") order of primates that could date back 55 million years. But other researchers think tarsiers are part of a more recent (or "higher") order of primates, like monkeys and humans.

How to classify the Philippine tarsier and its cousins is just one mystery about the animal. "Almost everything about this species needs to be studied," says Sharon Gursky, an anthropologist at Queen´s College in New York who has researched tarsiers in the wild.

Some basic facts about tarsiers are known. With grayish brown fur and a nearly naked tail, the animals rarely grow to more than half a foot long. They are nimble climbers in the trees and hop like tiny kangaroos on the ground. They can leap as far as 10 feet (about 20 times their body length) to flee predators. Their huge eyes allow them to see well at night, when they hunt for crickets, beetles, termites and other creatures.

A female tarsier, which has about a six-month gestation period, produces one infant each spring. The infant is carried in its mother´s mouth and deposited in places safe from snakes, cats and other predators in the forest while the mother forages for food. The newborn tarsier can cling to branches almost immediately after birth and can leap after about a month. The creature can live for 12 years or longer.

But many aspects of Philippine tarsiers remain a puzzle: how many exist in the wild, which habitats they prefer and how they can be protected. Irene Arboleda, a graduate student at Adelaide University in Australia, is seeking the answers to these questions. Arboleda recently spent time in Bohol studying the animal´s home range, reproductive cycle and behaviors, with invaluable assistance from Carlito Pizarras. Though not a scientist, there were few questions he could not answer. "He´s been continuously exposed to the animal for 30 years, possibly longer than anyone else alive," said Arboleda. "He has substantial data, but it´s all in his head."

Pizarras´ knowledge has also been tapped by others: In 1991 the Philippine government sent researchers to his village to determine whether the tarsier should be declared a protected animal. IUCN, ­­The World Conservation Union responded by giving the species a priority rating of 4, meaning that it was vulnerable and threatened by habitat destruction and hunting.

Despite these actions, Pizarras saw little change in the tarsier's status. Finally, in 1996, a group of prominent Bohol residents joined together to help save the animal that made their island distinctive. With the support of the national government, they established the Philippine Tarsier Foundation.

"One of the reasons the founders were eager to put up the foundation was because Lito was already there," says Danny Nazareno, the foundation's administrator. "He was working every day to conserve the tarsiers and knew all about them. He gave us a head start." 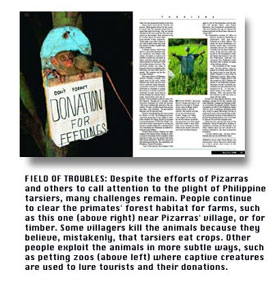 The foundation opened its office in Bohol´s capital of Tagbilaran in September 1997 and hired Pizarras as a field officer. The group has since established a research center and a protected breeding area in the jungles of Corella, not far from Pizarras´ house. In the past few years, due in part to the foundation´s work, the tarsier has found its way into the Philippines´ national consciousness. Few Philippine tourist brochures fail to feature an image of the striking creature.

The reputation of the "tarsier man" has also grown. Once regarded as eccentric and foolish for his lonely quest to save the primates, Pizarras is now feted by Philippine leaders. When England´s Prince Charles came to visit the country in 1997, Pizarras was invited to the Philippine presidential palace to make a symbolic presentation of a pair of tarsiers to the monarch-to-be. "It was like a dream being in the palace," said Pizarras. "But I was nervous that the tarsiers would run away or jump onto the prince."

Despite the international attention, many challenges remain for the tiny primates and their defenders. Logging and farming continue to decimate the animals´ habitat. Human population growth in the Philippines brings with it a host of problems including house cats, which at night kill tarsiers for fun as much as for food. And some farmers continue to kill tarsiers because of the mistaken belief that the animals destroy crops. In actuality, they eat the pests that damage crops.

Pizarras now spends his days at the Philippine Tarsier Foundation, helping to maintain a sanctuary for the animals. And when visitors show up, he's proud to introduce himself by his once derogatory nickname.

"I'm the tarsier man," he says with a friendly grin and an outstretched hand.

Philippines-based writer Floyd Whaley and photographer Kevin Hamdorf collaborated on a story about land mines in the March/April 2000 issue.