A Killer Gets Some Respect

In Hawaii, scientists are helping to dispel some myths about tiger sharks 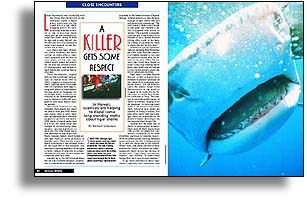 LOUISE SOURISSEAU was snorkeling with her friend Martha Morrell on the Hawaiian island of Maui when Sourisseau felt the rough skin of a tiger shark dragging across her calf. Sourisseau watched in horror as the 10-foot-long shark swam past her and repeatedly attacked her friend, biting off both her legs and an arm. Morrell, the 42-year-old wife of a plantation owner, died instantly on that November day in 1991.


Less than a year later, 18-year-old Aaron Romento was body surfing on Oahu when a tiger shark appeared and bit him in three places on the right leg. Surfers nearby pulled him ashore but the bites had severed Romento´s femoral artery, and he bled to death before they could get him to a hospital.

These two fatalities, coupled with six other confirmed shark attacks in Hawaii from 1991 to 1992, triggered a media frenzy. Shark sightings were front-page news in Hawaiian newspapers, along with photos of shark hunters hoisting catches as vengeance for the human deaths. A bill was introduced in the Hawaiian legislature to initiate a $200,000 program to send more hunters after the animals.

The initial response to the Hawaiian shark attacks was much the same as in the late 1950s, when tiger sharks killed a surfer. Back then the state launched a $300,000 program to get even, and nearly 4,700 sharks of several species died as a result. But many things had changed in the intervening three decades, causing legislators to pause this time. One change was a new awareness of and respect for Native Hawaiian beliefs, which viewed certain tiger sharks as sacred aumakua, or guardian spirits. There was also a new ecological consciousness that included respect for the ocean and its wild denizens. And there was a dawning awareness of the plight of sharks, millions of which die in commercial fisheries each year for each human that is reported killed by a shark.

Another key to the bill´s eventual defeat was the role of wildlife biologists, in particular 51-year-old Kim Holland, an associate researcher at the Hawaii Institute of Marine Biology. Holland pointed out that the basic biology of tiger sharks was not well understood a decade ago. "We didn´t know if shark control would do any good," says Holland, a native of England who moved to Hawaii. "The scientific community could not give sound answers as to whether or not a limited, focused fishing effort could in fact have any chance of catching the shark or sharks that did the dirty deed."

Holland and a group of graduate students, including Brad Wetherbee and Chris Lowe from the University of Hawaii, decided to look into this question shortly after the attacks in the early 1990s. The answers they found have helped to dispel some long-standing myths about tiger sharks and are leading to a less hostile attitude toward the fish in Hawaii and elsewhere.

Tiger sharks (so-called because they are striped, a feature most prevalent in juveniles) are found all over the world in tropical and temperate waters. On the Atlantic coast, the species ranges from Massachusetts in the north to Uruguay in the south. On the Pacific coast, it is found from Southern California to Peru. The creature is one of about 400 species of sharks worldwide, ranging from the deepwater 10-inch-long dwarf shark to the 40-foot-long whale shark. Several of these species are capable of biting a human, but great white sharks, bull sharks and tiger sharks are responsible for 99 percent of attacks, according to the International Shark Attack File.

Holland feels the public fear of sharks is unwarranted, however. There were 26 shark attacks from 1990 to 1997 in Hawaii with 3 fatalities, compared to 40 fatal drownings each year in Hawaiian waters. With 20 million people entering Hawaiian waters each year, the odds of being attacked by a shark are about one in five million. What´s more, only about one-fifth of those attacked by sharks worldwide are killed. Apparently sharks do not like the taste of human flesh. "Tiger sharks are efficient hunters," says Holland. "If sharks liked human flesh, we´d see a lot more fatalities."

To get more information about tiger sharks, especially their movements and home ranges, Holland and his fellow researchers needed to get transmitters on some of the fish. So they started setting fishing lines for sharks offshore near Honolulu International Airport. Thirty-yard leaders baited with fish heads were attached to a main line about 400 yards long. Tiger sharks hooked on these leaders could keep swimming- vital to the creatures since they must move to breathe. The baited lines brought in an average of one tiger shark a night.

To tag the animals, the biologists used an 18-foot Boston whaler that was not much bigger than some of the sharks they captured (which ranged from 7 to 14 feet in length). Hooked sharks were brought alongside the whaler, restrained with ropes and then flipped over. Once turned over, the tiger shark would go into a trancelike condition called tonic immobility. This allowed the biologists to surgically implant a transmitter without using an anesthetic. When completed, the hook was removed and the shark released.

The biologists noted that female tiger sharks had many scars on their backs. These wounds are usually a side-effect of mating, when males restrain females by biting them on the back and fins. Both male and female sharks have thick hides, however; one researcher describes the skin of a tiger shark as being 6 to 10 times the tensile strength of ox hide.

Sharks are equipped with several rows of teeth that when lost are replaced rapidly. (Some species of sharks may lose as many as 30,000 teeth during their lives.) Behind those teeth are powerful jaws armed with elastic muscles, which enable the fish to distend its mouth and swallow huge pieces of food. In Australia, one 11-foot tiger shark was found with an entire horse´s head, intact, inside its stomach.

Although horses´ heads are not a staple of the tiger shark´s diet, the creatures do have wide-ranging tastes. Smaller sharks eat mostly fish, along with birds, but as tiger sharks grow larger their diet switches to dolphins, other sharks and rays. Tiger sharks also go after seemingly inedible prey such as puffer fish, stingrays, triggerfish and sea snakes. Researchers aren´t sure how the sharks survive the barbs, bites and stings of these prickly prey.

Tiger sharks have a variety of sensors for locating prey. Like other sharks, they have a line of vibration detectors located along their sides that enable them to pick up the pressure waves of a moving animal. The sharks also use special organs below the skin of their snouts that allow them to detect faint electrical fields generated by living creatures. Sometimes the sharks pick up the electrical fields generated by motors and mistake them for prey, however. Bill Gilmartin, a federal government biologist who studied Hawaiian monk seals, reported a 12-foot tiger shark that burst out of the water behind his boat and engulfed the propeller with its jaws, lifting the entire craft.

Holland´s crew got used to tiger sharks banging up against its boat. The researchers tagged some 200 sharks and fitted 40 with transmitters that could be tracked by boats or listening devices set on the ocean floor. What the transmitters revealed was that tiger sharks travel long distances for their food.

All of the tiger sharks tracked swam more than 10 miles offshore in the first 24 hours after release and did not return to the area during the following 48 hours. It was not unusual for one of these fish to cover 30 to 40 miles a day. And though they eventually revisited monitoring sites, they did so on an irregular basis, with intervals ranging anywhere from two weeks to 10 months.

The implication of this discovery was that if tiger sharks don´t stay close to one area, "It makes no sense to kill sharks in the vicinity of an attack and expect to solve the problem," Holland says.

The local news media gave extensive coverage to Holland´s findings, and that helped quell the call for revenge in the Hawaiian legislature. Not everyone was happy with the idea of letting the sharks off, however. "If we had 30 people attacked in the last 10 years by wild dogs in Ala Moana Park [a seaside park near Honolulu], how many wild dogs would be in Ala Moana Park?" asked Jim Cook, chairman of the Western Pacific Fishery Management Council.

Surprisingly, another reason for the defeat of the legislation was a call for moderation from shark bite survivors. Honolulu author Greg Ambrose interviewed 10 victims of tiger shark attacks for his book Shark Bites and was amazed at the epiphany each had. "In every case the tiger shark actually had their teeth upon them and was biting into their flesh, but let them go," wrote Ambrose. "The lesson they learned was that the shark didn´t want the people, that their mighty fear of sharks had been totally unfounded. In most cases they´ve become eloquent spokespersons for sharks."

One of those victims was Jonathan Mozo, a photographer who lives on Oahu. On the morning of June 10, 1993, he was surfing at Goats, a spot on the north shore. Suddenly he felt a piercing pain and crushing pressure on his lower legs. He looked back and saw his feet and his board in the mouth of a tiger shark. As he watched, the animal opened its mouth and swam forward for a bigger bite. Mozo screamed, yanked his feet out of the creature´s mouth and paddled to shore as fast as he could. His friends put tourniquets around his ankles to keep him from bleeding to death, as surfer Aaron Romento had done a few months earlier. It took more than 100 stitches to sew Mozo back up, but he was surfing again only two months later.

Mozo expresses the feelings of many Hawaiians who have now come to accept the tiger shark as part of the marine environment. "I have no feelings of hatred against the shark," he says. "I don´t want revenge. I don´t think they should be eliminated. We are not the masters of sea. If it were our territory we´d have been born with gills and fins. I was out there a guest in his world. I just feel lucky he let me live."

Michael Tennesen, a frequent contributor to National Wildlife, swims in the ocean near his home in Southern California but worries more about automobile traffic on land than the sharks in the water.