Colorless in a World of Color 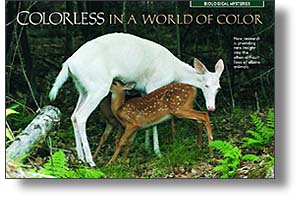 LAST SUMMER in west-central Wyoming, Dick Baldes saw something extraordinary. A resident of the expansive Wind River Indian Reservation, he was accustomed to seeing white-tailed prairie dogs, which range in the area´s shortgrass prairies. But he had never seen prairie dogs like these: about a dozen snow white, pink-eyed individuals scattered amid the hundreds of ordinary, earth-colored animals.


Baldes had worked for years as a biologist for the U.S. Fish and Wildlife Service and he knew this sighting was rare. So he photographed and videotaped the white creatures for three weeks. Then, seemingly overnight, the animals vanished. It wasn´t too difficult for Baldes to guess why.

"From a distance you can´t see the brown prairie dogs, but the white ones stood out like sore thumbs," he says. "They must have been pretty vulnerable to aerial predators like hawks and eagles."

The unusual prairie dogs were examples of a recurring phenomenon that is rare in nature. In a wide array of species--including humans--individuals occasionally are born lacking a normal complement of skin, fur, feather or scale pigments. As a result, part or all of their typical coloration is missing.

Most people know such animals as "albinos," which are distinguished not only by their pure white skin or fur, but also by their pink eyes. The pinkness comes from blood vessels that are normally colored, but in this case are unshielded by other pigment. Not all paler-than-usual animals are albinos, however. Some lack pigment everywhere except their eyes--a phemonenon called "leucistic" by biologists. Other animals that are partly white and partly colored are labeled "partial albinos," as, for example, a black raven with some white feathers.

Because albinism occurs unpredictably in the wild, it is difficult to study. But in recent years, scientists researching the phenomenon have gained new insight into the lives of both individual and entire populations of albino animals. And in some cases, biologists have found that, for better or worse, albinism is sometimes closely linked to human activities.

Though not widespread, albinism and its variants have been recorded in an astonishing array of animals, including more than 300 species of North American birds and such diverse creatures as whales, snapping turtles, salamanders and freshwater snails. It results from several factors, the most common of which is genetic. A gene that forms in the production of pigments mutates and fails to function properly. The resulting mutation can be passed down, generation to generation.

Since albinism is usually recessive, however, it generally manifests in offspring only when both parents carry the mutated genes. That´s one reason why the phenomenon remains rare. Mammalogists have estimated that about one in 10,000 births results in a true albino. In a recent study of more than 30,000 wild birds that were examined after they were temporarily captured in mist nets in Southern California, only 17--or about one-eighteenth of one percent--displayed any degree of albinism.

Occasionally, researchers have pinpointed particular causes for such color aberrations. Ornithologists have documented, for example, scattered cases in which birds grew white feathers following a sudden shock or injury, or as a result of old age. In the Ukraine, where the Chernobyl nuclear power plant accident in 1986 caused large-scale radioactive contamination, barn swallows subsequently showed a much higher rate of partial albinism than other, uncontaminated populations. The rate of partial albinism among swallows near Chernobyl jumped from 0 percent before 1986 to 15 percent in 1991.

Lack of normal pigmentation has also been seen occasionally en masse in amphibians such as toads and salamanders. Last summer, Oregon biologist Jay Bowerman found thousands of unusually pale individuals in a population of western toad tadpoles. "Approximately 1 percent of the tadpoles appeared to be virtually white," he says. "They appeared to lack any black or dark pigmentation." In the Oregon lake where Bowerman studied the creatures, the normal-colored tadpoles continued to develop and completed metamorphosis, while the white tadpoles did not progress beyond the early leg stage.

The scientist captured some of the white tadpoles and observed that they remained healthy even though they did not transform into adulthood. He surmises that the phenomenon could have resulted from a genetic mutation that disrupted the production of both hormones and pigments needed for metamorphosis. Eventually, the white tadpoles in the lake disappeared, while those Bowerman kept in an aquarium lived on, leading him to suspect that they were far easier for predators to find than the darker tadpoles.

Wherever they range, albinos do face a lot of obstacles to survival. Many albino birds, for instance, have brittle feathers that may be worn away more quickly than usual. Lacking a full complement of eye pigments, true albinos often have poor eyesight and are unusually sensitive to sunlight. What´s more, in many social species, odd-looking individuals are not accepted by their peers.

Researchers have observed shunned albinos among species as disparate as ravens, barn swallows and red-winged blackbirds. In studies of Adélie penguins in Antarctica, Jun Nishikawa of Japan´s Ocean Research Institute found that albino birds almost never find mates and are frequently pecked at by their peers. Because of such ostracism, the animals are less likely to reproduce and pass on their genes.

The effects of predation on albinos apparently vary according to the animals´ habitat and the type of predators. In the 1970s, University of Georgia researcher Donald Kaufman conducted a series of experiments with normal-colored and albino mice to see whether predators preferentially chose one or the other. When Kaufman released captive barn owls and eastern screech owls in enclosures containing one brown and one albino mouse, the owls generally pounced on the albinos. So did shrikes, but only when dense vegetation was present in the study area, thus allowing the brown mice to camouflage themselves better than the albinos.

When Kaufman repeated the experiment with shrikes in open areas, the avian predators captured more brown than albino mice. This led him to conclude that visually oriented predators use a particular search image. In areas with sparse cover, where both types of mice were highly visible, shrikes pounced on the brown mice they most readily recognized from past hunting experiences. The odd coloring apparently helped protect the albinos.

Other, more recent field experiments have further detailed the extent to which albinism is a handicap varies with the environment. In the early 1990s, a group of researchers from Miami University in Ohio trapped an albino meadow vole during a field study. By mating that male with darker, naturally colored wild females, and then mating the resulting young with one another, the team produced more than 100 albinos. These were released, along with the darker voles, in a grassy enclosure.

"I had read several articles about how conspicuous animals get picked out of a population first," says Gary W. Barrett, an ecologist who oversaw the study and is now at the University of Georgia. "We wanted to test that hypothesis under experimental field conditions." The researchers found that the albino young did not differ significantly from the other voles in body mass, which is an indicator of population fitness. In fact, the albinos had a greater rate of survival during late fall and early winter. The reason, say the scientists, had a lot to do with the quality of habitat.

The main predators on the test plots were raptors, which were stymied in their pursuit of both types of voles by dense, matted grasses, under which the voles could easily tunnel and hide. Later the researchers recaptured many of the albinos and darker voles and released them in a field where cover was sparse. The following year, they found quite a few naturally colored meadow voles but no albinos. "This work lends credence to the importance of quality habitat for conspicuous small mammals," says Barrett.

Sometimes the increased conspicuousness that comes with albinism can work to an animal´s advantage. That, at least, is the case in the southern Illinois town of Olney, where two pairs of albino gray squirrels were released in 1902.

The creatures soon multiplied into hundreds and they became the community´s beloved mascots. Today, the town´s official flag and police cars are adorned with pictures of a white squirrel, and fines are imposed on any automobile drivers who run over the animals.

Currently, about one-sixth of the community´s squirrels are albino and half of its normal-colored squirrels carry the gene for albinism that can produce more white offspring. "There are some albinos in the woods outside of town, but hawks, owls and coyotes attack them," says John Stencel, a biologist at Olney Central College who conducts a local albino squirrel census each fall. "They´re more susceptible because they´re easily seen in the woods." But in town, he observes, increased visibility can be a plus because motorists tend to see a white squirrel more readily than a gray one.

To help protect the animals, authorities have put up "squirrel crossing" signs throughout the community and instituted a leash law for outdoor cats. Local Boy Scouts have also mounted squirrel nest boxes in areas where there are not enough large trees to provide natural cavities. Last year, Stencel´s census found more white squirrels, and fewer free-roaming cats, than in 1998.

Still, the scientist fears that the albinos may disappear entirely within the next 20 years or so. "They go in cycles," he says, "and we´ve been seeing over the long term a drop in their numbers." He notes that any small, isolated population is more likely to disappear through chance events--such as disease or severe weather--than a large one. In that regard, albinos are just like their normal-colored cousins, and Olney is a microcosm for a world in which humans will have to work hard to help ensure the long-term survival of wild animal populations of all colors.

Arizona journalist Peter Friederici wrote about threats to pronghorns throughout their range in the American West in the National Wildlife Magazine October/November 1999 issue.