A Man Ahead of His Time 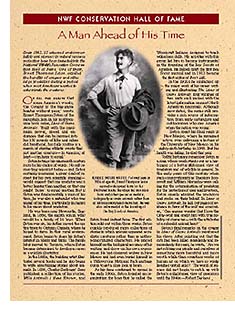 "Of all the beasts that roam America's woods, the Cougar is the big-game hunter without peer," wrote Ernest Thompson Seton of the mountain lion in his multivolume book series, Lives of Game Animals. "Built with the maximum power, speed and endurance that can be jammed into his 150 pounds of lithe and splendid beasthood, his daily routine is a march of stirring athletic events that not another creature--in America, at least--can hope to equal."

Seton betrays his nineteenth century roots by his choice of words. No self-respecting scientist today--and Seton certainly possessed a great deal of respect for his own scientific standing--would suggest that one predator was a better hunter than another, or that one might "hope" to equal another. But if Seton was fundamentally a man of his time, he was also a naturalist who was ahead of his time, particularly in regard to his views about predators.

He was born near Newcastle, England, in 1860, the eighth son in what would be a family of 10 boys. When Seton was six, his father moved the entire troop to Ontario, Canada, where he hoped to farm. In that rural environment, Seton began to share his father's interest in plants and birds. The family later moved to Toronto, where Seton became determined to develop a career as a wildlife illustrator.

In the 1880s, the budding artist illustrated several books and he also began to write entertaining stories about animals. In 1898, Charles Scribners' Sons published a collection of his stories, Wild Animals I Have Known, and Seton found instant fame. The first edition sold out within three weeks. Seton quickly produced more collections of stories in which animals appeared as realistic creatures rather than as anthropomorphized characters. He prided himself on the biological accuracy of his writing and drew on his own experiences. He had observed wolves in New Mexico and had even buried himself in a Yellowstone National Park garbage dump to get a close look at bears.

As his fame continued to spread in the early 1900s, Seton founded an organization for boys that he called the Woodcraft Indians, designed to teach wilderness skills. His activities with this group led him to become instrumental in the founding of the Boy Scouts of America. He helped draft the first Boy Scout manual and in 1912 became the first editor of Boy's Life.

In the 1920s he embarked on the major work of his career: writing and illustrating The Lives of Game Animals, four volumes of two parts each packed with the latest information on most North American mammals. Although now dated, the series still provides a rich source of information from early naturalists and outdoorsmen who saw America when the nation was young.

Seton spent his final years in New Mexico, where he remained active, even delivering a lecture at the University of New Mexico on his eighty-sixth birthday in 1946. But his health was failing; he died that year.

Today, historians remember Seton as a man whose work stands out as a harbinger of a better-informed view of predators and of wildlife in general. In the early years of this century when such conservationists as Theodore Roosevelt and William Hornaday were calling for the extermination of predators for the protection of deer and livestock, Seton openly admired the predators and spoke on their behalf. In Lives of Game Animals, he laid out pages of evidence in favor of the wolf and concluded, "Can anyone wonder that I love the Gray-wolf and credit him with true nobility of character--with the attributes of a splendid animal hero?"

Seton's final remarks on the cougar in Lives of Game Animals reinforced his views. After pointing out that the cats had been killed senselessly and remorselessly for years, he wrote, "Are we not robbing our people and ourselves of something more beautiful and more worth while than countless works of human art on which we have so wisely lavished untold gold?" The world of science did not begin to catch up with Seton's enlightened view of predators until the 1940s.