Dancing to an Ancient Beat

For four million years, albatrosses have returned to Midway Atoll every November to perform their mating rituals 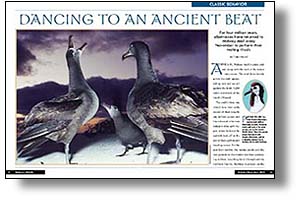 AT FIVE A.M., Midway Atoll is quiet, cold and damp with the start of the winter rainy season. The wind blows harshly across the dark lagoon, lashing mist and sea salt against the land, 1,200 miles northwest of the island of Hawaii.


The atoll's three tiny islands have been eerily devoid of their roughly one million Laysan and black-footed albatross residents since early August, when the last of the seabirds took off at the end of their eight-month breeding season. For the past four months, the mature adults and the new generation of juveniles have been journeying without touching land throughout the northern Pacific. Resting in groups on the ocean surface and gorging themselves on squid and flying fish, they have grown fat and ready for another season.

By 6:15, the first morning light shows on the horizon, and bird calls break the silence as the migrants start arriving at this remote region of the Hawaiian archipelago. In the air, they are the epitome of grace. But as they alight, the birds tumble and roll in the signature landings that earned them the nickname "gooney birds." One after another, they shake themselves off and begin searching the ground for the tiny piece of nesting real estate that is home base. The albatrosses' annual November invasion of Midway has begun.

For the past century, humans have battled wildlife for space in an attempt to transform 2,000-acre Midway from a sandy spit of scrubby vegetation into a strategic outpost suitable for their own occupation. In 1905, Midway was settled as a way station for laying telegraph cable across the Pacific. Ironwood trees were imported. Lawns were sown. In the 1930s, the site became a respite for travelers on Pan American's Trans-Pacific Flying Clipper Seaplane. A hotel and piers for cargo ships were built.

By 1940, Midway had evolved into a strategic U.S. naval base. Aircraft runways were paved on the two largest islands, Sand and Eastern. The ground was dug up for underground fuel storage tanks, and one end of Sand Island became a dump for hazardous chemicals. Collisions between albatrosses and military aircraft brought about the U.S. Navy's "bird abatement program," which destroyed more than 54,000 adult albatrosses between 1954 and 1964.

Then, six years ago, after a half century of habitat alteration, the Navy pulled out. The federal government spent $90 million tearing down most of the old buildings, cleaning up the leaking fuel tanks and removing contaminated soil. Midway was named a national wildlife refuge. Military uniforms were replaced with those of the U.S. Fish and Wildlife Service, and the human population was reduced from thousands at its peak in the 1960s to 150 residents today. The result has been good news for a range of wildlife, including 90 species of migrant birds (the Laysan albatrosses alone comprise the world's largest breeding colony of the species), green sea turtles and endangered Hawaiian monk seals.

Except for an unexplained decline among both Laysan and black-footed albatrosses on Midway over the past four years, the overall trend in the species' populations is inching skyward. One theory suggests that a growing appetite among humans for squid taken from the North Pacific could be depleting the main food source for the Laysan species. But scientists are waiting to see how many albatrosses return this year before sounding any alarms.

"At first we thought the decline might have been due to El Niño, which could have affected food sources for a lot of different species," says ornithologist Peter Pyle of the nonprofit Oceanic Society in San Francisco, which studies the albatross and operates conservation programs with the U.S. Fish and Wildlife Service. "But we will have to wait and see what happens this year," he adds. "Meanwhile, everything is looking pretty positive."

The U.S. Fish and Wildlife Service has been working over the past six years to restore habitat and continue studies of albatross behavior and other wildlife begun in the 1960s. Ironwood trees, which served as terrific windbreaks for humans, deprive albatross chicks of breezes needed to regulate their body temperatures. The trees have been eliminated from Eastern Island. Invasive plants called Verbesina produce beautiful golden crowns but elevate humidity and create sweltering conditions for the ground-dwelling birds. Guests are invited to uproot the plants at every opportunity. Native naupaka shrubs, which provide the best habitat for albatrosses as well as red-tailed tropicbirds, are being restored.

"Since the Navy left, the tide seems to be turning back in favor of the albatross," says former refuge manager Rob Shallenberger. "You can truly see the resiliency of nature at work." And once again this year they are renewing the cycle of life--courting, mating, nesting, hatching and fledging--that has repeated itself on the isolated atoll for at least three million years.

Male albatrosses return to Midway before females to claim and defend their territories. The birds normally nest within three feet of the spot they occupied the year before. They will continue returning to the same nesting site for life. Interlopers are warned with a sharp clap of the bill not to enter a defender's space. Fights sometimes break out with males biting each other and engaging in tugs-of-war. Their angry vocalizations need no interpretation.

The albatross, which lives to age 40 or older, mates for life, or until a partner disappears. As the females return to Midway, usually a week after the males, they too home in on their usual nesting site, plodding purposefully along the ground until they reach familiar territory.

The Laysans, which total about 2.5 million throughout the northern Pacific, are among the smallest of the 17 albatross species worldwide. On average they are about 31 inches long and have wingspans of 78 inches. Bonded pairs greet each other after a season at sea by touching bills, which are pink-orange with gray hooked tips. Birds of the black-footed species--about 300,000 in population--are darker and measure about 27 inches in length, with wingspans up to 85 inches. Fierce defenders, they will lunge and rip the flesh of a hand or leg to keep humans away from a nest.

Both species breed at the same time of year, and their nesting sites often overlap. It is not unusual to find black-footed birds nesting in the middle of a sea of Laysans. The prime real estate is along the atoll's western beaches in the naupaka, which provides thick foliage roughly four feet high to block the sun and plenty of room between the trunks of the hearty shrubs for maneuvering along the ground. More important, the ocean breezes easily pass through the naupaka near the ground to cool chicks during the hot days of spring and summer.

But any place on the atoll that isn't paved will become occupied as the birds nest. Cracks that are appearing increasingly in the abandoned runways on Eastern Island (bombed during World War II) also are gaining favor as nesting sites among young adults, like subdivisions in the 'burbs of a bustling city. Males that have not yet bonded with females often stake out nesting territories in these unclaimed regions and attempt to solicit passing females.

After an experienced pair reunites, the birds often mate within 24 hours. They then circle the site where they will build their nest, touch bills, preen and communicate with soft vocalizations. Then the birds return to sea for about eight days and feed. When they return, they build the nest, usually only a day or two before the female lays her single egg. The nests are little more than scooped-out areas with grass built up to circle the depression. But they also feature a critical moat dug by the birds to keep away water from the often torrential rains.

Incubation takes about two months, and the males and females share nest duties, allowing one to feed at sea while the other protects the egg. When a partner returns, it pushes the other from the nest, dips its head to the egg and utters eh eh. After the chicks hatch, the parents feed them a nutrient-rich diet of regurgitated fish, squid and oil. Chicks stimulate feeding by touching the parent's bill. For juveniles, this is the time to snag a mate of one's own, or at least to practice courting. Aside from occasional squabbles, the islands are filled with a cacophony of vocalizations that accompany the ritualistic courting dances. The noise begins just before dawn and continues into the night. New human arrivals, unaccustomed to the volume level, complain of being kept awake by juvenile revelers until the wee hours.

In addition to using calls, the birds communicate with their bills. Sharp clacks are warnings as humans approach a nest. During a courtship dance, birds issue pleasing rapid-fire claps between vocalizations. Sometimes soft claps comfort a mate or chick. By early February, wobbly chicks stand in their nests blinking at the world with ebony button eyes. They hiss and clap their bills at human passersby.

Juveniles intent on finding mates take every opportunity to dance, changing dance partners dozens of times a day. "When they first begin courting they do a lot of watching older juveniles court," says Pyle. "They need to practice." The moves of the dance, which appear to have up to 25 components, are critical to bonding. Among less experienced dancers of the same species, the one who misses a move is often left dancing alone. "You can see that the younger ones aren't doing it as well as the others," adds Pyle. "I think the first year they return they walk around a lot and watch."

When the dance clicks and the pair completes the ritual, the two may form a permanent bond, even if the birds haven't reached egg-laying maturity, which occurs at about age 10. At the end of a successful dance, the birds engage in symbolic nesting by clipping grass with their bills and preening each other's heads and bodies.

Occasionally hybrids are hatched from apparent mating by black-footed males and Laysan females. These unfortunate offspring end up with a combination of the two species' separate dance moves, which makes them the wallflowers of the island. Because they are hatched to Laysan mothers, the hybrids are imprinted on the Laysan species. Male hybrids wander the atoll and engage Laysan females in the dance only to be rebuffed at their first black-footed dance step. But during the last season here, two hybrids seemed to find each other. No one knows yet if the outcasts will have their own offspring.

By May, the chicks that hatched this year will be nearly full grown and sport both feathers and down. Some will look like they wear mohawks. By July, those that survive dehydration and the heat--or such hazards as mites, avian pox and starvation--will make their way to the beach. The stronger birds will take off into the wind and fly beyond the lagoon. Weaker fledglings will flap about and practice short flights in the lagoon, where a gauntlet of tiger sharks awaits their tender bodies. One in ten of the fledglings that have survived to this point will become food in the chain of marine life.

By early August, the 150 human residents will find it difficult to sleep for a few nights because of the lack of noise. And many will find themselves longing for the albatrosses' return in November.