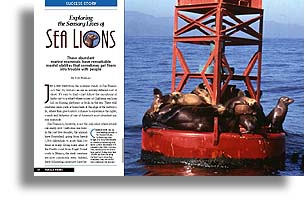 Just a few steps from the souvenir stands of San Francisco´s Pier 39, visitors can see an entirely different sort of show. It´s easy to find--just follow the cacophony of barks out to a wharf where scores of California sea lions loll on floating platforms or frolic in the sea. These wild creatures seem quite at home here at the edge of the metropolis, where they give tourists a chance to experience the sights, sounds and behavior of one of America´s most abundant marine mammals.


San Francisco, however, is not the only place where people can easily spot California sea lions. In the past few decades, the animals have flourished, going from barely 1,500 individuals to more than 100 times as many. Along many areas of the Pacific coast from Puget Sound south to Mexico, the sleek creatures are now commonly seen. Indeed, these fish-eating carnivores have become such a conservation success story that they now rival fishing fleets in the amount of fish they consume. In a few cases, where they feed on salmon runs that are already critically depleted, they have begun to cause conservation problems of their own. But as experts are discovering, sea lions are much more than an annoyance. Bright and adaptable, they display remarkable mental skills and unique adaptations to their amphibious lives.

Early in this century, few people would have thought that the animals could ever do so well. By the 1920s, decades of commercial harvesting had left only a few hundred remaining sea lions along the California coast. But as demand for pelts and blubber slowed in the 1940s, the animals´ numbers began to inch upwards. The population really took off in 1972 when Congress passed the Marine Mammal Protection Act, which curtailed almost all intentional killing or harassment. Today, about 170,000 California sea lions live on the West Coast; nearly half of them breed each year at what might be called Sea Lion Central: the Channel Islands off Santa Barbara.

The festivities start in June, when the prime adult males stake out breeding territories on the beach, just a few weeks after the females bear the previous year´s pups on land. Like movie stars in Malibu, sea lions prefer beachfront real estate--not for the view, but because the water helps them keep their thickly insulated bodies from overheating. Bulls maintain their claim by constant barking; they often charge at an intruding male who gets too close. If the interloper refuses to back down, the bulls may battle for several minutes, battering one another with their chests and necks and nipping at their opponent´s vulnerable flippers. Yet unlike the even larger elephant seal bulls, which often trample pups in the heat of battle, sea lion bulls display a surprising delicacy.

"Many times I have seen them in hot pursuit of another male, and they will run around a pup or lift a flipper to avoid it. They seem to try hard to avoid squishing pups," says Carolyn Heath, a behavioral ecologist at Fullerton College who has spent years observing sea lions.

All this struggle doesn´t guarantee mating success to the winners. It only earns them a place in the lineup. When mating time finally comes, it is the females that select which males to breed with. "Males make the first cut among themselves, but females make the second cut," says Heath, noting that experts do not fully understand how the females make their selections.

Whatever their reasons, the females on a given beach usually arrive at the same choice: Just a few of the bulls do most of the mating. At one beach Heath monitored in Mexico, for example, one of the four territorial males mated with 17 of the 18 females that year.

Most males don´t breed at all in a given year, but as they grow older some will eventually hold territories and mate. Some younger males even go through a kind of apprenticeship by moving onto vacated territories after the peak of the breeding season, then going through the motions of defense. "Presumably, that´s how they learn to be a territorial male," says researcher Ronald Schusterman of the Long Marine Laboratory of the University of California-Santa Cruz.

Unlike the males, which have little chance of siring pups until at least 8 years of age, females begin reproducing at 4 or 5, and bear a single pup most years until well into their teens. That works out to be a population growing at a phenomenal 8 percent per year during good times.

But those good times are punctuated by occasional bad ones. During El Niño years, eastern Pacific waters grow warmer and less productive, and the anchovy, herring and other fish that form the sea lion´s diet become scarcer. That forces the animals to work harder to find less food, meaning fewer females can muster the energy for a successful pregnancy. Pups feel the crunch, too, because their mothers must leave them ashore alone for longer stretches between nursings. During the most severe El Niño on record in 1998, the number of pups in the Channel Islands plummeted to 14,000 from 41,000 the year before.

Even in good years, mothers and pups are often apart. Starting within a week of the pup´s birth, its mother heads off to sea to feed for up to 48 hours at a stretch. After each trip, the animals find one another by picking out each other´s voices amid hundreds of sea lions in the rookery. Only rarely do either mother or pup make a mistake.

When Schusterman recorded females´ calls, he found that each one differed a bit from the others in tone and cadence. The mother starts training her pup to recognize this from the moment of birth, when she barks straight into its face. "It´s as if she´s trying to get the pup to pay attention to her voice to the exclusion of all the other voices around them," he says.

Thanks to two trained sea lions at Long Marine Laboratory named Rocky and Rio, Schusterman is now expert at understanding how sea lions gather and process information. For instance, when he tested Rocky and Rio´s hearing, he found their ears work better in air than underwater, just like a human´s. That´s not surprising.

On the other hand, a sea lion´s eyes are best suited for spotting potential prey underwater, even in darkness. "The sea lion is like a cat gone to sea as far as visual acuity is concerned," says Schusterman, who has tested the animal´s vision using a modified eye chart. While the sea lion can see well on land in daylight, it has spherical lenses like fish have for best focus in water and shiny reflective coatings behind the retinas to make the best use of dim light.

The sea lions´ mental abilities are even more impressive. More than a decade ago, Rocky showed she could master a simple sign language. Rocky and Rio have also shown that they can classify objects into abstract categories. For example, when researchers flashed cards on a special picture board, Rio quickly learned to match a number with another number rather than a letter of the alphabet (though, of course, for Rio both numbers and letters are merely arbitrary shapes). After that, once she knew a new shape was a number, she would match it with any other number she knew, even if she had never paired the two before. "Any of the numbers is now the equivalent of all the others and the new number. Automatically. So the animal makes that logical leap that a number is a number is a number," says Schusterman.

That skill--which many scientists once thought was only possible through the use of true language--probably serves the sea lions well in the wild. A territorial bull may learn to recognize a neighboring bull by sound, sight and even smell, Schusterman notes, and any of the three senses means the same thing. And in recent decades, some wild sea lions have also learned an equivalence between a type of fishing boat and the fish it catches. "Those kinds of boats are related to salmon, these kinds of boats are related to herring, and the sea lions can pick and choose," says the scientist. "The boat is the equivalent of the fish."

Sea lions´ quick wits can sometimes cause headaches for conservationists, however. The biggest problem comes when sea lions learn to feed on populations of salmon or other fish that are already dangerously depleted due to human activities. In Seattle, for example, a small population of steelhead climbs a fish ladder at the Ballard Locks each winter to spawn in Lake Washington. Even at the best of times, only 2,500 fish spawned there, so biologists took notice when sea lions began eating them.

"The animals figured out that if they camped out at the base of that fish ladder, they could eat steelhead every day," says Brent Norberg, a National Marine Fisheries Service (NMFS) biologist. By the winter of 1993-94, an all-time low of just 70 fish made it past the sea lions to spawn.

But the story ended happily for everyone when biologists determined that just a few sea lions accounted for most of the steelhead predation. "Our argument was that if we remove the bad actors, the problem would likely be eliminated in the short term. And that´s what happened," says Brian Gorman, an NMFS spokesman. Biologists relocated the three troublemakers and the problem vanished almost overnight. Now, sea lions rarely show up at the locks and the steelhead run has grown to 600 fish.

Not every fish problem may be so easy to solve, however. In California´s Monterey Bay, for instance, many sea lions have learned to follow boats and eat hooked fish before the fishermen can haul in the line. "Once they´ve learned there´s this ready food supply that´s already caught, it´s the perfect food item," says Jim Harvey of Moss Landing Marine Laboratories on Monterey Bay. In one survey of fishing boats in the bay, Harvey found that about 20 percent of hooked fish end up in a sea lion´s belly instead of the boat--much more than just a few delinquents could account for eating.

Fishermen used to shoot marauding sea lions until the practice was outlawed. Even now, some sea lions die each year from gunshot wounds and biologists presume, but cannot prove, the animals were shot illegally.

The solution, some experts say, is not to remove the sea lions but to accept their presence and find other ways to improve fishing practices. "For millions of years, there were lots of California sea lions and lots of fish," says Heath. "There´s no doubt that sea lions do eat plenty of fish, but in the long run, I don´t think that harvesting sea lions is going to make much difference in how many fish are available."