How Rachel Carson Helped Save The Brown Pelican

One of America's most charismatic coastal birds is thriving again, thanks in part to a biologist-turned-author 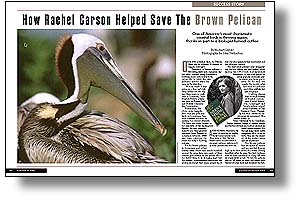 Once upon a terrible time, the Pelican State lost its pelicans. It seemed to happen overnight.  Thousands of brown pelicans--fish-eating birds with capacious, dip-net bills--nested along Louisiana's southern shore until well into the 1950s. But by 1963, the only pelicans around were the ones on the state flag.

"Nobody knew it was going on--they just suddenly looked out one day and there were no pelicans in Louisiana," says Stephen Nesbitt, a biologist with the Florida Fish and Wildlife Conservation Commission.


Fortunately, the story ends happily. Not only are pelicans back in Louisiana, they now number 50,000, according to a recent estimate. The birds are there thanks to the mandates of the Endangered Species Act and conservationists who transplanted nestlings from Florida to Louisiana between 1968 and 1980, planting the seeds for today's thriving colonies.

But the brown pelicans in Louisiana and other coastal states where they nearly vanished around the same time owe much of their current good fortune to one person. She is the closest thing to an avenging angel that the modern environmental movement has produced, except that many people say it was she who spawned that movement, not the other way around.

She died while pelicans were disappearing, but not before she had written Silent Spring, the 1962 book that awakened Americans to the peril posed by newly popular chemicals, particularly synthetic pesticides. In the end, she made the world safer not only for pelicans and other wildlife, but also for people.

"I tell my classes that we're all children of Rachel Carson," says Daniel Anderson, a biologist and brown pelican expert at the University of California at Davis. "Basically, her work started the environmental movement. She stirred things up."

From California to the Carolinas, brown pelicans forage in coastal waters and farther offshore and nest in colonies on small coastal islands. Although large birds (with wingspans of six to seven feet), they are the smallest of the world's seven species of pelicans.

The brown pelican has exceptional vision and can spot fish from as high as 60 feet above the water. Diving headfirst after its prey, the bird surfaces with its catch contained in a long bill with an expandable pouch. To eat, the pelican tilts its bill down to drain out water, then throws its head back and swallows the fish. That taste for seafood set pelicans up for poisoning from pesticides.

During the late 1960s, Anderson saw brown pelican colonies on islands off Southern California shrink by more than 90 percent. He and other scientists fingered the pesticide DDT as the pelicans' problem. A chemical plant had been discharging thousands of pounds of the pesticide into Los Angeles County sewers for decades; the poison waste entered coastal waters where it was absorbed by anchovies and other fish eaten by pelicans.

California's pelicans were not killed outright by the DDT in their bodies. Rather, the chemical altered the birds' calcium metabolism so that they laid eggs with thinner shells. So fragile were those shells that pelican parents trying to incubate eggs instead squashed them into omelettes. DDT-caused shell thinning helped exterminate peregrine falcons in the eastern United States, and ravaged the populations of bald eagles and ospreys, among other species. 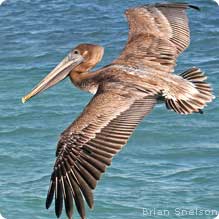 In Louisiana, the pesticide endrin was the prime suspect in pelican extirpation. "No one knows for sure, because we didn't have any samples until well after the fact," says Lawrence Blus, a recently retired wildlife-toxicology specialist who investigated the pelican crisis for the U.S. Fish and Wildlife Service during the 1970s. "But what we do know about endrin was it was causing massive die-offs of fish in the estuaries down there. Five million menhaden, which are small marine fish that the pelicans feed on, died in one episode." Also a likely cause of catastrophic pelican declines in neighboring Texas, endrin is an acute toxin that probably killed pelicans directly. Assailed by pesticides almost everywhere in the United States, brown pelicans were listed as endangered throughout their range in 1970 (under a law that preceded the Endangered Species Act of 1973).

In Silent Spring, Rachel Carson labeled pesticides "elixirs of death." Alarmed that the chemicals were being sprayed on farms, forests and towns with little foreknowledge of their effects, she wrote that she was not opposed to controlling pests, but "the methods employed must be such that they do not destroy us along with the insects."

One of those deadly elixirs was originally hailed as a wonder poison. First synthesized in 1874, dichloro-diphenyl-trichloro-ethane, or DDT, was later discovered to be a potent insecticide. Used in World War II to dust soldiers and refugees for lice, and later to combat mosquitoes that spread malaria, DDT was deemed so beneficial that the Swiss chemist who identified its insecticidal properties was awarded a Nobel Prize.

However, it wasn't long before scientists and nature lovers became aware of DDT's dark side. In the United States, spraying to kill beetles that spread Dutch elm disease left backyards littered with dead robins in the 1950s; the birds had eaten the earthworms that had fed on poison-coated leaves.

Carson reported the toll that elm-disease spraying was taking on robins along with gnatcatchers, warblers and other birds. She told of threats to bald eagles from programs meant to kill mosquitoes, and of a chemical war against Japanese beetles that was annihilating rabbits, muskrats and squirrels along with songbirds. She wrote in Silent Spring, "These sprays, dusts, and aerosols are now applied almost universally to farms, gardens, forests, and homes--non-selective chemicals that have the power to kill every insect, the 'good' and the 'bad,' to still the song of birds and the leaping of fish in the streams, to coat the leaves with a deadly film, and to linger on in soil--all this though the intended target may be only a few weeds or insects."

Biologist George Woodwell, founder and director of the Woods Hole Research Center in Massachusetts, heard from Carson in the 1950s, when she was researching Silent Spring and he was a young faculty member at the University of Maine. The state was spraying DDT on forests from airplanes to battle spruce budworm, and Woodwell was studying the pesticide's impacts. "They were spraying whole drainage basins, and you couldn't avoid the streams with aerial spraying," says Woodwell. "It was killing fish, and DDT was accumulating in the soils and elsewhere. It was a bad show."

Carson, who early in her career worked as an aquatic biologist for the federal government, mined pesticide data for Silent Spring from scientists, former government colleagues and naturalist friends. "She managed to put together what really were shards of evidence and formulate them into a clear picture of what was happening in nature as a result of the accumulation of toxic substances," says Woodwell.

From those shards, Carson crafted her indictment of the chemical companies and government agencies that, in the name of pest control, were waging war on the environment. "As crude a weapon as the cave man's club, the chemical barrage has been hurled against the fabric of life," she wrote.

For her trouble, she was called a communist and a hysterical woman. In a September 28, 1962, book review, Time magazine accused Carson of publishing "downright errors" and "scary generalizations." Chemical-industry trade groups, agricultural journals and other opponents of pesticide restrictions published attacks on Silent Spring. One pesticide manufacturer threatened legal action in an attempt to prevent publication of the book. Instead of being suppressed, Silent Spring rocketed to number one on The New York Times best-seller list.

Rachel Carson died of breast cancer in 1964, two years after presenting modern environmentalism with its bible. The fervor generated by Silent Spring led to a nationwide ban on DDT in 1972. The ban was rendered by the Environmental Protection Agency, a federal bureau that might not have come into being, in 1970, without Carson's wake-up call.

With DDT no longer in use, bald eagles that were once threatened with extinction in the contiguous 48 states have increased from roughly 400 nesting pairs in 1963 to more than 5,700 pairs today. As a result, the federal government in July formally proposed removing them from the country's Endangered Species List.

The brown pelican's lot has also improved. Birds on the Atlantic Coast were taken off the list in 1985 as the number of pelican nests rebounded dramatically. In Louisiana, a restocking project has helped bring the birds back. Over a span of 12 years, more than a thousand nestlings were captured from pelican colonies in Florida (where brown pelicans had not declined) and trucked to Louisiana for release at three sites. Since the restocking ended in 1980, Louisiana's pelicans have established new colonies on their own. The birds have probably also benefited from the absence of endrin, banned since 1984. Experts say Gulf Coast pelicans will soon follow their Atlantic Coast relatives off the endangered list. "It's been a long journey but a successful one," says Larry McNease, a Louisiana Department of Wildlife and Fisheries biologist.

Even Southern California's brown pelicans have recovered ground, although they are likely to remain classified as endangered for the time being. With the population at roughly 5,000 pairs now, says Anderson, "It's pretty much back to what we figured were close to historical numbers."

But these successes do not signify an end to the chemical threat to wildlife. Banned in this country nearly three decades ago, DDT still persists in the U.S. environment. Elsewhere, many countries continue to use it to fight malaria. Since the ban on DDT, new pesticides--organophosphates and carbamates--have been developed that degrade more rapidly in the environment but are more acutely toxic. "Even very small amounts can cause really severe poisoning," says Mary Deinlein, a biologist at the Smithsonian Institution's Migratory Bird Center. According to the center, more than 150 bird die-offs, some involving hundreds of birds, have been blamed on diazinon, an organophosphate insecticide used on lawns. Overall, pesticide use in the United States has increased since publication of Silent Spring. The center estimates 67 million birds still die every year from exposure to pesticides on U.S. farms.

"The problem hasn't passed, we haven't solved it," says Woodwell. But how much more damage would pesticides have caused had Silent Spring never been written?

"That book, it got people thinking it was time to do something," says McNease.

To Rachel Carson, there was never a question of doing nothing. As she once explained of her crusade, "There would be no peace for me if I kept silent."

Washington, D.C., writer Michael Lipske is a frequent contributor to this magazine.