Into the Sea with Giants

So why would you want an up-close encounter with a 60-ton bowhead whale? 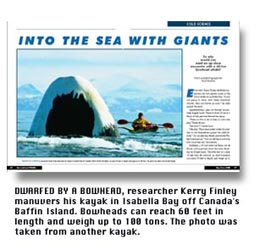 ECOLOGIST KERRY FINLEY skillfully maneuvers our two-person kayak in the 6-foot swells of icy Baffin Bay. "If you are going to swim with these bowhead whales, then you better go now," he yells against the wind.

Apprehensively, I peer out through my partially fogged mask. There in front of me is a flurry of tails, pectoral fins and sea spray.

"There are five or six of them in active sex play," Finley shouts.

"Sex play. The young males jockey for position to rub themselves against the adult female." An ear-piercing shriek punctuates Finley´s commentary. "You can tell this is active by how vocal they are," he screams.

Suddenly, a 20-foot-wide tail flicks out of the sea and hangs high above the water, dwarfing our fragile kayak. The little boat is a mere 18 feet long. By contrast, an adult bowhead can reach 60 feet in length and weigh up to 100 tons. Along with the fin whale, it is second in size to the blue whale, the largest animal on Earth.

Finley, an independent biologist, is an old hand at bowhead research. He has been observing the eastern Arctic population of these animals since 1983. His study group, at Isabella Bay in the Canadian territory now known as Nunavut, can number up to 90 whales at any one time, by far the largest concentration left in the species´ North Atlantic range. In all, there are about 700 animals remaining here in the North Atlantic, a far cry from the 7,000 left in the North Pacific.

A second group of North Atlantic bowheads appears along the ice edge on the northwest side of Baffin Island near Igloolik. Susan Cosens from Canada´s Department of Fisheries and Oceans, along with investigator Brad Parker, has been studying these whales for the past six years. 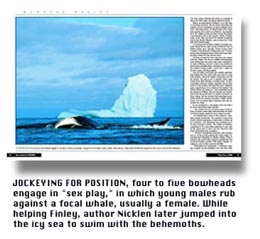 All three researchers have had close encounters with the whales. For me as a wildlife photographer, such interactions are newer and more unexpected. As part of Finley´s project, I have been invited to shoot photo identifications, including pictures from the whale´s vantage point­­in the sea. I really am about to swim with these giants.

Like all whales, bowheads are sensitive creatures and getting into the water with one must be done with caution­­from the whale´s standpoint, not just the diver´s. The idea is not to displace these huge beasts from their feeding or resting areas. In fact, swimming with any marine mammal can be hazardous to the animal, and harassing one is illegal in many jurisdictions (it is outlawed throughout the United States, for instance). I am swimming under the guidance of Finley, who has permits and permission from the local Inuit to conduct research on these whales. He has decided that capturing underwater photo-ID images warrants a slight disturbance, but we always allow ourselves just one approach per whale.

In my excitement, I can barely focus on what I do know about these huge animals:

The whale gets its common name from its looks; its huge curved skull, approximately one-third of its body length, results in a bow-shaped mouth.

Its primary food source is the copepod, a rice-sized marine crustacean. The copepod is one of the world´s richest organisms; a dried gram contains up to 8 calories. One bowhead can consume up to 50,000 copepods a minute. The whales use baleens, consisting of 700 bony plates attached to each side of the upper jaw, to sieve out the copepods and other small planktonic organisms.

Copepod populations fluctuate with weather and ice cover, in turn making the whale highly dependent and vulnerable to climate change. Finley´s research has shown that copepod productivity and bowhead feeding correlate with global climatic oscillations, such as that caused by El Niño.

Bowheads are endangered. A hundred years ago, roughly 30,000 remained, but even then their numbers had diminished rapidly due to commercial whaling starting in the late 1700s. The populations left in the North Atlantic are in much more dire straits than those of the North Pacific.

Limited hunting still continues. As part of the Inuit´s comprehensive land claim settlement, native peoples have harvested two whales from the eastern population since 1995. They have the right to harvest one whale every two years.

Try as I might to wrap my brain around some of these facts, fear overcomes intellect as I watch the giant bodies swirl nearby. Only with encouragement from Finley do I fumble for my underwater camera housing and slip quietly into the chilly, 29-degree Fahrenheit water. My own dry suit seems hopelessly inadequate compared to the 2-foot-thick blubber that insulates my leviathan friends. 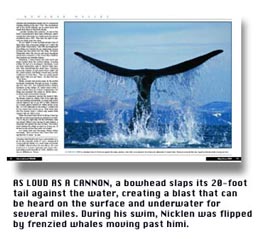 Hesitantly, I swim toward the swirl pools and spray created from the excited whales. Arriving within 30 feet of a bowhead´s blowhole, I put my head underwater, only to observe three massive tails undulating like giant fans. Common sense and feelings of self-preservation might call for a hasty retreat, but Finley´s words gave me the confidence to hold firm: "They are gentle giants and know that you are there," he had told me. "Trust them."

Shrills, squeaks and groans made by the excited bowheads reverberate through my body. A deafening bop, bop, bop, bop explodes from a whale´s blowhole on the surface. If I didn´t know better I would mistake them for sounds of aggression, but Finley has described this earlier as "flutter blows," in which males demonstrate bravado.

As I try to maneuver around the massive tails, the female cruises by within 4 feet of my right side, our eyes meeting momentarily. A young male in hot pursuit shadows her on my left. A third, followed by a fourth, glides beneath me within inches of my fins. As I bob helplessly on the surface, I realize four 60-ton whales have boxed me in. Their heads fade into the cloudy water­­which only means their massive tails are still to come.

When the closest tail is about to hit me, I tuck my legs into my chest and clench my snorkel in my teeth. I try to stay in a tight ball, but the turbulence spins me around. When I drop my legs to gain balance, a tail gently rubs against the back of them. The contact must surprise the whale as much as it does me: It freezes in mid-motion then sinks out of sight.

As I climb back into the kayak, Finley smiles knowingly. "Now you know why I have been coming here for 15 years," he says.

Canadian Paul Nicklen has been exploring the Arctic for the majority of his 31 years, having first moved with his family to a small Inuit community on Baffin Island when he was three.

He was trained as a marine biologist and began photographing professionally in 1994. Nicklen now lives in Whitehorse, Yukon.