Little Habitat on the Prairie

Only remnants remain of the nation's original prairie, and biologists are scrambling to understand and restore what is left 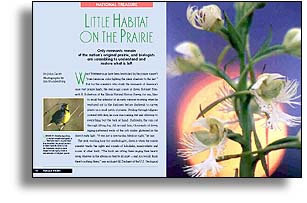 Walt Whitman may have been bewitched by the prairie sunset's "pure luminous color fighting the silent shadows to the last." But for the scientists who study the remnants of America's once vast prairie lands, the real magic comes at dawn. Botanist Kenneth R. Robertson of the Illinois Natural History Survey, for one, likes to recall the splendor of an early summer morning when he ventured out in the darkness before daybreak to survey plants on a small patch of prairie. Striding through tallgrass covered with dew, he soon was soaking wet and oblivious to everything but the task at hand. Suddenly, the sun cut through lifting fog. All around him, thousands of dewy, zigzag-patterned webs of the orb spider glistened in the dawn's early light. "It was just a spectacular, fabulous sight," he says.


The peak working hour for ornithologists, dawn is when the prairie scientist tracks the sights and sounds of bobolinks, meadowlarks and scores of other birds. "The birds are sitting there singing their hearts away, whereas in the afternoon they're all quiet--and you would think there's nothing there," says ecologist Jill Dechant of the U.S. Geological

Such wonders, however, are small solace for these scientists and others who study and value the habitat, as the prairie itself is in dire need of a metaphorical new dawn. Only remnants are left of the prairie's tallgrass that once carpeted the eastern side of the nation's heartland, the mixed grass that flourished through its midsection and the ribbon of shortgrass that spread before the Rockies. The tallgrass prairie has been hardest hit. Humans have plowed up or paved more than 99.8 percent of the rippling oceans of tallgrass that once covered vast areas from Canada south through the Dakotas to Oklahoma, and from Nebraska east into Indiana--in excess of 90 million acres. "People are still breaking native prairie--which is astounding," says prominent prairie ecologist G. David Tilman of the University of Minnesota.

The loss has been incalculable. "What a thousand acres of Silphiums looked like when they tickled the bellies of the buffalo is a question never again to be answered, and perhaps not even asked," conservation pioneer Aldo Leopold once lamented. Scientifically, the chance to understand the intact habitat--home to hundreds of species of plants, swept by periodic fires, grazed by vast herds of bison and elk and roamed by wolves and grizzlies--is lost. The prairie "is an ecosystem we barely know anything about," sighs Tilman.

But there is some hope. In the past few years, conservationists and scientists have protected new sites, such as a 37,000-acre prairie preserve in Oklahoma, an 11,000-acre preserve in Kansas and a 5,000-acre prairie on a former Army depot in Illinois. And years of painstaking experiments are not only starting to explain why prairies are so diverse but also to offer lessons for the conservation of forests and other habitats as well. "The renewed interest in the prairie has been really kind of incredible," says W. Dan Sverdarsky, wildlife biologist at the University of Minnesota at Crookston. 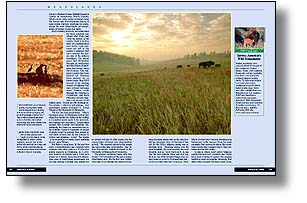 The prairie's problems began with John Deere's 1837 invention of the self-scouring, steel-bladed plow. For the first time, settlers were able to cut through the dense root systems of prairie plants such as the nine-foot-tall big bluestem. And cut through it they did. By the 1920s, tallgrass prairie was essentially gone. "Breaking prairie was the most beautiful, the most epochal, the most hopeful, and as I look back on it, in one way the most pathetic thing man ever did, for in it, one of the loveliest things ever created began to come to its predestined end," wrote novelist Herbert Quick in 1922. Much of what didn't become farmland was turned into cattle ranches. Even the small remnants that survived in places like cemeteries irrevocably changed due to their isolation and the lack of fire.

In places where most native tallgrass prairie has been lost, scientists and others have been working to restore the original habitat as much as possible. Ironically, that effort often requires the heavy hand of humans--first to replant the original vegetation where needed and then to keep it healthy, sometimes with a complex interplay of fire and grazing. Periodic fires bolster productivity and diversity while killing encroaching shrubs or trees that would otherwise turn prairie into woodland. But fire alone, particularly annual managed burns, can make the prairie less diverse and less productive. One limiting factor in the productivity of grasslands, for example, is the amount of nitrogen in the soil, and burns can make things worse by turning nitrogen in plants into nitrogen gas that is lost to the atmosphere.

The balance can be restored in part by carefully controlled grazing. In recent experiments at the National Science Foundation-funded Konza Prairie Long-Term Ecological Research Program in northeastern Kansas, researchers used fire to deplete the soil of nitrogen in sections of grassland. Then they brought in bison--and the big creatures made the prairie healthier. The degree to which grazing restored the ecosystem's diversity was a surprise for the scientists. They now think the chomping prevents tallgrasses such as big bluestem from hogging the soil nitrogen, thus allowing other species to grow. At the same time, the bison return nutrients to the soil through their manure.

Successfully managing native or restored prairie, therefore, can require a delicate hands-on juggling act. For example, on the 37,000-acre Tallgrass Prairie Preserve in Oklahoma, created in 1989 when the nonprofit Nature Conservancy bought a large ranch, managers have introduced a herd of bison and are periodically burning the land in an effort to reverse decades of damage. 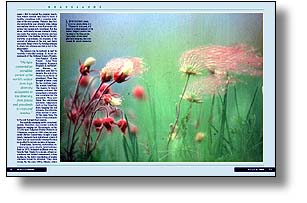 Sometimes, however, restoration requires even more drastic interventions. Back in 1973, biologists in Illinois were optimistic that, thanks to a decade of land acquisitions and habitat management, a long decline in the state's population of prairie chickens would be reversed. They were wrong. By the early 1990s, Illinois, which once held millions of the birds, was down to fewer than 50 birds.

The problem was inbreeding. "We found a decline in the fertility of the eggs and the success of the eggs," says Illinois Natural History Survey biologist Ronald L. Westemeier. So every year from 1992 to 1998, he and his team brought in about 100 prairie chickens from Minnesota, Kansas and Nebraska. "We've been able to upgrade the gene pool and get the numbers back up," says Westemeier. From a low of only five or six males in 1994, the population is now up to about 85 males.

Meanwhile, other research has been yielding new discoveries. Out at the Northern Prairie Wildlife Research Center, for instance, biologist Pamela J. Pietz decided to find out what was eating the eggs and offspring of grassland songbirds such as meadowlarks, bobolinks and grasshopper sparrows. "Silly me, I asked if we knew who the main predators of the songbirds were," she recalls. It had been assumed they probably were the same ones that go after prairie waterfowl, such as foxes, coyotes, skunks and raccoons. Pietz wasn't so sure. So she helped develop a tiny video camera to spy on nests hidden in the grass. After four years of observations involving 132 nests in North Dakota, Pietz found that the most common predator of eggs and nestlings there was the ground squirrel. Also high on the list were mice and cowbirds. And four times, the cameras caught white-tailed deer. "The deer come in during the night and munch the nestlings," says Pietz.

Some of the most important findings about the prairie are coming from University of Minnesota ecologist Tilman. "Our work is increasingly pointing to a trade-off between how well a plant can compete for what's there and how well it can reproduce," he explains. Big bluestem, for instance, has enormous, seven-foot-deep roots that are capable of extracting more of the limited nitrogen from the soil than their competitors. But that means bluestems invest 80 percent of their energy in their roots. "They have little left to put into seeds and are not good at reproducing and spreading," Tilman says. Bentgrass is at the other extreme. It puts only 30 percent of its effort into roots, but it makes a huge number of seeds. So when bluestem is hammered by grazers, bentgrass rushes to fill the gaps. 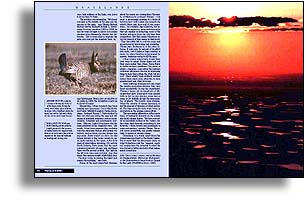 Other prairie plants have found their own ways to adapt. Some plants put out their seeds earlier than others. Some thrive in wetter or dryer conditions. One group of plants--legumes--has solved the problem of limited nitrogen in the soil by employing fungi to help them obtain the stuff, but at a cost. These plants' high nutrient content makes them much more attractive to deer, grasshoppers and other browsers.

These differing strategies not only make the prairie ecosystem diverse, they also boost productivity. In one key experiment, Tilman's teams set up hundreds of 96-square-foot plots. Some plots were planted with as few as one species; some had as many as 24. Initially all had the same number of plants. The results were striking. When the number of species increased, so did the amount of biomass, or plant material. The high diversity plots were twice as productive as the average monoculture.

This resounding affirmation of the importance of biological diversity on the prairie also holds a larger lesson. "We have converted an incredible portion of the world's surface from high diversity ecosystems to low diversity--from forests and grasslands to crops and ranches," explains Tilman. The result: lower productivity and greater vulnerability to disease or climate change.

Grassland is a world apart from the Amazonian rain forest or the frozen tundra. But it seems that the discoveries made on what Robertson calls the "magical, mystical" prairie have the potential to point the way toward a better dawn for other endangered ecosystems.


NWF Campaign: Saving America's Wild Grasslands
Native grasslands once covered about 40 percent of the contiguous United States. Today, only scattered fragments remain, including less than 1 percent of the original tallgrass prairie lands. To help protect these remnants and restore additional areas for black-tailed prairie dogs, bison and other wildlife that once flourished on U.S. prairies, NWF has launched a nationwide campaign: America's Wild Grasslands: Rediscovering and Restoring Forgotten Landscapes.