Mountains Under the Sea

Biologists, divers, photographers, fishermen and conservationists are all being drawn to the ocean's highest ground 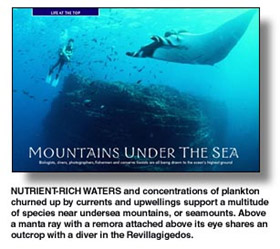 Like the tips of icebergs, the tropical Revillagigedos Islands only hint at what is lurking just beneath the sea. Tiny specks of land 360 miles south of the southern tip of Mexico´s Baja California, they are the visible peaks of an underwater mountain chain­­known as the Eastern Pacific Rise­­that stretches all the way to Antarctica, hidden just below the Pacific´s blue surface.

These seamounts, as the underwater landmasses are known, are havens for Pacific migratory fish and mammals - ­­including whale sharks, sailfish, blue marlin, dolphins, humpback whales, tuna and hammerhead sharks. Increasingly, as with other seamounts across the world, they have also become the hangouts for marine biologists, who are only just beginning to unravel many scientific secrets hidden in an unusual dynamic of seas and currents. At the same time, seamounts have drawn the attention of divers, photographers, conservationists­­and commercial fishermen ­­all with some vested interest in protecting or using the unique animal communities in these fragile environments.

By most definitions, a seamount is any underwater prominence with a summit that rises more than 3,000 feet above the seafloor but does not break the surface of the water. (The photos accompanying this article were taken on seamounts, smaller undersea pinnacles or associated islands that just crack the surface.) They are found in the Atlantic and Indian Oceans but are most numerous in the Pacific due to its active volcanic fields. Most are formed by volcanoes that never reached the ocean surface. Or they reached the surface but were eroded back down. Or the seafloor they rested upon could not support their weight, so they slowly drowned. "Since the average depth of the ocean is 13,000 feet," says Loren Haury, a research oceanographer at the Scripps Institution of Oceanography in California, "the mass of any seamount that approaches the surface has to be enormous."

Life around seamounts is usually richer than in the surrounding waters because ocean currents must speed up to get around seamounts and this creates upwellings that churn up nutrients from below the lighted zone­­ - including nitrates and phosphates, which enhance the growth of plant life. Currents passing around the tops of seamounts also create eddies and other vortices that can catch, hold and concentrate small plants and animals­­phytoplankton and zooplankton­­in suspension near summits. The nutrient-­rich waters and the concentrations of plankton, in turn, create the basis of a food chain.

But currents must be just right for these optimal conditions, and when they are not, an undersea mountain can be a virtual desert. "You can have a seamount that is very fertile, but then ocean climate and currents can change and the animals on the seamount may miss reproducing for one to five years," says George Boehlert, a biologist with the Pacific Fisheries Environmental Laboratory of the U.S. National Marine Fisheries Service. "That´s one reason seamounts are so fragile," Boehlert continues.

The seamounts near the Revillagigedos typify the biotic magnificence of these underwater communities and are a draw for divers. For many who come here, the main attraction is giant manta rays, as unearthly as they are docile. These huge, flat-bodied fish, which seem to fly through the depths, can measure up to 20 feet from wingtip to wingtip. Divers who once rode their backs (the practice is now discouraged because it breaks the antibacterial mucous coating on the manta rays´ skin) attest to the skill and grace with which rays dance through the water but also the power that ripples through their formidable muscles. 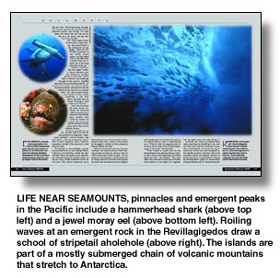 The mantas here also illustrate the kinds of discoveries waiting to be made by biologists. One recent finding by Robert Rubin, professor of biology at Santa Rosa Community College in California: Though the big fish are drawn here to feed on rich plankton blooms, they also come to visit clarion angelfish. As the rays hover over the seamounts, the diminutive angelfish come up and feed on the parasites that attach to the rays´ skin. "They´ll even allow the clarions to enter their mouths and pick off the parasites inside," says Rubin. "In some places the manta rays will line up just like at a car wash, waiting their turn to be cleaned."

Still, surprisingly little is known about seamounts. Says Ron Kaufmann of the University of San Diego, "There are over 30,000 seamounts in the Pacific Ocean alone, yet only about 100 to 150 have been studied. They are indeed one of the deep mysteries of the sea."

What is known is that the craggy surfaces of these structures provide havens to resident predators and other species there to harvest the cornucopia brought by the currents. Shellfish and other bottom­ dwelling animals, for instance, are fed by the nutrient fallout from above and by currents from the side "which deliver food like a conveyor belt," says the Scripps Institution´s Haury. In turn, smaller organisms in the food chain´s pyramid become dinner for larger, more sophisticated feeders.

Even the air above the water draws life. Haury has observed seabirds gathering at seamounts even though their summits were 1,600 feet below the surface. The increase in marine life may actually create odors that attract the birds, he says.

Resident populations are not the only reason for the marine profusion on seamounts. Open­ ocean travelers ­­such as whales, tuna and sharks­­ visit the underwater mountains on their migratory routes. However, researchers wonder if the attraction is more than just food.

To help find out, Peter Klimley, a marine animal behaviorist at the Bodega Marine Laboratory in California, studied the hammerhead sharks that gather at an underwater mountain known as Espiritu Santo off the east coast of Baja California in the Sea of Cortez. The scientist had never seen a hammerhead eat a fish around Espiritu Santo in more than 15 years of observation. So he tagged a number of these animals to find out where they dine.

What he discovered was that the hammerheads use Espiritu Santo as their breeding grounds during the day but travel to other seamounts to feed at night. He was amazed at the directness of their travel even in strong currents. On further investigation, he found that the seamounts were magnetically charged, and he wondered if cracks in the seafloor acted as tracks to other feeding spots. When he laid the magnetic grid of the area over a map of the known movements of the sharks, they matched.

"What I began to suspect was that the hammerheads came here not because Espiritu Santo was so rich but because the whole region was rich," says Klimley. "They then utilize the seamount as a hub and the cracks in the seafloor as the spokes of a magnetic map that helps them mine that richness."

Ironically, the schools of hammerhead sharks near Baja are dwindling in size, and that illustrates another seamount issue: their vulnerability to human intrusion. Seamounts, which were only recognized as rich marine resources in the last half of the twentieth century, are uniquely sensitive to fishing pressures. Conservationists blame the hammerhead´s plight on uncontrolled fishing in Mexico and the Asian demand for shark fins. 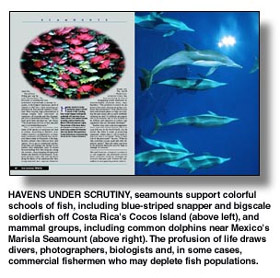 The toll from fishing goes way beyond hammerheads. The discovery of commercial concentrations of armorhead, a delicacy to Asians, in the Emperor Seamounts north of Hawaii in 1967 led to their immediate exploitation by Russian and Japanese fishermen. More recently, large concentrations of orange roughy were uncovered on seamounts off Australia and New Zealand, and just as immediately decimated. "The first boats get in there and clean up," says Haury. "The second boats don´t do so well, and after that it´s all diminishing returns."

This is particularly worrisome since many of the species on seamounts are new to science. According to Boehlert, Australian scientists on expeditions to deep­water seamounts off Tasmania have discovered that as many as 40 percent of the large, benthic animals they collected were new species. Yet to get at commercial catches, fishermen can damage the habitat in unknown, often unintended, ways. To obtain bottom­feeding fish, they drag nets along the summits, often damaging the high­ relief habitat that benefits fish production. To acquire precious corals, they pull big blocks along the flanks of the seamount and then, using attached nets, capture whatever breaks off.

The IUCN­­World Conservation Union has been promoting the idea of designating certain seamounts as internationally protected areas. Says Boehlert, "The problem is even if we do protect these areas, how are we going to enforce those protections? How often do you have enforcement planes or ships out cruising the open ocean, able to catch somebody violating the law? It´s difficult and expensive to do research, and it´s just as likely to be difficult and expensive to enforce any regulations that are ultimately developed."

Boehlert does take some encouragement from successful United Nations efforts to stop drift nets in the North Pacific, but he knows that when it comes to protecting seamounts, where there is still so much to find out, time is an enemy. "What is their role in the open ocean?" he asks. "What do they contribute to tuna, squid and other migratory species? There are many questions to be answered before we can ever hope to manage the resource." Michael Tennesen, a frequent contributor to this magazine, has previously written about seamount predators, including the northern elephant seal. Norbert Wu specializes in photographing marine subjects.

Michael Tennesen, a frequent contributor to this magazine, has previously written about seamount predators, including the northern elephant seal.