In the Channel Islands off California, a powerful winged predator is causing big trouble for a little fox 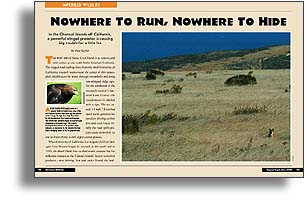 THE WEST END of Santa Cruz Island is as remote and wild a place as one could find in Southern California. The rugged road leading there from the small University of California research station near the center of this unpeopled, 66,000-acre isle winds through streambeds and along rain-whipped ridge tops. On the dashboard of the research station's battered Land Cruiser, the speedometer is labeled with a sign: "Do not exceed 15 mph." Even that speed seems generous for travelers driving on this dirt-and-rock track. Finally the road spills precipitously downhill to end at Fraser Point, a cliff-edged coastal plateau.


When University of California, Los Angeles (UCLA) biologist Gary Roemer began his research at this road's end in 1993, the dwarf island fox--a charismatic creature that for millennia reigned as the Channel Islands' largest terrestrial predator--was thriving. Scat and tracks littered the landscape, and even in daylight the foxes patrolled their territories for food. Often, Roemer found himself visited by the inquisitive animals, which had evolved on the island without fear of humans or any other predators. At night, their yips and barks pierced the darkness.

Roemer set out to document the social organization, mating system and foraging ecology of the island fox, a flagship species of Channel Islands National Park, which was established in 1980 to protect five of the eight islands in the archipelago. Before long, however, he discovered that the animals he was studying were disappearing at an alarming rate. By 1998, the foxes' tracks and distinctive calls had vanished from Fraser Point. The whole of Santa Cruz, home to more than 1,300 foxes just four years previously, now sheltered fewer than one-fifth that number. And Santa Cruz, it turned out, was not the only island where the animals were disappearing.

The dramatic decline of such a visible, well-studied species symbolizes the tenuous nature of survival for much of America's wildlife, even those creatures that live in isolated and seemingly pristine areas of the country. "The island fox is California's only endemic canine," says UCLA biologist Robert Wayne. "And now it's the most endangered vertebrate in the state." It is also among the most endangered of the half-dozen fox species inhabiting the United States.

The entire geographic range of the island fox consists of the six largest Channel Islands. Each is populated by a different subspecies that is distinguished by variations in length of their tails, shape of their muzzles, fur color and other attributes. Four subspecies of the island fox--those living on the northern islands of Santa Cruz, San Miguel and Santa Rosa, along with Santa Catalina to the south--have suffered sudden catastrophic population crashes within the past six years, plunging in numbers by an estimated 90 percent. Foxes on the other two islands--San Nicolas and San Clemente--so far appear to be holding steady, leaving the entire species reduced to no more than 1,300 individuals, according to Tim Coonan, a wildlife biologist at the national park.

The story of the island fox began nearly 20,000 years ago, when sea levels dropped considerably, narrowing the channel between the northern Channel Islands (at the time, joined together as one by land bridges) and the mainland. The reduced span permitted a small number of gray foxes to reach the islands. Over time, descendants of these pioneers evolved into a distinct species, isolated from their mainland relatives as sea levels again rose.

Almost 10,000 years passed before the first Native Americans ventured to the northern Channel Islands. Though these Chumash people occasionally harvested pelts for clothing, they did not rely on the island fox for food. Instead, the Indians kept them as pets and incorporated them into religion and legend. Native people apparently introduced the island fox to the widely separated southern Channel Islands and, in time, populations of all six subspecies flourished.

Slightly larger than a housecat, the three- to six-pound island fox is roughly half the size of the mainland gray fox. Its diet ranges from insects and mice and other small vertebrates to crabs and wild-growing fruits. Island foxes live as long as ten years and generally mate for life.

Following the winter breeding season, females give birth to litters of two to five pups in early April. Males then shoulder the duty of supplying food to mother and offspring. By early summer, pups emerge from their dens to begin foraging alongside their parents. Come winter, they head off for life on their own. Nimble tree climbers, island foxes can survive in all types of island habitat.

After nine months of studying foxes on the western end of Santa Cruz, Roemer documented his first mortality in April 1994. "All of the animals seemed healthy and were doing just fine," he recalls.

If the death came as a surprise, so too did the apparent perpetrator: a golden eagle. Then the deaths came more rapidly. "Over the next 17 months, I found 21 fox carcasses among my focal animals," says Roemer. "Of those, 19 appeared to be the result of golden eagle predation."

A newcomer to the archipelago, the golden eagle historically had been deterred by the territorial behavior of native bald eagles, which preyed upon fish, marine mammals and seabirds in the Channel Islands while generally leaving the foxes alone. Beginning in the 1950s, however, the effects of DDT began to take a toll on the islands' bald eagles, and eventually the birds disappeared from the area altogether. That left an opening for golden eagles, which were lured to Santa Cruz by the island's numerous feral pigs, originally introduced there for hunting.

Could the Santa Cruz subspecies of fox survive under this unprecedented aerial assault? Roemer notified the National Park Service of his findings.

At about the same time, Channel Islands National Park biologists had started monitoring foxes on neighboring San Miguel Island. From 1993 to 1994, their data showed San Miguel's total population of the animals was increasing. But the following year, something odd happened: The number of foxes at one study site tumbled from 54 to 21. In 1997, the number at that site dropped all the way to zero, and by last winter, only 15 foxes survived on the entire island.

From the beginning, park biologists shied away from the notion of golden eagles as the culprits on San Miguel. "We had recorded very few sightings of golden eagles on San Miguel," recalls Coonan. "Instead, we suspected disease. It very much seemed like that, being a rapid decline that seemed to proceed from west to east on the island."

In the autumn of 1998, park service biologists outfitted more than a dozen San Miguel foxes with radio collars in order to directly track their fates. "It was shocking. Within a couple of weeks, several of the animals died from golden eagle predation," says Coonan. "And over the first four months of the study, half of our animals were killed by golden eagles."

Four years after Roemer first fingered the golden eagle as the foremost threat, park biologists had corroborated the hypothesis and the park gained the information it needed to try to solve the decline of its signature species. Roemer suspects that urbanization of the California mainland might have contributed to the island foxes' plight by forcing golden eagles to seek new territory.

Meanwhile, sheep and other nonnative herbivores, which were introduced onto the islands along with agriculture before the national park was established, had shifted the landscape from protective woodlands to open grasslands--areas that offer foxes little shelter from aerial predators.

"In the park, we found ourselves faced with the imminent extirpation of three fox subspecies," says Coonan. Park authorities convened an ad hoc island fox recovery team in April 1999 that recommended several emergency actions: First, bring the wild foxes of San Miguel and Santa Rosa, where fox numbers are lowest, into enclosed sanctuaries to shield them from predation. Second, employ the sanctuaries for captive breeding to rebuild the populations. Third, transfer golden eagles to the mainland (preferably east of the Rocky Mountains), track them with satellite transmitters and hope that they don't find their way back. Fourth, reintroduce bald eagles to the islands to help deter future golden eagle resettlement. Fifth, remove the feral pigs, which continue to attract golden eagles.

Since then, several elements of the plan have been implemented, but adequate funding for the full effort remains a problem. And recently, biologists discovered that the fox population on a fourth island, Santa Catalina, has declined by some 80 percent during the past year, apparently ravaged by distemper.

The future of the island fox, to say the least, remains uncertain. National Park Service biologists have requested that the species be listed under the federal Endangered Species Act--a decision that is still pending.

Meanwhile, when fellow researcher Brian Latta and Roemer, now a member of the island fox recovery team, clambered into a golden eagle nest on Santa Cruz Island for the first time last autumn, they discovered a telling collection of artifacts: Beside a jumbled assortment of western gull, common raven, Brandt's cormorant and feral piglet skeletons rested two jawbones and the tibias of island foxes. "It was," says Roemer, "a moment I won't soon forget."