Return of the Bone Eaters

Biologists are helping the bearded vulture come back to old haunts 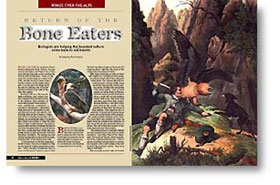 From a valley in northern Italy´s Stelvio National Park, Fulvio Genero peered through a spotting scope at the snow-frosted dolomite peaks marking the border with Switzerland. There, at the edge of a crevice high on a sheer rock wall, sat the result of more than a decade of labor for the Italian biologist: a downy gray hatchling about the size of a chicken, one of the first bearded vultures born wild in the Alps this century.


Bearded vultures, the largest birds in Europe, once soared over the continent from western Spain to the Balkans. But centuries of persecution against these raptors - once mistakenly considered a scourge to shepherds - eliminated them from all of their habitat in western Europe except for about 100 breeding pairs in the Pyrenees, Corsica and Greece. Starting in the late 1970s, though, an international team of biologists like Genero has worked to bring the birds back to their Alpine homes. The reintroduction effort involves breeding the birds in captivity, releasing them at several sites in the Alps, monitoring their status and educating people to help restore the creature´s tarnished reputation. The strategy has just started bearing fruit in the past three years, with the birth of five chicks in the wild.

"It was fantastic to see the young bird," recalls Genero, who is a coordinator in Italy for the bearded vulture reintroduction project. "After you have worked for over 10 years on this project and you can see that the birds are able to breed on their own, it´s really exciting. I felt like the work of the whole team was being rewarded."

With wings stretching as wide as 9 feet and weights of 15 pounds or more, bearded vultures dwarf all of the continent’s other birds. The vultures fly with exceptional grace, diving swiftly along mountain canyons and, during mating season, twisting and pirouetting with great agility. One of four species of vulture found in Europe, bearded vultures earned their name from a small tuft of dark feathers below their beaks. But what truly sets them apart from their carrion-feeding relatives - and from every other bird in the world - is the mainstay of their diet: the bones of dead animals. Their digestive tract is adapted to break down fairly large bones such as the femur of the chamois, the small, goat like antelope of the Alps. The birds have also learned to break up larger bones by carrying them hundreds of feet up in the air and dropping them on stones. The rest of their diet consists of tendons, ligaments and other carrion.

"The preferred food of bearded vultures are the remains from the prey of other predators," says Hans Frey of the Veterinary University of Vienna, chief coordinator of the reintroduction project. "After a group of griffon vultures leaves a carcass, for example, what is left behind is the best food for the bearded vulture. They have only to wait there."

The seemingly macabre diet of bearded vultures and their imposing physical features (including a menacing-looking "eyebrow" of dark feathers above each eye) spawned European fables about the birds being vicious predators that killed domestic sheep, wild game - and even young children. Spurred by those myths and by bounties paid for the birds, residents of the Alps used guns, traps and poisoned baits to slay the vultures. The creatures also declined because they fed on the poisoned carcasses of other feared predators such as wolves and lynx. And many were killed to provide specimens for private or museum collections. The last bearded vulture in the Alps was shot in the Val d´Aosta province of Italy in 1913. "It is quite clear that the extinction of the bearded vulture was a consequence of human persecution," Frey says.

The bird is still often called by its traditional name, "lammergeier," a German word that translates to "lamb vulture." But in recent years, biologists have shunned that name, feeling that it helps to perpetuate the myths that brought about the species´ decline in Europe. Experts point out that the frightening legends about the birds are false: Bearded vultures virtually never kill prey except for turtles (which they drop from the air, as they do with bones, to break open) or if they find another animal near death.

Although bearded vultures were nearly eliminated from Europe and northern Africa, they continued to inhabit their range in Asia in good numbers. (A subspecies of the bearded vulture is also found in eastern and southern Africa.) Many were also kept on display in zoos throughout Europe. So there were still plenty of bearded vultures to be found when the first attempt to reestablish the birds in the Alps was launched in the early 1970s. This early effort failed, however, because some of the birds, brought in from the former Soviet Union and Afghanistan, died during handling and others escaped from their cages.

Later in the decade, another group of European scientists and conservationists started the current project to reintroduce the birds to the entire expanse of the Alps, across Austria, Switzerland, Italy and France. The effort has been aided by the Frankfurt Zoological Society, the World Wide Fund for Nature (WWF)-Austria and  The World Conservation Union (IUCN). Using birds from 28 zoos throughout Europe, as well as the former Soviet Union, Israel and the United States, the group set up a breeding center in Vienna to provide young bearded vultures for the project.

In the mid-1980s, biologists began annually releasing captive-bred birds at four sites in the Alps. The sites are natural bearded vulture habitat: high, rocky cliffs where the birds nest and roost, above open valleys populated with wild grazing animals such as chamois, red deer or ibexes. In the summer, the wild mammals are joined by flocks of domestic sheep and goats left to graze in the meadows. Some of these animals die from disease or old age, others perish in avalanches or from cold weather, providing food for scavengers.

Before the 3-month-old captive vultures are released, their wing feathers are bleached in distinctive patterns so they can be identified later. Then, they are driven to the sites, where park rangers or other field staff climbs steep cliffs to caves or rock crevices, carrying the young birds on their backs in cases attached to pack frames. Altogether, 88 young bearded vultures have been released since the project began. About 60 are still alive. 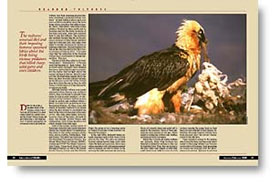 Team members return to the release sites to feed the birds, but they avoid direct contact so the young vultures won´t become comfortable with humans. Such imprinting on people can seriously hurt the birds´ chances of survival. "We have to put food in the caves every third or fourth day," says Richard Zink, a biologist and project coordinator who monitors bearded vultures in Austria and Germany. "The birds eat meat when they´re young, so we feed them rabbits and parts of lambs. When they grow older, they become very specialized on bones." As soon as the juveniles are able to fly and find food on their own - usually in three to six weeks - the feeding is halted.

After their release, the vultures are monitored by biologists and a network of observers across the Alps. In addition, the project leaders ask hunters, hikers and others to fill out and send in printed cards with data about the birds. That information is then entered into the project´s central data base in France. More than 11,000 observations from more than 2,000 people have been logged. "There are a lot of mountains, and it´s difficult to locate the birds," Zink says. "We´ve tried to build up a network of ornithologists, hunters, all interested people, and we try to get as much information as possible from them."

Although many citizens have taken a keen interest in the bearded vulture´s recovery, old prejudices about the bird die hard. So project staffers are trying to educate people in the Alps about the vultures, stressing that not only are the birds harmless, but they perform an important ecological role. Like other carrion feeders, bearded vultures help to eliminate carcasses - and in doing so, prevent the spread of disease. "A lot of public relations had to be done so that the public accepted these animals," Zink says.

Despite these efforts, some of the reintroduced birds have been killed by Alps residents. In addition to the slaying of one bird in Switzerland, for which a man was arrested, there have been two other known cases of poaching of released bearded vultures, one in France and another in Italy near the Austrian border. Some of the birds have also died from crashing into power lines and in avalanches. The fate of some other bearded vultures that have disappeared is unknown.

Another challenge to the reintroduction project is the bird´s reproductive biology. It took until 1997 for the first chicks to appear because the vultures do not begin to reproduce until they reach at least five years of age, and often not until they are eight years old. Then, breeding pairs only produce one young bird per year.

An additional difficulty for this international program has been lack of funding. Frey estimates that it costs about $19,000 for each bird that is released. The Frankfurt Zoological Society and other organizations have guaranteed the funds used for breeding the vultures, but the costs of monitoring the released birds are increasing and the project has had difficulty finding sponsorship for that work. Virtually all of the monitoring is now being done by volunteers. To raise more money, project organizers in Switzerland created a program in which a person or group can name one of the vultures in return for a contribution of 20,000 Swiss Francs - roughly U.S. $13,350. Last year, two Swiss groups - a cooks´ guild and a hunters´ organization - each donated that amount.

The appearance of bearded vulture chicks in the wild the past three years has prompted some of the reintroduction team to term the project successful, but Frey calls that assessment premature. "It takes a long time before you can judge that," he says. "It will take 10 more years, or 20 more years perhaps, before we can really judge whether the project is a success."

With the recent progress of the public-education program, however, the bird’s future in the Alps is starting to look more secure. Frey may not be willing to declare victory, but he says, "I´m optimistic."