After years of prospering, California's sea otters are declining, and researchers are attempting to find out why 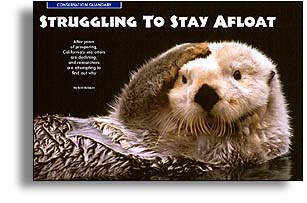 In the calm water of a kelp bed off California's rugged Big Sur coast, a sea otter floats quietly on her back, her young pup on her belly. A moment later, the mother rolls over, dumping the pup into the frigid water. Both swim a few yards, then float on their backs once again.


High above on the coastal bluffs, biologist Mike Kenner peers intently down through his binoculars. As violet-green swallows and white-throated swifts dart about him in the spring sunshine, he watches the pup, then scans the kelp bed for other otters. Checking with his colleague Jud Vandevere, Kenner marks down his total: four otter females with pups, plus three solitary adults.

This breathtaking vantage point near Torre Canyon is just one of dozens the two men will visit today in their effort to tally every sea otter on this stretch of coastline. Farther north and south, other researchers are doing the same as part of a twice-yearly otter count that has been going on since 1983. When all the numbers are in, the 1999 spring count tells a worrisome tale--for the fourth year in a row, southern sea otter numbers have gone down. Scientists have been unable to pinpoint the cause: Starvation, disease, pollution, drowning in fishing gear and even El Niño's storms may all play roles, but none by itself seems enough to explain the problem.

"This decline is real, it is significant, and we do not have a simple understanding of why," says Dave Jessup, a senior wildlife veterinarian with the California Department of Fish and Game.

It's ironic that the otters should have come to this point, because until a few years ago they stood as one of the success stories of marine conservation. By the early twentieth century, commercial hunters had almost wiped out the animals in pursuit of their dense pelts. Vandevere, a free-lance naturalist based in Monterey, California, who volunteers his time for the annual otter surveys, recalls being taught in the 1950s that the southern sea otter was extinct. But in fact, a few dozen did survive in isolated pockets along the California coast. (The northern subspecies in Canada, Alaska and Russia never veered so close to the brink.) And after otter hunting was banned in the early twentieth century, the population crept slowly upward again, though the creatures' numbers were still considered perilously small.

Southern sea otters were listed as threatened under the Endangered Species Act in 1977, and once gill-net fisheries--which can entangle and drown the otters--were banned in shallow inshore waters in the early 1980s, their numbers boomed. (Northern sea otter numbers were never considered small enough to warrant federal listing.) By the mid-1990s, California's sea otters were doing so well that government biologists began to talk about when they ought to remove them from the threatened species list.

"It wasn't too long ago they were talking about what the number was where they were going to delist them, but things have turned kinda sour since then," says Kenner, a biologist at the University of California-Santa Cruz who has been studying otters for 15 years.

From a peak of nearly 2,400 animals in 1995, the southern sea otter count has slid steadily downward year by year--in normal years as well as the stormier El Niño years--until today there are barely 2,000 otters left. A bigger concern is that dead animals have been washing up on shore in unprecedented numbers--more than 200 animals in 1998 alone.

"We picked up 10 percent of the population dead in 1998. That's not something that happens very often in a wildlife population," says Jessup.

Many of the dead southern otters looked like they were starving, which led some experts to wonder whether the animals were running out of the sea urchins, crustaceans and other bottom-dwelling creatures that form the bulk of their diet. The idea makes sense: Otters are ravenous eaters, gulping down as much as a quarter of their body weight every day. Visitors to the central California coast can often see--and hear--a nearby otter floating at the surface, cracking hard-shelled prey by pounding them on an "anvil" rock balanced on its chest.

Underwater, the otters are curious and insistent explorers as they poke around the ocean floor in coastal areas and grab things with their agile hands. Keepers at the Monterey Bay Aquarium learned this to their chagrin a few years ago when the four otters on exhibit there turned everything in their tank that wasn't bolted down--and even a few things that were--into toys. But when mealtime comes, each otter in the wild seems to return to its own two or three favorite foods out of the dozens that are available. One otter that lives near the aquarium eats mostly sea urchins and mussels. Another prefers fat innkeeper worms it digs from the mud. A third dines on octopuses, while a fourth specializes in crabs and sea stars.

These dietary habits seem to run in the family, because researchers commonly find the same quirky tastes in both mother and pups. By specializing in a few favorite foods, each otter may become expert in the tricks of finding and opening those items. But sometimes, an otter's food choices leave biologists baffled. One otter makes a habit of dining on turban snails, a labor-intensive diet for such a big eater. "You wonder why an adult otter would choose to eat a couple thousand little turban snails instead of a couple of big crabs," says Andrew Johnson, who manages the aquarium's otter research and conservation program.

The otters' gargantuan appetites are absolutely essential because, unlike other marine mammals, they have no blubber layer to insulate their bodies from the cold ocean. Instead, they depend on a layer of air trapped within their thick fur--with as many as one million hairs per square inch, the densest pelt of any mammal. The otters' frequent grooming keeps plenty of air bubbles trapped between the hair shafts, insulating them from the frigid world outside. "If their fur degrades and that cold water gets in next to their skin, they become just like you or me--we wouldn't last too long," says Johnson. "It's really important to their survival to maintain their fur in good condition." (This makes sea otters among the most vulnerable marine animals to oil spills, which slick down their fur and destroy its insulating properties.)

Even the many hours that otters spend simply floating each day may be crucial for conserving energy. Almost always, the animals float on their backs, with their paws--the one part of the body with very little insulating fur--high and dry. "People see otters lounging around and bobbing and they say, 'Oh, how cute.' But pretty much everything they do is related to survival," says Johnson. "It's not as joyous an existence as people think it is. These animals are really on the edge."

Despite their enormous appetites, though, Kenner says it's not clear that otters are dying of hunger. There is little evidence that the otters' prey species have dwindled in recent years, and there are few signs that hungry otters are migrating up and down the coast in search of better food. Moreover, the wrong animals seem to be dying. "If it was just a food limitation, you'd expect to see the very young and very old dying, but we see a lot of prime-aged animals," says Kenner.

The starving animals may be the result, not the cause, of the problem, some scientists think. "It doesn't take too many days of being too sick to eat to get real skinny real fast," says Jessup. And indeed, when pathologists examined the recently dead animals, the biggest killer turned out to be disease, which accounted for 40 percent of all deaths. About half of the diseased animals were felled by parasites, especially a spiny-headed worm that normally passes from sand crabs into seabirds. If hunger drove more otters to eat sand crabs in recent years, Jessup figures, they may have picked up the parasite in greater numbers than before.

The other half of the diseased animals fell victim to an odd variety of problems: massive bacterial infections, a protozoan called Toxoplasma that infects the brain, and even the fungus that causes valley fever, a respiratory disease that affects humans in the Southwest. All three disease organisms are common, yet rarely cause problems in healthy animals. Instead, they tend to pop up when something weakens the immune system. "These three syndromes together suggest there may be something wrong with the immune system of sea otters," says Jessup.

If so, one culprit might be pollutants--especially tributyltin, the active ingredient in the paints that boat owners use to keep their hulls clear of barnacles and algae, and chemicals such as PCBs or DDT residues. Sure enough, Kurunthachalam Kannan, a toxicologist at Michigan State University, found higher levels of tributyltin in tissue samples taken from diseased otters than in samples taken from otters that died of other causes. However, these contaminants seem unlikely to be the whole story--most tributyltin contamination occurs near harbors, and dead otters have been common even on relatively unspoiled coastline.

Fishing, too, may bear part of the blame for otter deaths. In the past few years, many fishermen have begun setting traps for rockfish and other bottom-dwelling fish along the California coast. These traps--large mesh cylinders with a small opening that's easy to get into but hard to get out of--might catch and drown curious otters attracted by the fish inside them, biologists think. The trap fishery is so new--and so unregulated--that fisheries biologists don't even know how many traps are in use, let alone how often otters get caught in them. To see whether curiosity is killing sea otters in the wild, the California Department of Fish and Game is sending observers out to watch fishermen pull up their traps.

Despite all these possible explanations for the sea otters' recent decline, conservationists are still stumped by what's going on and unsure what steps they can take to reverse the problem. Otters might, for example, be succumbing to disease because their immune systems have been weakened by toxics in urban sewage, agricultural runoff or boat paints. But even if that's true--and it's still a big if--scientists may have to wait until they have better evidence before they call for expensive changes in water treatment or land use.

Most worrisome of all is the possibility that there may never be a single smoking gun. "My sense is that it's a lot of little things ganging up," says Johnson. "There are enough stresses on this population that if any of them increase slightly or there are any other pressures put on the population, we're going to see a decline."

If the otters are being nickeled and dimed toward extinction, conservationists will be hard-pressed to find a quick fix for the problem. But a nickel-and-dime solution--fewer fish traps here, slightly cleaner water there, a better year for the species they eat--might be enough to help the species turn the corner back toward prosperity. And on a coastline with many competing political interests, such a solution might be the most practical one of all.