Though Harmless to People, the Tarantula Inspires Both Passion and Terror

Entering the secret world of the tarantula 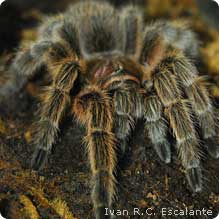 TOM PRENTICE IS CROUCHING by a burrow in the desert hills above Lake Skinner in Southern California. The opening, less than an inch across, is ringed by fresh dirt. Who could suspect what creature lives inside?

Prentice uses a long blade of grass to tap, scratch and probe the mouth of the burrow, mimicking an insect´s footsteps. A minute passes. Then another. Suddenly, hairy appendages emerge as a large tarantula—boasting a leg span of some five inches--charges forth. The enormous arachnid intends to ambush a hapless victim, inject deadly venom with its fangs, add digestive juices and slurp the liquified remains. But this time, finding no prey, the spider instead scuttles harmlessly into Prentice´s hand.

This female, now crawling up Prentice´s arm, belongs to one of the dozens of tarantula species found west of the Mississippi River along the southern tier of the United States and as far north as Salt Lake City, Utah. Astoundingly versatile, they thrive in deserts, forests and snow-covered mountains. Though tarantulas are relatively common and notorious creatures, scientists know surprisingly little about their biology, in part because of these spiders´ nocturnal and subterranean habits. Even the most fundamental information, such as the number of species and differences between them, remains unknown.

"Tarantulas of the United States have been ignored by hobbyists because they make less pretty pets than tarantulas from other countries," says Prentice, "and specialists have avoided studying them because they´re so difficult to work with."

An entomologist at the University of California-Riverside, Prentice is one of a small group of scientists presently studying tarantula behavior, taxonomy and ecology in order to better understand these much-maligned creatures. In particular, Prentice´s goal is to classify all American tarantulas by species, a daunting task that could well absorb his time for the rest of his life.

"Just to describe the species of the Mojave Desert took me eight years," he says. "I´m passionate about tarantulas."

For many people, tarantulas inspire not passion but outright terror. Our fears have been reinforced by fiction, such as the 1955 film Tarantula, in which a 100-foot-tall hairy spider rampages through an Arizona town until an air force pilot, played by Clint Eastwood, mounts a defense with napalm. But our fears are also misguided. Like all spiders, tarantulas do possess venom. Yet these giant arachnids are rarely aggressive toward humans, and their poison apparently is only potent enough to harm small prey.

"I once let an agitated tarantula from the Mojave Desert bite my hand because I was curious about the effect," Prentice recounts. "It plunged its fangs all the way into my finger for quite a while and likely released most of its venom, but I experienced no reaction aside from minor swelling. It was similar to being pricked by a pin, only less painful."

Indeed, the tarantula´s first line of defense lies not in its fangs but in its barbed hairs, which can be rubbed off in clouds to irritate an attacker´s skin and eyes. Prentice and other scientists are now discovering that the rest of the tarantula´s life is equally remarkable.

For their first few years of life, immature males and females seldom stray more than inches from their burrows, dashing above ground to capture prey. "A tarantula will attack literally anything that it can subdue: beetles, grasshoppers, locusts, other spiders, small lizards and mice," says Fred Punzo, a University of Tampa biologist who studies tarantulas across the Southwest. "I´ve even seen one attack a young rattlesnake."

In turn, tarantulas risk falling prey to a gigantic wasp, some two inches long, aptly known as the tarantula hawk. This formidable insect can permanently paralyze a tarantula with its stinger and lay a single egg inside the still-living body. On hatching, the wasp larva devours the immobilized host, reserving the vital heart and nervous system for last.

Even after successfully reaching maturity, female tarantulas maintain their homebody life style, surviving as long as 30 years. For males, however, sexual maturity at between 7 and 10 years of age spurs a dramatic behavioral transformation. Fated to die within months, males must abandon their home burrows to begin roaming the landscape in search of mates.

To locate a sexual partner in the vast desert is an impressive feat, given the reclusive nature of the females, the danger of desiccation in the hot sun and the risk of being picked off by a predator, such as a roadrunner. Using specialized sensory organs, males apparently can detect the chemical cues from silk laid by females on the ground near their burrows. Prentice also speculates that tarantulas communicate over longer distances by producing intense stridulations that travel through the soil. Even so, some males might well travel several miles during this nomadic search phase.

"They´re constantly on the move throughout this whole time, except during the heat of the day, when they might find shelter under a shrub, on a tree trunk or underground," says Cara Shillington, a graduate student at the University of Oklahoma who tracks Texas tarantulas by using radio tags.

Where tarantulas are abundant, these perambulations can create an arachnophobe´s worst nightmare. "I´ve seen areas where the ground seems to be crawling with hundreds of tarantulas," says Punzo. "You can´t drive along the road without running over quite a few of them."

One August night, a brilliant quarter moon hovers in the sky. Prentice observes a male tarantula as it encounters silk near the burrow of a female. For several moments, the male crouches completely motionless, seemingly contemplating his next action. The stakes are high: The rendezvous can quickly turn fatal if the female finds the male more appealing as a meal than as a mate. Even after successfully mating, a female may occasionally kill the father of her offspring; he is an excellent, readily available source of protein to fuel development of the next generation.

When tarantulas do copulate, the male hooks the female´s fangs with his forelegs and manipulates her into position. Then he inserts his pedipalpal bulb--which he has filled with sperm--into her epigastric opening. A few weeks later, the female produces an egg sac. Following an additional six or seven weeks, hundreds of tiny spiderlings may hatch to begin the cycle anew.

Prentice watches the male creep to the lip of the burrow. After touching the silks and probing the hole, the spider begins the courting process by sending out its shrill calls and drumming a staccato rhythm on the ground with his pedipalps and front legs. For several minutes he beats this tattoo, hoping to entice the female outside.

Without notice, the female launches from her lair, but she´s violent and unreceptive. A mad scramble begins. The spiders grapple and tumble furiously, a 16-legged tangle. Somehow the male breaks loose and retreats several inches to safety. The female descends back underground.

Then, inexplicably, the male reprises his courting rhythm, apparently not thwarted by unmistakable rejection and narrow survival. He drums persistently, to no avail. Finally, with the female failing to reappear, the male walks off into the underbrush, presumably in search of a more willing partner.

Writer Pete Taylor ventured out at night with scientists for this story. His article on flying squirrels also appears in the National Wildlife Magazine June/July 2000 issue.