The Bird That Never Forgets 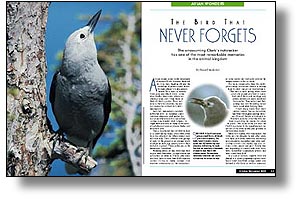 AUTUMN COMES EARLY in the mountains of western North America, heralded by crisp days, bugling elk and the trembling of golden aspen leaves. In many places it is also accompanied by a burst of activity from gray-and-black birds, somewhat smaller than crows, whose vociferous kraa calls rival those of their all-black cousins. From Arizona to British Columbia, the harvest season has arrived for Clark's nutcrackers.

Each fall, nutcrackers use their powerful bills to hammer open ripening pinecones and gather fat- and protein-rich seeds in a specialized storage pouch under their tongues. A single bird can carry as many as 90 seeds of such favored types as pinyon, limber and whitebark pine.

Then a nutcracker flies off with its load to a south-facing slope, often miles away from the collection site, where winter snow will melt early. There, it buries small groups of seeds in the ground at an average depth of about an inch, and quickly covers them with dirt or gravel. These caches are, to the human eye, unmarked.

Working almost all day every day from August until December, a single nutcracker can collect as many as 33,000 pine seeds and bury them in more than 2,500 separate caches. Using so many storage sites amounts to insurance for the nutcrackers, as some caches are inevitably pilfered by hungry rodents or lost to decay.

But more remarkable than the prodigious energy nutcrackers invest in storing food is their success at recovering it. They nest in early spring, when snow covers the ground and food is scarce. Both adult birds and nestlings rely almost entirely on seeds recovered from caches. Nutcrackers and their young may still be eating stored seeds a year after burying them.

"How these birds find their caches looked like an incredible feat when we began studying them," says Russell Balda, a biologist at Northern Arizona University who has been researching the species for about 30 years. "We soon found out that the Clark's nutcracker is the spatial memory superstar of the avian world, and possibly of the vertebrate world."

Balda first studied wild nutcrackers, but in the past two decades he and other scientists have performed extensive laboratory tests on captive nutcrackers and other seed-storing corvids (the family that also includes crows, ravens and jays). Slowly, they are beginning to understand how these birds remember so precisely where they have stored their food.

In a typical lab test, captive birds are placed in a room containing a given number of small dirt-filled storage spaces embedded in the floor, as well as scattered landmarks, such as wall posters or plastic pipes projecting from the floor. Nutcrackers and jays are tested on how well they remember where they've stored pine seeds that they cached during previous visits.

Comparisons between species have shown that memory is closely linked to need. Nutcrackers and pinyon jays, which both feed almost entirely on stored food while nesting, have excellent memories. Mexican jays and western scrub jays also store seeds, but they nest later in the year when insects are abundant and don't rely nearly as much on their caches. They forget storage locations much more readily than do the first two species.

How do nutcrackers remember so well? Basic anatomy reveals an easy answer: They have a large hippocampus, a part of the brain associated with spatial memory. Figuring out how they use that mental capacity, though, is tricky.

Many of the tests have established what caching birds don't do. They don't heed markings on the ground. They don't smell buried seeds. They don't remember the order in which they created caches. They don't duplicate their flight path when caching and recovering.

What, then, do they do? Recent work by University of Nebraska biologist Alan Kamil and colleagues has shown that the birds note landmarks and are able to understand geometric relationships between them. For example, nutcrackers are able to find seeds buried halfway between two markers even after the markers are moved.

"If you remove the landmarks, they can't find their caches," says Kamil. "They seem to remember something about the relationship of cache sites to multiple landmarks. That they can use rather abstract relationships, like an equal distance between two landmarks, suggests they're very flexible."

Wild nutcrackers generally store seeds in rugged, forested places with ample landmarks, such as boulders and trees, that presumably allow them to home in on storage sites. But teasing out how they perceive variables such as distance and direction from markers--and how they manage to remember so many sites--is likely to require further years of testing.

"Memory turns out to be like an onion," says Kamil. "You peel away one layer and there's another. You find that the more you learn the less you know."

Balda and Kamil also wanted to probe differences in how well birds remember different caches. One of their experiments showed that nutcrackers seem to recall some cache locations better than others, and they excavate the best-remembered sites first. That makes ecological sense: The birds usually bury far more seeds than they need, and only if food supplies remain scarce for a long time will they need to find caches that aren't precisely remembered. This overstorage is significant, as seeds that aren't recovered can sprout into new pines, thereby benefitting both the trees and future generations of nutcrackers.

These and other experiments are slowly leading up to a big question: Are birds with better memories more successful--that is, do they survive longer or bear more offspring? The answer to this question may have relevance far beyond the avian world, helping scientists determine whether intelligence is an adaptive trait like strength or resistance to disease.

It may seem obvious that smarter nutcrackers--that is, those with better memories--would live longer or produce more offspring than less well-endowed nutcrackers, but Kamil says it's not so easy. "There might be costs to being smart," he says, "such as the cost of carrying a bigger brain around."

Finding the connection between smartness and survival is a difficult task that can't be accomplished in the laboratory alone, and will likely fuel further years of research. What's already known, though, is enough to give a new perspective to anyone watching the antics of wild nutcrackers: These bird brains are no dummies.

Writer Peter Friederici watches nutcrackers in the mountains near his home in Arizona.