The Strange World of the Shrike 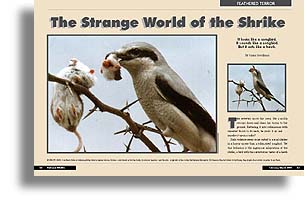 The hunter spots his prey. He quickly swoops down and slams his victim to the ground. Battering it into submission with repeated blows to its neck, he picks it up and . . . impales it upon a spike?
Such violence seems more suited to a mad slasher in a horror movie than a robin-sized songbird. Yet this behavior is the ingenious adaptation of the shrike, a bird with the carnivorous tastes of a hawk without the raptor´s full set of predatory equipment. Like hawks, shrikes have keen eyesight and sharp beaks, but they do not have the same powerful talons. "They are perching birds with delicate feet," says Carola Haas, a wildlife ecologist at Virginia Polytechnic Institute in Blacksburg. "Consequently they can´t hold on to their food and eat it at the same time."


So what´s a hungry shrike to do but look to nature for the necessary silverware? The birds use everything from cactus spines to hawthorn thorns to barbed wire barbs for skewering their prey, which includes insects, amphibians, reptiles, other birds and even small mammals. The two American shrike species, the loggerhead and the northern, are the only songbirds in the country that regularly prey on other adult songbirds. But despite their butchering habits, shrikes are in trouble. Data are scant for the northern, which breeds in Alaska and Canada, and ranges as far south as New Mexico in the winter. But the loggerhead, once found throughout most of the United States (as well as in Canada and Mexico), has declined an average of 3.6 percent yearly since 1966, according to U.S. Geological Survey figures.

Elsewhere across the globe, the situation isn´t much better for shrikes. "There are 30 species of true shrikes in the world and just about all of them are showing a decline," says Eric Atkinson, an avian ecologist at Marmot´s Edge Conservation, a nonprofit education and research group in Montana.

Despite fewer birds to study, scientists have discovered that the shrike´s hunting behavior serves more than one kind of appetite. Impaled victims function not only as dinner but also as billboards that advertise the prowess of males, which skewer more prey than females. And in mating season, the body count rises along with the incidence of inedible but eye-catching objects such as ribbons and feathers.

Biologist Reuven Yosef, now the director of the International Ornithological Center in Elat, Israel, set out to test the theory that the bigger the billboard, the better the results. Yosef transferred impaled prey from male northern shrikes with bountiful displays into the territories of less prolific hunters. And sure enough, females were wowed by the ad campaign. Not only did males with more prey attract more females, their mates also laid more eggs and subsequently fledged more young.

"I don´t think that display is the origin of this impaling behavior, but it makes sense as a secondary advantage," says Haas. "Shrikes do leave a lot of prey uneaten--all that work hoisting something heavy onto a thorn and then just forgetting about it--that does seem like an inefficient thing for a predator to do."

Generally shrikes hunt from atop a perch, using their superior vision to locate their quarry. Atkinson discovered that, in winter, the northern shrike sometimes sings for its supper instead. "While in the field in Idaho, I became curious about a few very vocal individuals," he recalls. "At first I thought they were at the mercy of hormones, but then I noticed they were singing a different song when they were down low in willows or bushes. When a few songbirds approached, the sounds stopped and the shrikes attacked."

To test the idea that the northern shrike uses a siren song to lure its avian prey, Atkinson compared the effect of playing a tape of the shrike´s calls with that of a blank tape and a robin´s song. Sure enough, the sounds made by shrikes attracted far more finches, sparrows and other small birds than the two other tapes. "Parts of the song sounded enough like a generalized distress call to make these birds curious and want to come closer but not enough like that call to alarm them," says Atkinson. "This was sometimes a fatal error."

With so many innovative and successful hunting strategies, why are shrikes disappearing? Experts aren´t quite sure. Habitat change and loss are part of the reason, but the number of shrikes is dropping even in regions where their habitat still exists.

Shrikes need open habitat with lookout perches from which to spot prey. But much of the northeastern United States, once open farmland, has reverted back to forests. Many remaining farmers no longer raise livestock in open fields, but grow row crops such as corn that obscure prey. The surviving pastureland has also changed, Haas points out. New exotic grass species grow in solid masses and make for harder hunting than native varieties that grow in bunches and let shrikes spot prey. In the Southeast, the once-extensive pine savannas have been largely lost to development or pine plantations, further eroding shrike habitat, Haas adds.

Pesticides may also play a role in the decline. Some researchers think that shrikes, high on the food chain, may be ingesting too many toxics. But other studies suggest that pesticides´ effects on the shrikes´ food supply may be more of a problem. As Haas comments, "All that work to reduce the insect population definitely makes life harder for the shrike."

Even rural road improvements affect shrikes. "Shrikes are attracted to roads because the fences and power lines near them are great places to perch and impale," says Haas. "Paved roads mean cars can go faster, which is often fatal for shrikes who tend to fly low and slowly."

What can be done to help shrikes? Biologist Yosef advocates adding fence posts to fields and even tangles of barbed wire for nesting sites and places to impale prey. Experts at the Northern Prairie Wildlife Research Center in North Dakota encourage farmers to restrict pesticide use and maintain burned or mowed open areas adjacent to thicker ones to make hunting easier for shrikes. The center also suggests reconfiguring farmland into large, open areas that support enough breeding pairs of shrikes for offspring to find new mates easily.

Scientists haven´t had the funds to test the effectiveness of some of these potential solutions. But the U.S. Navy is waging a very elaborate campaign to save the San Clemente loggerhead shrike. San Clemente Island, 65 miles off the California coast, is home not only to this federally endangered subspecies, but also to a Navy bombing range, to feral goats that eat shrike habitat and to foxes that eat the shrike itself. As a result, the San Clemente loggerhead is one of the most imperiled birds in North America: A recent survey found only 13 adults and 3 fledglings in the wild.

Their ranks may be reinforced soon. The Navy, in partnership with the San Diego Zoo, has set up a breeding program to reverse this downward spiral. "It´s challenging, to say the least," says Pat Witman of the zoo´s Avian Propagation Center. "These birds are very hard to raise in captivity. They are very territorial and require a separate 20-foot cage for each bird."

Successfully releasing these birds into the wild has been even harder. From 1992 through 1995, the program placed about 40 shrikes on San Clemente, but none survived a single year. Then experts decided to pull back and restock--both birds and ideas.

In 1999, the program was raising 50 chicks in its center while another 33 birds moved onto San Clemente. "Before, they used to release single birds of different ages but we´re trying some new strategies," Witman explains. The researchers have placed three females into three different males´ territories, and also set up three breeding pairs on the island and let them raise young in their cages. "We hoped that this would root them in their historic territories," says Witman. "We opened the doors, and last summer one female was out of the cage and laying more eggs.

"Things are looking better, but I´m guarded in my optimism," Witman continues. "The releases don´t mean a thing until the birds make it through this upcoming spring. A whole winter is a long time to hold one´s breath."