Where River Flows Through Forest

In Arkansas, some of the nation's most important bottomland hardwood forests are teeming with both wildlife and controversy 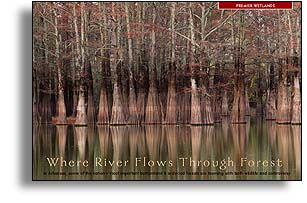 After a tour of Arkansas' White River and Cache River National Wildlife Refuges last summer, Secretary of the Interior Bruce Babbitt clearly was captivated by what he saw. "This is the first time I've been on the White River and I've got to tell you, I've never seen anything like this anywhere in the United States of America," observed Babbitt. "The only place that's even remotely comparable is the pristine headwaters of the Amazon, because of the same amazing phenomenon of rivers flowing through the forest. This is better because of the extraordinary migratory bird flight. People talk about the Everglades; there ought to be the same image of these bottomlands in the national conscience."


If Babbitt has his way, more Americans will soon share his newfound enthusiasm for one of the nation's unique--and least well-known--natural ecosystems: the bottomland hardwood forests of the 160,000-acre White River refuge and the adjacent 45,000-acre Cache River refuge. The two reserves lie in the western portion of the wild, watery region that once dominated the alluvial plain of the Mississippi River. The original bottomland forests encompassed 24 million acres through seven states--the so-called Big Woods that author William Faulkner rhapsodized about in his novels three quarters of a century ago. Today, only about 20 percent of those forests remain.

After decades of timber clearing, draining and agricultural development throughout the region, the two Arkansas refuges and nearby wildlife-management areas--together with Louisiana's Atchafalaya Basin--represent the last major examples of the continent's immense floodplain forests. This distinctive system is home to some of North America's most diverse plants and animals, including bald eagles and other threatened and endangered species, the region's only remaining native population of black bears, and the nation's largest concentrations of wintering mallards. It is also the focus of a contentious conservation controversy.

Currently, the U.S. Army Corps of Engineers is reevaluating a plan to dredge and dike 258 miles of the White River into a 200-foot-wide, 9-foot-deep navigation channel to allow commercial barge traffic to move year-round through the area. Ninety of those miles go through the heart of the White River and Cache River refuges. The estimated cost to U.S. taxpayers: at least $40 million.

The dredging project, which was originally proposed by the Corps a number of years ago, was deauthorized by Congress in 1988 in the face of stiff opposition to the plan. It was revived in 1996 after barging industry representatives lobbied for it on Capitol Hill. "Nothing has changed since Congress scrapped this project the first time, except that the cost to taxpayers has now doubled and the potential threat to the river and refuges may be even greater," says Susan Rieff, NWF vice president for the Southwest region. Converting a largely free-flowing river like the White into an artificially maintained ditch, she maintains, could have serious consequences.

Refuge managers are concerned that a deeper, wider navigation channel could permanently change the unique hydrology of the river, characterized by its significant seasonal flooding. They are also worried that the massive amounts of dredged silt created by the project could destroy wetland habitat for waterfowl and other animals. The refuges support the most fertile natural warm-water fisheries in the region, and dredging and siltation could seriously alter those resources. "This expensive project might benefit private shipping companies," says Rieff, "but it would threaten the river's unique wildlife--and do so at taxpayer expense."

Proponents of the navigation project maintain its environmental impact will be minimal because the section of river bottom that will be disturbed represents just a small percentage of the total river bottom. But the U.S. Fish and Wildlife Service, which has jurisdiction over the refuges, disagrees. Last year, in a letter to the Corps, the agency wrote: "It is very improbable that activities associated with this project ... could ever be considered compatible with the established purposes of these refuges." The agency's basis for such remarks: the National Wildlife Refuge System Improvement Act of 1997, which requires that the biological integrity of the refuge system be maintained.

The White River National Wildlife Refuge was established in 1935, primarily because of its value to migratory waterfowl. In those days, the area's thick swamplands, filled with mosquitoes, snakes and saunalike summertime humidity, were impenetrable to all but the most adventurous hunters and fishermen.

Today, much of the refuge remains mysterious and remarkably wild. Its boundaries encompass 95 miles of the lower White River near the waterway's confluence with the Mississippi River. The smaller Cache River National Wildlife Refuge was created on nearby lands in 1986 to protect additional bottomland hardwoods. Every year, both reserves become partially flooded during winter and spring. During those years when river flows are high, as much as 90 percent of the White River refuge is covered by water. This is truly a river flowing through the forest. As the water recedes into the river channels, more than 350 lakes are left in its wake.

"When visitors come here for the first time, they always comment about the lakes," says White River refuge manager Larry Mallard. "They are amazed at how many lakes there are, and they are awed by the size of the trees."

University of Arkansas researcher Dave Stahle has documented 1,000-year-old cypress trees growing in the refuge. "I wouldn't doubt there are some trees older than 1,000 years," he says. "These are the oldest trees we know of in Arkansas."

In the refuge, the bald cypresses tower over many of the lakes. In the water beneath their knobby knees, a system of leaf litter, alluvial soil and ever-changing water depths nourish a complex web of life that includes vast communities of insects and crustaceans. A 1995 study found 21 mussel beds in the 90 miles of White River within the refuge, including the endangered pink mucket. More than 100 species of fish have also been documented there. As water levels drop, many of the fish are trapped in the lakes during spawning season. Then the White River waters rise and mix all these species into one rich soup, before the process begins again.

All of this watery wildlife habitat attracts huge numbers of birds. Some 230 neotropical migrants and other species have been counted in the two refuges. More than 300,000 ducks winter there each year, mostly mallards, but also several other species. Researchers have discovered that while wintering in the refuge, the waterfowl feed heavily on the complex diet available in bottomlands, such as moist-soil plants and invertebrates. "We're concerned that such food sources will be destroyed if alterations take place in the river," says Mallard.

Long ago, the Mississippi and its tributaries, including the White River, writhed over this region like an unmanned fire hose, cutting new channels and leaving oxbow lakes and rich soil in their wakes. Today, the widest part of the Mississippi's alluvial plain, known simply as "The Delta," stretches from Little Rock to Memphis. Arkansas contains more Delta land than any other state, but much of it has been cleared and drained for agriculture. Only about 11 percent, or 845,000 acres, of the state's original bottomland forests remains.

Ten years ago, the RAMSAR Convention, an international treaty for wetlands preservation, recognized the importance of these remaining bottomland hardwood forests by designating them as "Wetlands of International Importance," along with Florida's Everglades, the Chesapeake Bay and Georgia's Okefenokee Swamp. But that designation has not helped safeguard the ecosystem.

The current navigation plan is the latest attempt by the Corps to tame the waters of the Delta. From 1941 to 1964, the Corps built six major dams in the White River's Ozark Mountain headwaters, all located within 200 miles of each other. The business and recreational opportunities created by the dams became engines of change in the Ozarks, fueling a tourism and business boom that has made northwest Arkansas one of the country's fastest growing areas. But with such progress also came problems.

The dams, built to control flooding and produce electricity, altered the temperature of the White River by releasing colder water. Ever since, as mitigation for the smallmouth bass and other warm-water fisheries destroyed directly below the dams, federal authorities have stocked the river with nonnative species of trout, producing a successful trout fishery in the process. But populations of several fish native to the area have since seriously declined.

"The river changed," recalls Frank Rich, who for years operated a commercial fishing operation in Clarendon, Arkansas. "It got colder, and it was full of silt. It used to be full of minnows, but they are all gone." Rich saw his annual fish harvest drop from 6.5 million pounds in the 1940s to 180,000 pounds in 1960, the year he retired.

Today, as the gateway to the two refuges, Clarendon is the center of a multimillion-dollar sporting business. Nearly 100 duck-hunting guide services are headquartered there, and bird-watching and other ecotourism businesses are also developing. But elsewhere in the state, Arkansas' status as the nation's leading rice-producer is threatened by declining groundwater supplies, which are being drawn down by farms and other users faster than the aquifers can replenish themselves. As a result, in addition to the Corps' proposed navigation plan, five irrigation projects that would divert water from the White River or its tributaries for agriculture are now on the drawing boards.

"I'm worried about the cumulative effects of all these projects," says Larry Mallard. "I don't think the natural system has the ability to recover from too many unnatural changes. We're talking about irreplaceable resources. These refuges are American treasures and they belong to all Americans."

Writer Steve Wright grew up along the banks of Arkansas' White River.


NWF Takes Action: Protecting Bottomland Hardwood Forests
The lower Mississippi River Basin supports some of the nation's richest and most unique wildlife habitat. As part of its ongoing efforts to protect such areas, NWF is currently attempting to stop or improve the design of several water-development projects in Arkansas and Mississippi.

With its affiliate, the Arkansas Wildlife Federation, and other groups, NWF is actively opposing proposed navigation and irrigation projects that would destroy bottomland hardwoods and clog fish and mussel habitat with sediment in the White River and other Arkansas waterways. In Mississippi, NWF has taken the Army Corps of Engineers to court to try to stop other proposed projects.

NWF Conservation Hall of Fame
When the White River National Wildlife Refuge was established in 1935, a seasoned federal biologist named Ira Gabrielson had just taken over as chief of the Bureau of Biological Survey--the agency that later became the U.S. Fish and Wildlife Service. In the years that followed, Gabrielson oversaw efforts to protect millions of additional acres of wetlands for waterfowl and other wildlife. He is one of 25 Americans who have been inducted into the National Wildlife Federation Conservation Hall of Fame since its founding in 1963. For more about Gabrielson, read the National Wildlife article "He Brought Order To America's Wildlife Management Efforts" by Robert Darland.