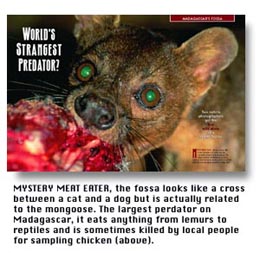 In the island of Madagascar, off Africa´s east coast, nothing is what it seems. Primitive primates called lemurs fill the ecological roles of woodpeckers, squirrels and monkeys. Small, spiny, pointy-nosed creatures known as tenrecs are the equivalents of shrews, moles and hedgehogs. And a strange-looking carnivore related to the mongoose hunts like a cat.

That carnivore is called the fossa, and until recently, its life-style and behavior were largely a mystery. Fossas are rarely seen and had apparently never been photographed in the wild. Now, they have become the subject of scientific scrutiny, including field studies by Luke Dollar, a graduate student at the University of Tennessee. And last year, wildlife photographers Pete Oxford and Reneé Bish provided these first-of-a-kind pictures after two separate encounters with the animals in Madagascar.

The fossa, which looks like a cross between a dog and a cat, with a few other animals thrown in for good measure, is one of the world´s oddest meat eaters. It has a nose like a dog´s, teeth like a leopard´s, and whiskers like an otter´s. "Fossas look a bit like a short, stocky puma with a long tail, but they have the tenacity of a mongoose," says Dollar, who is studying these strange creatures in Ankarafantsika National Park. Oxford has his own interpretation: A fossa, he says, "looks like a bodybuilder on steroids." 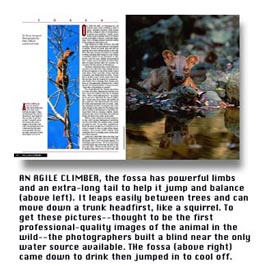 The explanation for the strange appearance of fossas and other Madagascar animals goes back some 160 million years ago in geologic time. That´s when Madagascar­­an island about one and a half times the size of California - ­­broke away from Africa and drifted off like a giant ark. Only dinosaurs and a few primitive birds and mammals were on board. Later, the mainland ancestors of primates and a few other animal groups made it to the island, probably by rafting on floating logs or vegetation. Because there were no monkeys, rabbits, horses, antelopes, pigs, cats or dogs there, the castaways found just about every niche up for grabs.

With no other carnivores around, mongooses and civets became Madagascar´s predators, and the fossa filled the hunting niche usually occupied by cats. At one time, scientists believed the fossa actually was a primitive cat because it seemed to have so many feline characteristics. But recent DNA studies have confirmed that it is actually more closely related to the mongoose.

Large eyes, retractable claws and long, daggerlike canine teeth make the fossa a formidable hunter. For a 22-to-26-pound animal, it is amazingly agile in trees. Its low-slung body, powerful limbs and extra-long tail help it balance and jump. "Fossas can leap from one tree to another, land head down on the trunk, then swarm down the tree head first like a squirrel," says Dollar.

The animals will eat just about anything they can find, including insects, reptiles and rodents, but they are thought to be specialized lemur hunters. Equally at home running along the ground or chasing through the canopy, they cruise the forest looking for a vulnerable ringtail or a sleeping sifaka. "They can cover a lot of ground in 24 hours­­often as much as 5 to 10 kilometers [a little more than 3 to 6 miles] in a night," says Dollar, who has radiocollared 14 animals at seven different sites in Madagascar.

Fossas are found throughout the island wherever there is forest, but they are rare, and their numbers are unknown. As Madagascar´s largest predator, they have no natural enemies, but local people kill them because they sometimes attack chickens. They are listed as vulnerable by the IUCN­­World Conservation Union not only because they are threatened by deforestation, but because they reproduce very slowly. 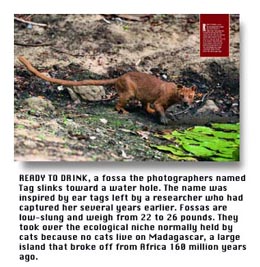 Born blind and toothless, and about the size of a stick of butter, fossa young do not open their eyes for about three weeks and do not leave the nest until they are four months old. Similar-sized bobcats are playing and exploring outside their dens at six weeks. Young fossas are dependent on their mothers for well over a year and do not breed until they are about three years old, by which time bobcats have already had a litter or two.

To get the first of their unique pictures of the fossa, Oxford and Bish built a blind in the forest near a pool where they thought a fossa might come to drink. Then, they settled in to wait. The result was a brief, lucky encounter, says Oxford, who watched in amazement as the fossa "flowed" off a rock to lie contentedly in the pool. In keeping with its other odd characteristics, it looked, Oxford says, "just like the giant river otter of South America."

Fiona Sunquist, a roving editor of this magazine, frequently writes about predators.

Pete Oxford, together with his photo partner Reneé Bish, has visited Madagascar more than 15 times.