From Florida's Sanibel Island to Oregon's Williamette Valley, people are putting out the welcome mat for ospreys and the birds are flourishing 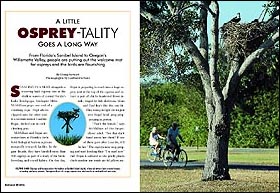 STANDING IN A SKIFF alongside a towering bald cypress tree in the shallow waters of central Florida's Lake Istokpoga, biologist Mike McMillian grips one end of a climbing rope. High above, clipped onto the other end, is a woman named Lourdes Rojas, decked out in rock-climbing gear.

McMillian and Rojas are researchers at Florida's Archbold Biological Station, a private nonprofit research facility. In the past decade, they have banded more than 500 ospreys as part of a study of the birds' breeding and travel habits. On this day, Rojas is preparing to reach into a huge osprey nest at the top of the cypress and extract a pair of chicks hunkered down inside, ringed by fish skeletons. Mom and Dad don't like this one bit. They sweep in tight circles just over Rojas' head, peep-peep-peeping in protest.

"That's the female," says McMillian of the larger, closer adult. "See that dark band across her chest? If one of them goes after Lourdes, it'll be her." The ospreys now stop peeping and start honking their "I'm-mad-now" call. Rojas is unfazed as she gently places chick number one inside an old pillowcase. "I had an adult throw a fish at me last week," she yells down while lowering the pillowcase on a rope to McMillian. "That was a first."

The osprey is one of wildlife biology's great success stories in this country. From remote Lake Istokpoga to the sandy tourist mecca of Sanibel Island in Florida, and from the Chesapeake Bay to Oregon's Willamette Valley, osprey populations in the United States are growing, in some cases spectacularly. In the 1950s and 1960s, the eggshell-thinning effects of DDT devastated the raptors' numbers in North America. But with the chemical banned, osprey populations since the early 1980s have more than doubled in many regions. Today, by some estimates, more than 15,000 breeding pairs of the birds range throughout the nation.

Few raptors are as charismatic as ospreys. With their huge nests and dramatic fish-hunting skills, they're easy to identify and watch, and relatively tolerant of human activity. In fact, they've come to rely on human activity--in particular, the erection of artificial structures on which to build their giant nests (which makes observing them that much easier). Human interference, which nearly wiped out the species, is now helping it flourish again.

Ospreys, or fish hawks, inhabit every continent except Antarctica. In this country, roughly half of the birds nest along the East Coast or the Gulf of Mexico. The Chesapeake Bay alone hosts roughly 1,500 breeding pairs. Other large populations of the raptors are found in the Pacific Northwest, in the Northern Rockies (where they feed on reservoir fish) and near the Great Lakes.

If ospreys have a utopia, it could be Lake Istokpoga, home of what may be the densest concentration of nesting ospreys--more than 700 at last count--in the world. The 28,000-acre lake's undeveloped shores are lined with majestic, moss-draped bald cypress trees, and one after another holds an osprey nest--sometimes two. The trees' relatively sparse upper branches offer an unencumbered nest site with a 360-degree view. The heavily buttressed trunks are surrounded by water, which repels raccoons as effectively as a castle's moat. The lake, moreover, is shallow and teeming with large fish. Ospreys, unlike pelicans and many other fish-eating birds, dive feetfirst and so have to nab fish swimming near the surface or in shallow water. Because ospreys haul their catch home one at a time--in their talons, not their mouths--small fish aren't worth the chase.

In the skiff, McMillian gingerly examines the day's first osprey chick. Warm and fishy smelling, the nestling calmly appraises its captor with large orange eyes. The chick is perhaps five weeks old, yet already weighs close to four pounds, as much as a typical adult. This is one well-fed baby. "If I were holding an adult like this, I'd be ripped to shreds by now," says McMillian. Two or perhaps three nestlings are a typical brood for ospreys.

In general, ospreys like to build their nests in the tops of dead trees, if any are available. (In marshes or on small islands where raccoons, great horned owls and other predators are absent, ospreys may nest in low trees or even on the ground.) Nests are an impressive tangle of sticks, sometimes reinforced with the odd bicycle tire or bit of fishing net. A big nest can weigh half a ton. Difficult to build, a nest is typically maintained and enhanced year after year by the same pair of birds. But this doesn't mean ospreys mate for life. "It's probably more accurate to say each individual is attached to a nest and defends it against others of its own gender," says Mark Martell of the University of Minnesota's Raptor Center. "It may not make much difference to either bird if the same partner comes back or not." What's important is hatching eggs.

Osprey pairs don't migrate together. Males and females head south in the fall at different times and go to different places. For six years, Martell has followed the travels of more than 100 ospreys that he fitted with satellite transmitters. "The big surprise has been in South Florida," he says. Ospreys there were thought to stick around all year, enjoying the fish and warm weather. Some do indeed stay in the area. "But it turns out," he notes, "that some go to Bolivia and Brazil."

Martell does not yet know why some birds leave while their neighbors stay. In spots less bountiful than Lake Istokpoga, ospreys have to compete for food and nest sites; stay-at-homes may have a nesting advantage over late arrivals. Still, though migration would seem to be a costly, risky activity, it must have its benefits. Perhaps the fishing in Bolivia is fantastic.

When ospreys do return to their breeding sites, their nests may have disappeared. Dead, brittle branches can't always support a construction the size of a piano. The instability of dead trees, coupled with the suburbanite's eagerness to chop them down altogether, has hampered the species' post-DDT comeback. But it would be worse if Americans didn't build so many osprey-friendly structures, intentionally or not.

"The great majority of coastal osprey nests today are on artificial sites," says ornithologist Alan F. Poole, author of Ospreys: A Natural and Unnatural History. "On the New England coast between New York and Boston, it's close to 100 percent."

Many of these sites were never intended as osprey homes. There are osprey nests on harbor buoys, channel markers, chimneys, telephone poles and cell-phone towers. Ospreys may learn about unconventional nesting sites by watching their peers. In the Willamette Valley, the osprey population has exploded--to 202 nesting pairs last year from just 78 seven years earlier--as the raptors build nests on power poles that farmers put in along the fish-filled Willamette River. Birds and electricity don't always mix, however. An osprey nest on a power pole in Orlando in 1997 caused a fire that closed down Interstate 4 during rush hour.

Platforms put in expressly for ospreys' use, unlike accidental perches, are apt to be not only safer but also more stable, easier to build on, tougher for predators to climb and usually better sited. In many coastal communities, a backyard osprey nest is a status symbol. In New Jersey, wildlife authorities use helicopters to drop sharpened wood poles into salt marshes like giant darts; even poles that wind up leaning at weird angles manage to lure ospreys eager for nest sites. "Like it or not, we've created populations that are dependent on human structures," says Poole. "Ospreys have become the purple martins of the raptor world."

Nowhere have humans welcomed ospreys more enthusiastically than on Sanibel Island, on Florida's Lee Island Gulf Coast. Sanibel is the kind of place where road signs announce, "Caution: Gopher Tortoise Crossing," and it may have the only main street in America named after a mollusk (Periwinkle Way). Here and in communities on the mainland, if homeowners provide the osprey platform, the Lee County Electric Cooperative will mount it on a pole. (Freestanding platforms or extensions rising above normal power poles are preferable to letting the birds build right on the wires.)

Mark "Bird" Westall is a founder of The International Osprey Foundation, based on Sanibel, which funds raptor research. A former mayor of the town, Westall for 22 years has led canoe tours of the mangrove forests and bird-filled shallows of the J. N. "Ding" Darling National Wildlife Refuge on the island's north coast. But canoes aren't necessary to spot ospreys here.

From the backyard of a home overlooking the island's Tarpon Bay, Westall points to an untidy profusion of large sticks on a dock piling 100 feet away. Crowding it are a female and two almost-fledged nestlings. Unconcerned by our presence, the female is ripping into a large fish she's standing on. She doesn't seem terribly concerned about her nestlings' presence either. "She's turned her back on the chicks so she can eat," Westall says. When the bird is finished, she begins feeding chunks of fish to her two screeching offspring. Her slightly smaller mate, which likely brought the food to the family, idles on the dock railing a few feet away.

"People in the 1970s didn't believe that you could have ospreys living in your backyard," says Westall, a nonstop talker in a beat-up, wide-brimmed hat. The birds were thought to be too wary of humans to live so close. The first osprey pole on Sanibel went up in 1974. Local volunteers now keep tabs on about 100 active osprey nests, and there may be others out in the mangroves. The island hosts more than 300 of the birds each spring.

One of the best places to watch Sanibel's ospreys is the local elementary school. From the parking lot, Westall points to a nest on a utility pole in which a mother and chick sit. After some deliberation, junior stands on the edge, spreads his wings and makes a 200-foot beeline to a tree by the school without mishap. "You can see the feathers on its back look like they've been tipped in white, while the mother's got those chocolate-brown feathers," Westall says. The chick has probably just fledged.

Next to the school are a set of tennis courts. Around the perimeter are more than a dozen tall light poles for night games. Five or six have osprey nests on top, including three in a row. "Ospreys attract ospreys," Westall says. The birds probably learn where schools of fish are running by, noticing the direction from which their neighbors return with a good catch. "Potentially every one of these poles could have an osprey nest on it," he adds. "The question is: Would people here tolerate that?"

Back when Westall was in town government, a woman came to a public meeting to ask that a neighbor's osprey platform be removed. The birds, it seems, had begun using the woman's roof as a fish-dissection platform. "And she was a local conservationist!" Westall points out. Yes, even in a green-tinged enclave like Sanibel, he says, ospreys may sometimes be just a bit too successful for their own good.

"Like it or not, we've created populations that are dependent on human structures. Ospreys have become the purple martins of the raptor world."