Catching Bandits in the Smokies 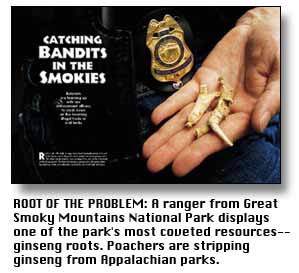 Thunder grumbles over Cataloochee Divide, a 5,000-foot-tall ridge that snakes over the northeast corner of the Great Smoky Mountains National Park in North Carolina. Squatting at the base of a towering silverbell tree, Jim Corbin shakes his head sheepishly. As a plant protection specialist with the North Carolina Department of Agriculture, Corbin spends countless days in the deep woods of the southern Appalachians; he knows better than to leave his rain gear in the car. The first fat raindrops splat on a dense canopy of tulip poplar, red maple and black cherry trees, then drip onto a diverse understory of shrubs and flowers: black cohosh, New York fern, Solomon's seal, Jack-in-the-pulpit, bloodroot, speckled wood lily and Dutchman's pipe. And the coveted plant that Corbin holds between two dirt-stained fingers: American ginseng.

Corbin expertly scrapes dirt from the plant's stem, exposing a gnarly, carrotlike root. He sprays it with two quick blasts from a can of aerosol drying agent, then pulls out a small pill bottle. Two taps of his left index finger is all it takes: A fine orange powder, bright as a hunter's safety hat, spills out of the bottle and onto the ginseng root. Corbin replaces the loamy soil and lightly tamps it down with his palm. "That's it," he says. "That plant is marked for a lifetime."

Marked and safe, Corbin hopes. Selling for $270 to $600 per dried pound of root, wild ginseng is one of the most sought- after species in an exploding international market for native plants. (See list at end of story.) And it's the poster child for an interagency push to stymie the illegal poaching of those plants from public lands. Across the country, botanists are teaming up with law enforcement officers to attach sophisticated marking devices, both hidden and visible, to highly prized wild plants.

An hour after Corbin applies the customized (and environmentally safe) mixture of orange dye, gypsum and organic filler, the dye seeps deep into the ginseng root, permanently marking the tissue with blazes of orange. In addition, the powder contains color-coded silicon granules, each no larger than a coarse flour grain. When viewed under a microscope, those granules will tell law enforcement officials when the root was marked and where it was collected. Such a marking program works on two levels, Corbin explains. "Legitimate ginseng dealers won't accept dyed roots, because they know they were illegally harvested from the national park," he says. "And the silicon granules enable us to identify the plants in court."

Anyone can legally harvest ginseng from their private property and, with a permit, from most national forest lands. National parks, however, are off-limits to plant collectors, and park managers are worried that as ginseng populations are being increasingly whittled down on private lands, collectors are turning to public lands.

Ginseng poachers in particular prize the protected and secluded hollows of national parks, and have targeted the Little River Canyon National Preserve in Alabama, Mammoth Cave National Park in Kentucky, Shenandoah National Park and the Blue Ridge Parkway in Virginia, in addition to the Great Smokies. 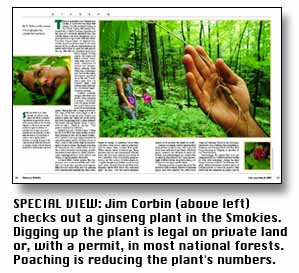 Increasingly, the plants they seek are being protected by countermeasures worthy of Cold War espionage. Along the Blue Ridge Parkway in North Carolina and Virginia, hidden electronics monitor stands of pitcher plants. In western deserts, tiny metal tags are implanted in prized cacti to identify recovered plants. Microtaggant, a powdered marker developed for the explosives industry, is being used on the Blue Ridge Parkway for marking galax. In Arizona, Corbin's dye marker is used to combat the theft of petrified wood. And across the country, seismic detectors placed on trailheads alert rangers to the footsteps of potential poachers.

For law enforcement officials who have long relied on traditional--and time-consuming--surveillance techniques, the new technologies are a revelation. "The dye and silicon markers are as good as having a bar code on the plant," says John Garrison, a law enforcement specialist for the Blue Ridge Parkway. "Now we can say, These plants are the property of the U.S. Government, no ifs, ands or buts.'"

The effect on poaching in the Great Smoky Mountains National Park, Garrison says, has been "dramatic." And the new technologies could not have come at a better time. In the Great Smokies, monitored ginseng plant populations are healthy, but only if they are protected from all harvesting. That's hardly the case. Park officials estimate that $5.3 million worth of ginseng roots were pilfered from the park in the last nine years alone.

Already, wild populations of the closely related Asian ginseng have been extirpated across China, and wild-growing plants can now only be found in eastern Russia. In the United States, ginseng grows wild in a swath that reaches from New York to Alabama, and as far west as Missouri. It's an inconspicuous herb, growing some 6 to 16 inches tall, with compound leaves formed of five serrated leaflets. Fond of shade and moist, rich woods, ginseng produces small, bright red berries gleaned by deer and wild turkey.

But it's the ginseng root that spawns human lust and greed. Wrinkled as an old man's face, a mature wild ginseng root grows long and tapered, often with arm- and leg-like forks that give it the nickname "manroot." Ginseng has been used for centuries in Asia as an aphrodisiac and a general tonic, properties reflected in its genus name, Panax, which means "cure all," as in "panacea." Native Americans used ginseng to treat coughs and fevers. Early settlers figured it for a dose of good spirits. "It cheers the Heart even of a Man that has a bad wife," wrote Virginia's colonial governor, William Byrd. More recently, ginseng has been alleged to improve memory and lower cholesterol levels, no minor concerns for an aging American population.

Each year, more than 2 million pounds of cultivated ginseng root are exported from the United States, but wild ginseng is held in far higher esteem by buyers. Cultivated roots are considered far less potent than plants dug from the wild, and have a price tag of as little as $15 per pound. Even though the manufacturers of products containing ginseng and other herbs are moving away from wild sources and toward cultivated plants, "the temptation to plunder valuable wild medicinal plants from protected areas in the United States still exists," says Christopher S. Robbins of Traffic North America, a conservation group that monitors the trade in endangered plants and animals.

No one knows how much wild ginseng is taken illegally from parks and refuges across the country. But in 1999, more than 30 tons of wild ginseng roots were harvested legally from the 19 states with federally approved programs for exporting the plant. In the southern Appalachians, collecting ginseng in the wild, known as "'sanging," is part of mountain culture--with or without permits. "It's long been a traditional, walk-in-the-woods, make a little extra Christmas money kind of thing," says Garrison. "For years, we could never get anyone to look at ginseng busts as anything but glorified flower-picking cases."

Then, within a 10-day period in 1993, surveillance teams in the Great Smokies arrested two different groups of ginseng poachers, each of which were leaving the park with 13 pounds of ginseng root--the equivalent of about 8,000 plants. "That sent a shock wave through us," recalls Garrison. In response, Corbin began devising ginseng markers in the basement of his home, in a joint state-federal effort to transfer animal-marking technologies to plants. From tiny metallic strips written in Navajo (Corbin once was a missionary to western Navajo communities), the markers have evolved into the permanent dyes now used on thousands of wild ginseng plants in all corners of the Great Smokies.

The new marking efforts have allowed enforcement officials to rein in demand for park-pilfered ginseng. As legitimate dealers learn of the program and refuse to accept marked roots, poachers are being forced out of the park. And it's also allowed for the return of confiscated roots to their native lands. According to Janet Rock, a Great Smokies botanist, more than 7,000 marked plants have been seized and replanted.

Still, there's plenty of need for old-fashioned "man surveillance," as Great Smokies special agent John Mattox puts it. Rangers watch for the telltale signs of poachers in the woods. Local "'sang" hunters most often dress in subdued-colored clothing and wind up with soiled pants' knees--"no bright Yuppie jackets for them," Mattox says. They also tend to slip out of the woods one-by-one, decoying rangers away from the poacher tapped to carry the group's roots out en masse. Other plant poachers have posed as wildflower photographers. Once Garrison saw a car driven by a woman with a small child, leaving the park just a few minutes after sunrise. "I said to myself, ‘That can't be right'," he recalls. He returned at the end of the day and arrested the woman's husband and father as she picked them up after a day of illegal ginseng harvesting.

Nearly 80 ginseng poachers have been convicted since the marking program began. Punishments have ranged from 60 days in jail and $2,500 in fines to "a slap on the wrist," says Garrison. Few doubt that poachers will continue to slip into the remote hollows, with a sharp stick and eyes searching for the five-leaved manroot. Corbin and his colleagues know they haven't devised a silver bullet out of orange dye and silicon. "These poachers are not dumb," says Corbin. "We have to stay in front of them, which means we'll have to reinvent the wheel in a few years." And he grins like a man with a few tricks still up his sleeve.

With a pound of wild ginseng fetching the equivalent of a week's wages or more, the temptations of "'sanging" on protected lands are readily apparent. But the cure-all root is not the only plant that draws collectors into the woods in the Southeast. Several other species, though not as pricey, are in strong demand for both medicinal and ornamental uses. Here are some of the most popular:

Bloodroot (Sanguinaria canadensis): Native Americans and early settlers used bloodroot to treat snakebite, coughs and as a medicine for sick mules. Currently used in toothpaste and cattle feed. Approximate value: $15 per dried pound; $3 per gallon pot as an ornamental.

Galax (Galax aphylla): Picked year-round for the floral industry; more than 100,000 stems of illegally collected galax were seized along the Blue Ridge Parkway in the first six months of 2000 alone. Approximate value: One penny per stem.

North Carolina writer Eddie Nickens and Virginia photographer Lynda Richardson bushwacked in the rain through the Great Smoky Mountains last summer with park rangers and botanists in search of ginseng.