He Inspired Our Passion for the Oceans 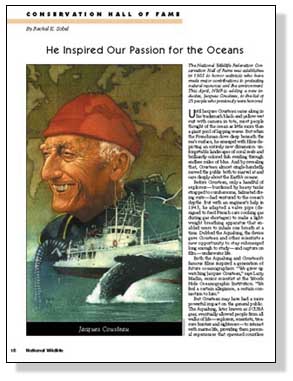 The National Wildlife Federation Conservation Hall of Fame was established in 1963 to honor activists who have made major contributions to protecting natural resources and the environment. This April, NWF is adding a new inductee, Jacques Cousteau, to the list of 25 people who previously were honored.

Until Jacques Cousteau came along in his trademark black-and-yellow wet suit with camera in tote, most people thought of the ocean as little more than a giant pool of lapping waves. But when the Frenchman dove deep beneath the sea's surface, he emerged with films depicting an entirely new dimension: unforgettable landscapes of coral reefs and brilliantly colored fish swirling through endless miles of blue. And by revealing that, Cousteau almost single-handedly moved the public both to marvel at and care deeply about the Earth's oceans.

Before Cousteau, only a handful of explorers--burdened by heavy tanks strapped to cumbersome, helmeted diving suits--had ventured to the ocean's depths. But with an engineer's help in 1943, he adapted a valve pipe (designed to feed French cars cooking gas during gas shortages) to make a lightweight breathing apparatus that enabled users to inhale one breath at a time. Dubbed the Aqualung, the device gave Cousteau and other scientists a new opportunity to stay submerged long enough to study--and capture on film--underwater life.

Both the Aqualung and Cousteau's famous films inspired a generation of future oceanographers. "We grew up watching Jacques Cousteau," says Larry Madin, senior scientist at the Woods Hole Oceanographic Institution. "We feel a certain allegiance, a certain connection to him."

But Cousteau may have had a more powerful impact on the general public. The Aqualung, later known as SCUBA gear, eventually allowed people from all walks of life--explorers, scientists, treasure hunters and sightseers--to interact with marine life, providing them personal experiences that spawned countless new advocates of marine conservation.

His films--aired mainly on a 1960s-70s television show, The Undersea World of Jacques Cousteau--reached even farther. Zooming in on the gigantic eyes of whales and the slinky tentacles of octopuses, he brought such exotic sea creatures into the homes of millions of viewers. "Because of the voice for the ocean that Cousteau provided--and for a while he was pretty much alone in this--people have been drawn to the sea to see for themselves," says oceanographer Sylvia Earle, an explorer-in-residence for the National Geographic Society. "That is really the key," she adds. "If you don't know, you can't care."

Many of Cousteau's films took a bold conservationist stand. "I credit him with some of those first startling images of animals trapped in nets and of turtles strangled by plastic bags," says Bruce Robison, senior scientist at the Monterey Bay Aquarium Research Institute. "The stunning imagery had a real impact." Indeed, through film, Cousteau unveiled destructive practices that most people knew nothing about--the use of dynamite by fishing fleets to stun and kill hundreds of fish, for example. He also exposed the devastating impact of lost fishing gear, which traps or entangles sea lions, dolphins and other marine life.

Cousteau coupled his activist cinematography with public speeches and lobbying. In 1960, for example, he challenged France's plan to dump radioactive waste into the Mediterranean Sea, and policymakers subsequently canceled the proposal. In the 1970s, he convinced the Italian government to remove some 500 drums of toxic chemicals dropped into the Mediterranean by a sunken freighter. Before Cousteau's efforts, the deadly cargo had been tossing about the sea for three years.

Even toward the end of his life--Cousteau died in 1997--the oceanographer was diving and actively promoting conservation. In 1990, he took six children, each from a different continent, to Antarctica on a special mission to call attention to the importance of protecting the Antarctic environment.

Cousteau's love of film began in childhood. At age 13, he purchased a movie camera and organized a film company, where he starred as producer, director and actor. Cousteau's fondness for the oceans blossomed later, after a car accident at age 26 left him with two broken arms and several crushed ribs. His doctor prescribed swimming as therapy. In the Mediterranean, just off the coast of southeast France, Cousteau put on goggles for the first time and grew ecstatic: "I saw fish," he said. "I raised my head and saw a streetcar, then descended again and saw a jungle of fish." Soon enough, the new underwater explorer took his passion for film-making to the sea: His 1956 documentary Silent World earned him an Oscar.

When Cousteau first set eyes on the underwater world more than half a century ago, it seemed like an infinite sea of life that could not be damaged by human activity. But after a few years of diving, he witnessed changes that turned him into a staunch conservationist, fiercely defending marine life as part of a living matrix that made the Earth habitable for humankind. When Cousteau died, he returned--as his wife said--to the Silent World, but his perspective still resonates deeply in this one today.