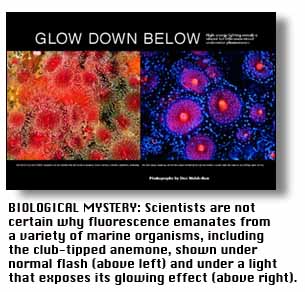 Marine biology has always fascinated Californian Dan Welsh-Bon. So it's not surprising that he jumped at the opportunity in 1995 to take part in a project in the Florida Keys, where researchers were investigating the fluorescent glow that emanates from a variety of ocean creatures.

Then a graduate student studying remote sensing in corals, Welsh-Bon had heard about the phenomenon. But even though he was an experienced diver, he had never seen examples of fluorescence in the sea.

Joining the group on a night dive, Welsh-Bon expected darkness to guise the many features of the deep. Instead, the researchers' use of black light--so-called because such light is undetectable to the human eye--revealed a rainbow of colorful, vibrant patterns to Welsh-Bon. "I've got to get this on film," he thought to himself, awed by the natural spectacle.

Some marine creatures that divers encounter make their own glow. They manufacture light the way fireflies do, through a chemical reaction known as bioluminescence. Everything needed to produce the glow is contained within these organisms, and the resulting illumination can be readily seen with the naked eye.

Not so with fluorescence. "It is the name we use for the absorption of light at one wavelength and its reemission at another wavelength," explains Charles Mazel, a former Massachusetts Institute of Technology ocean engineer who has been studying the effect for several years. "What that boils down to is that some things will glow when you shine the right light on them."

Fluorescence is fairly widespread in corals, sea anenomes and other creatures throughout marine ecosystems. But because the study of this phenomenon is still in its infancy, experts do not yet know what function the glow serves--if any. There are theories, however.

"Fluorescent pigments may act as a type of natural sunscreen, protecting corals from solar radiation," suggests Welsh-Bon. The pigments absorb ultraviolet (UV) rays, and in the process of doing so, the UV light is converted to visible light, which does less damage to the coral's tissue. 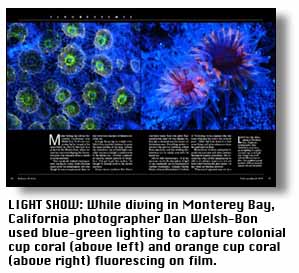 Other hypotheses regarding the function of fluorescence range from aiding in photosynthesis to attracting prey to serving as warning coloration. The phenomenon could also, says Mazel, "be a by-product effect in pigments that are present for other biological reasons." But even if that is the case, he points out, fluorescence would still provide researchers with visible evidence of chemical processes taking place within marine organisms.

The scientist has devoted much of his career to developing innovative methods and instrumentation for imaging and measuring amounts of fluorescence in the ocean realm. The technology may someday be a useful and noninvasive tool for assessing the health of ocean ecosystems and the diversity of life present in them.

"I began investigating underwater fluorescence in 1975, but only launched into it in earnest in 1986," says Mazel, who now conducts research for Physical Sciences, Inc., in Massachusetts. "I was astounded that I had fallen into a hole in science." In 1987, he succeeded in taking the first photographs of fluorescence coming from organisms in the natural environment.

Mazel was testing new equipment on the night dive six years ago that launched Welsh-Bon's interest in photographing the brilliant spectacle. Although he was already an accomplished underwater photographer, Welsh-Bon knew that he needed to develop a fresh approach if he wanted to effectively portray this optical effect on film. In the past few years, he has experimented with a wide range of lighting techniques. Some of those techniques produced the vibrant images that you see here.