In Search of Guilt-Free Seafood

What can a concerned consumer eat? 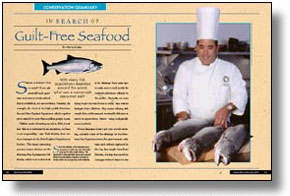 Salmon or lobster? Cod or squid? If you ask yourself such questions and want to avoid seafood that is overfished, you are not alone. Consider, for example, the chefs at the high-profile Monterey Bay and New England Aquariums, which together serve seafood to more than a million people a year.

"Within weeks of starting my job in 1998, I realized that as a restaurant in an aquarium, we have to act responsibly," says Todd Mulder, food services manager at the New England Aquarium in Boston. The same reasoning governs menu choices at the Monterey Bay Aquarium in California, which took a close look at its offerings three years ago to make sure it could justify the seafood selections offered to the public. "Basically, we were trying to get our own house in order," says marine biologist Steve Webster. That means offering fish caught from well-managed, sustainable fisheries or raised in aquaculture "farms" using ecologically sound methods.

If such language doesn't get your mouth watering, consider some of the offerings on the Monterey Bay Aquarium menu this past summer: calamari and salmon captured in the bay, line-caught tuna from Hawaii, shrimp harvested in Georgia without harm to sea turtles, wild-caught New Zealand cod and a variety of farmed items including catfish, trout, striped bass, tilapia, oysters, mussels and clams. At the same time, the New England Aquarium menu offered shrimp, crab and lobster from Maine, Iceland haddock, Prince Edward Island mussels and yellowfin tuna from various sources.

As these institutions know full well, the facts about declining seafood stocks are alarming. In a report to Congress in 1999, the National Marine Fisheries Service concluded that 98 species in U.S. waters are overfished and called the status of another 674 species "unknown."

Conservationists believe many species in the unknown category are also depleted. Worldwide, supplies of prized species like salmon, tuna, haddock, cod, swordfish, shark and lobster are dwindling in many prime fishing grounds. Marine scientists estimate that 60 to 70 percent of the world´s commercial fisheries need urgent attention.

Other problems include "bycatch"—the accidental capture of unwanted species, which kills about one of four animals extracted from the sea—and habitat destruction by modern fishing techniques, such as ocean-floor trawling.

Still, plenty of seafood populations are doing just fine, and many are fished sustainably, without jeopardizing natural stocks. The trick for conscientious consumers is to find those fish on the menu or in the supermarket. And that is not a simple matter. There´s no direct correlation between the health of local fisheries and the availability of fish in grocery store shelves or markets: The product can be imported from anywhere. In many cases, no one in a store can tell a customer where the seafood is coming from, and even if they could furnish that information, you might not know how to make sense of it.

So what is a discriminating cook or restaurant-goer to do? At the New England Aquarium, the kitchen sends its menus to the facility´s conservation department for approval. For the rest of us, the bad news, says Mulder, is that "there´s a lot of conflicting information out there." But, fortunately, some helpful resources are becoming available. Both the Monterey Bay Aquarium and National Audubon Society, for example, have recently compiled lists on the best and worst seafood options. "The wise choices you make when you buy seafood and learn more about how fisheries are managed can help assure healthy oceans for the future," the Monterey guide says.

The lists need periodic updating, as fisheries are always changing, for better or worse. "That´s why we only print enough cards to last about three months," says Monterey scientist Webster. American lobster, for instance, was just moved from the Aquarium´s "avoid" category to "proceed with caution."

Any list, Webster acknowledges, oversimplifies issues. The Monterey aquarium, for example, advises people to avoid rockfish, as the species is depleted on the West Coast, off California, Oregon and Washington. But Alaska stocks of the same fish may be robust. New England cod is also on the avoid list. While Gulf of Maine cod is at an all-time low, the nearby stock from Georges Bank—off the coast of Massachusetts—is making a comeback. Swordfish, which is generally classified as off-limits, is caught unsustainably in some parts of the world and sustainably in others.

"These issues are complex," says Anthony Chatwin, a biological oceanographer with the Conservation Law Foundation in Boston. "You have to know not only the species of fish but the stock it came from, and when and how it was caught."

Despite the lists´ inevitable shortcomings, says marine biologist Greg Stone, director of conservation at the New England Aquarium, they "give practical advice to consumers that can help solve problems." Adds Webster, "If you can educate consumers to ask the right questions, that can help determine which seafoods will be offered. If the seller can´t tell you, for example, where its salmon comes from, you might decide to buy catfish instead, or not buy any fish at all. That provides incentives for sellers to supply that information, as well as to get their fish from a sustainable source."

While some are attempting to educate consumers, others aim to feed them. Take the case of Henry Lovejoy, president and founder of EcoFish.com, Inc., based in Center Strafford, New Hampshire. The company was started in 1999 to promote the "ecologically responsible consumption of seafood." It sells "guilt-free" seafood over the Internet from healthy, well-managed fisheries—as determined by an advisory board that includes Webster, Stone and other scientists—and delivers the food directly to its customers. 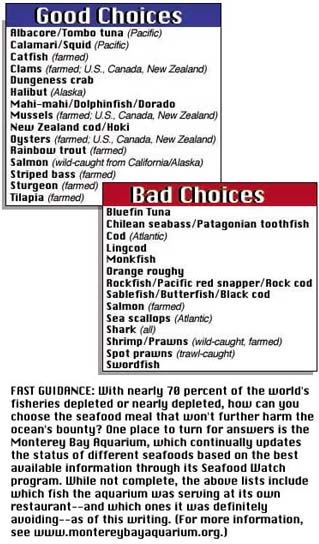 Down the road, well-meaning consumers may be greatly assisted by the Marine Stewardship Council, an independent, nonprofit agency set up in 1997 to support responsible fishing practices worldwide. Clients like the Alaska Department of Fish and Game, for example, pay the council to determine whether the Alaska salmon fishery meets standards the agency has set for ecological sustainability, management effectiveness, habitat protection and minimal bycatch. "We´re trying to establish a rigorous standard that can be applied consistently," explains Jim Humphreys, director of the council´s North American office in Seattle. To date, two fisheries—rock lobster (crayfish) in western Australia and Thames River herring in England—have been certified through the program. About 20 other fisheries around the world are in early stages of the certification process.

For now, says Peter Hoffman, the chef-owner of the Savoy restaurant in Manhattan, "Australian rock lobster and Thames herring are not going to change the New York food scene." Hoffman is also a member of the Chef´s Collaborative, a professional association composed of 1,500 U.S. chefs. "Many of us feel like we´re in a quandary," he says. "If we read the lists of recommended species, items that should be avoided make up a large percentage of our menu."

Hoffman and other members of the collaborative are devising strategies for reducing the impacts of their businesses on fisheries and the environment. They also are trying to educate their customers about sustainable fisheries—without interfering with the dining experience.

Another effort called the Good Fish campaign, initiated by the San Francisco-based Pacific Coast Federation of Fishermen´s Associations, is working with environmental groups to assess smaller West Coast fisheries that might not be able to afford rigorous testing protocol. Association spokesperson Molly Thomas says, "It´s in the best interest of fishermen to have sustainable fisheries, even more so than environmentalists, because their livelihoods depend on it."

Journalist Steve Nadis lives in Cambridge, Massachusetts, where he and his family attempt to eat only sustainably harvested seafood.