By studying which smells wild creatures find irresistible or repugnant, scientists hope to help people live harmoniously with them 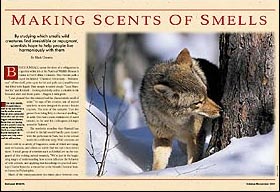 THE NOSE KNOWS: A coyote takes a whiff of the scent left on a tree by another animal. Natural odors convey vital information and can even trigger certain behaviors. Researchers are tapping into this powerful sense by creating artificial aromas that lure or repel wildlife. A scent developed for coyotes may help reduce conflicts with ranchers.

BRUCE KIMBALL opens the door of a refrigerator in a spotless white lab at the National Wildlife Research Center in Fort Collins, Colorado. The chemist pulls a round tin labeled "Chemical Attractants--Malodorous" off the shelf, pries open the lid and pulls out a small brown vial filled with liquid. This sample is called simply "Lure Number Six" and Kimball--looking decidedly unlike a scientist in his flowered shirt and khaki pants--fingers it with pride.

"I was pleased that this mixture had the characteristic smell of urine," he says of his creation, one of several synthetic scents designed to attract female coyotes. The rest of the samples "run the gamut from being fishy to chemical smelling," he adds. One had a scent reminiscent of cured salami, so he and his colleagues jokingly named it "Salomé."

The synthetic stenches that Kimball has created in his lab would hardly pass muster with the perfumers in Paris, but in the animal world it's a different story. Wild creatures are driven wild by a variety of fragrances, some of which are repugnant to humans, and others so subtle that we can't even detect them. A small group of scientists such as Kimball are on the vanguard of this reeking animal research.

"We're just in the beginning stages of understanding how scents influence the behavior of wild animals, and applying that knowledge to practical uses," says Charles Wysocki, a researcher at the Monell Chemical Senses Center in Philadelphia.

Much of the communication that takes place between creatures--from the lowliest worm to the smartest human--is through scent. "The sense of smell is very ancient, so animals of all kinds have it," says Wysocki. "In its absence, everything pretty much goes to pot."

Scientists refer to this sensory process as "chemical signaling," because all odors are basically chemical compounds that waft through the air or drift through the water and end up on tissues in the nose or on other odor-sensing organs. There, the odors bind to receptors on nerve endings, which in turn send signals to the brain, which interprets and categorizes the smells. 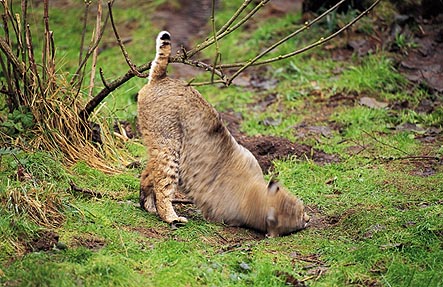 MAKING A STINK: A bobcat leaves a message for other creatures by rubbing its facial scent glands on the ground. From such markings, animals can tell the age, gender and reproductive status of other creatures, and even learn what they've eaten last.


What kind of data do these chemical signals convey? Everything from the basic "this is food" to "an enemy is nearby" to "this is my territory" to "come hither." Male wandering spiders in Costa Rica, for example, follow the subtle scent left on silk by their female counterparts. Ocean-going salmon find their way back to their ancestral rivers by tracking the distinctive aroma of their home waters. Snakes follow dying prey across the ground by odor.

Most mammals have about 1,000 genes that are responsible for the development of their olfactory systems. (Humans have only about a third of the active genes governing the olfactory system that other mammals have.) As a result, some mammals can pick out as many as 500,000 different odors, says Wysocki. "A mammal's sense of smell is so keen, it can pick up from smell alone the age, sex and health status [of another individual], even the identity of the animal," he says.

In the past few decades, scientists have been trying to exploit animals' keen sense of smell in order to control their behavior. Most research has focused on insects--in part because they're easier to study, and in part because there is a large market for pesticides. Work on wild mammals has lagged behind, says Dietland Muller-Schwarze, a researcher at the State University of New York-Syracuse. "It's tough developing practical applications for vertebrates. They're much smarter and more complicated than insects."

But scientists such as Kimball and his colleagues at the National Wildlife Research Center are trying to change that. The center, part of the U.S. Department of Agriculture (USDA), is charged with finding ways to minimize conflicts between wild creatures and humans. In the past, USDA mostly used lethal means to meet these goals. Today, it is looking for alternative methods.

In their search for ways to control coyote predation on livestock, USDA scientists are studying methods of controlling coyote reproduction. Kimball and his colleagues think that contraceptive vaccines, although controversial and unproven, are one possibility. But how do you dispense vaccines to roaming wild animals?

The answer, USDA scientists hope, is to lure them to contraceptive-delivering traps baited with an attractive smell. The scientists started their work by analyzing several different types of commercial predator lures. These lures, used by hunters and trappers, are usually mixtures of animal organs, blood, urine and rotted meats. Kimball took 33 of these lures and ran them through a series of devices in his lab, which gave him a chemical breakdown of the odorous components (nearly 300 in all). He narrowed that list to 17 compounds. Next, using chemicals in his lab, he produced seven distinct mixtures based on these compounds.

Kimball drove the smelly samples out to a USDA lab in Logan, Utah, to test them on captive coyotes. To his surprise, it wasn't one of the earthier or fishier scents that was most effective in attracting the canids' attention. It was the more artificial-smelling Lure Number Two. "I thought it was too chemical smelling," he recalls. "That's where you have preconceived notions that prove wrong."

The chemist and his colleagues at the research center hope to refine Number Two and develop it into an effective coyote attractant in the future. In the meantime, they are investigating other potential perfumes--Eau de Dead Mouse, for example, for the discriminating brown tree snake. Brown tree snakes, introduced accidentally to the Pacific island of Guam after World War II, have decimated native birds there. The snakes also like to eat mice, and mice have been used as bait to trap and kill the reptiles.

The problem with using real mice for bait is that it's expensive and labor-intensive. A mouse fragrance would be much cheaper and easier to use. But it can't be just any mouse perfume. "We found that with the odor of live mice, you need movement, too, to attract the snakes," says Kimball's colleague Larry Clark. The stink of dead mice doesn't have the same limitation. So Kimball is trying to "deconstruct" the odor of dead mouse and synthesize a substitute.

At the Fort Collins center and elsewhere, researchers are also working on substances that may keep mountain beavers from chewing on valuable trees in commercial plantations in the Northwest, and on aromas based on fox urine that may repel pesky rodents. Scientists from the San Diego Zoo have also recently discovered that the odor of an ovulating female panda increases the male panda's libido--a finding that could lead to scent-based cures for the endangered mammal's poor captive-breeding record.

But few of these efforts have borne fruit. Part of the reason, experts say, is that chemical ecology is a relatively new field with few practitioners. Across the country, Muller-Schwarze points out, there are probably no more than a dozen people working on practical applications of wildlife and smell. "The field has great potential for practical application, but it doesn't receive enough attention or money," he says.

The positive aspect of this, Kimball notes, is that his work is unique. "I've created a niche for myself," he says, smiling. Just don't refer to his creations as "love potions" for wildlife, as some press accounts have. They are "chemical attractants," the scientist says, and besides, they are just part of his research. "The big picture is, can we take advantage of the role chemicals play in animal behavior?"

Senior editor Mark Cheater followed the trail of this story to Colorado.