When Research Is a Snow Job 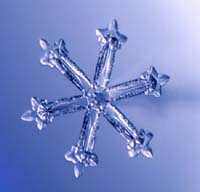 CRYSTAL CLEAR: This six-armed dendrite is just one of four general shapes common to snow crystals. Researchers are discovering a wealth of new information on crystal structure and formation, including practical applications in everything from agriculture to avalanche prediction.

THE FIGURE is beyond comprehension: Every year, 1,000,000,000,000,000,000,000,000 (1 septillion) snowflakes fall worldwide. And due to a snow crystal's sensitivity to changes in temperature and humidity, the odds are slim that any two flakes are exactly identical. As the crystals fall, they encounter different atmospheric conditions that produce flakes with unique attributes. The more complex those conditions are, the more elaborate the crystals. This complicated process, notes Kenneth Libbrecht, "is what makes a well-formed snow crystal especially beautiful."

A physicist at the California Institute of Technology, Libbrecht knows what he is talking about. Along with the work of scientists at the U.S. Department of Agriculture's Agricultural Research Service (ARS), his research is uncovering new information about the magical world of snow crystals--information that has practical applications in such diverse areas as agriculture and the production of electricity.

The first detailed research of snowflakes dates back to the 1600s, when scientist Johannes Kepler recorded his observations of complex crystal shapes. But widespread public fascination with crystals really began with the work of Wilson Bentley, a Vermont farmer who became known as the "Snowflake Man." Bentley produced the first snowflake photomicrographs in 1885--2,500 of which are found in his book Snow Crystals. "Bentley concentrated on the pretty, symmetrical dendrites," says William Wergin, a retired ARS research biologist. "As a result of his book, people think that's what snowflakes look like. They don't realize that they also come in columns and plates." And, in fact, needles.

Snow crystals are individual crystals--usually in a hexagonal form--while snowflakes are collections of one or more snow crystals. Beginning as condensed water vapor, a crystal typically grows around a nucleus of dust. Its shape depends on how the six side facets--or faces--grow in relation to the top and bottom facets. If they grow relatively tall, the crystal appears columnlike; if the side facets are short compared to the length of the bottom and top facets, the crystal looks platelike.

Libbrecht's snow crystal research started as a passing interest. "I began reading about snow crystals and realized that there are some good unsolved puzzles in ice," he recalls. Currently the physicist is trying to crack the problem of why the crystal facets' growth varies with temperature. He believes this may have something to do with the ice surface's "quasi-liquid" layer, which affects how water molecules stick to the surface. "The thickness of the layer depends on temperature and at which facet you look at," he says.

By manipulating the temperature and humidity within an incubation chamber (and by adding an electric current or various gases at times), Libbrecht creates "designer" snowflakes in his lab. Such experiments are helping him determine how crystals form.

Wergin's work with snow crystals also began unintentionally. Several years ago, he and a colleague, Eric Erbe, were using scanning electron microscopy to look at biological problems relating to agriculture. To avoid the laborious procedure that using such equipment usually entails, the two scientists decided to freeze the tissue they were working with and look at it in the frozen state.

"One day it happened to be snowing," says Wergin, "and we were looking for a specimen. We imaged some snowflakes and were very surprised to see what we did." It was the first time anyone had attempted to image snow crystals with scanning electron microscopy, which provides precise detail about the crystals' shape, structural features and metamorphosed conditions (crystals often change once on the ground depending on the surrounding environment).

Wergin and Erbe admit that their initial discoveries were more fun than work. "At first," Wergin recalls, "we were scared that an administrator would come by and ask 'Why are you wasting your efforts on imaging snowflakes?'" But when he called another ARS colleague, Albert Rango, to see if the snow crystal magnifications had any applications for his research, the hydrologist came right over.

Rango uses Wergin's electron microscopy data, along with microwave satellite data, in the Snowmelt Runoff Model to predict the amount of water available in a winter snowpack. For western states such as Colorado, Montana, Utah and Wyoming, about 75 percent of the annual water supply comes from snowmelt. Snowmelt water is critical to crop irrigation and hydroelectric power, as well as recreation and domestic water supplies, fisheries management and flood control.

Before employing the scanning electron microscopy results, the forecasted amounts of snowpack water were inaccurate whenever the size and shape of the snow crystals varied much from the norm. "The more we know about crystals," notes Rango, "the easier it will be to use microwave satellite data for predictions of the snow water equivalent."

Currently, forecasts using the model are about 90 percent accurate, but Rango would like to improve this figure with further developments in remote sensing. "A change from 90 percent to 92 percent is important because in the West, water is overcommitted." For instance, a 1980 study estimated that improving the prediction by 1 percent would save $38 million in irrigation and hydropower in the western United States. Rango adds: "I would expect that these figures are higher than that now, especially seeing that the water demand is now greater."

The hydrologist is also looking ahead at climate change predictions. "Following the estimates that have been made about what will happen by 2100, things are definitely warming up," he says. Temperature increases will likely result in a reduction in stream flow as overall snow accumulation decreases, winter precipitation runs off as rain and water evaporates at a quicker rate. The gap between water supply and demand will magnify even more, greatly increasing water's economic value, anticipates Rango.

Not only does the crystal research help gage snowmelt, it is also useful in predicting avalanches, designing artificial snow and, perhaps in the near future, examining air pollution. "You can put snow in a scanning electron microscope and tell which elements are present, such as sulfur and nitrogen," says Wergin. "You can then see what kind of pollution is in the area and possibly track the source."

You don't have be a scientist, however, to appreciate the detailed structures of snow crystals. "My advice to people," says Libbrecht, "is to go outside and look at these things with a magnifying glass. On a good day, you can see some fun stuff. Photographs just don't do them justice."

Sarah Boyle is an associate editor of this magazine.