They prickle and poke the unwary, but cacti supply vital food, water and shelter to a wealth of desert animal species 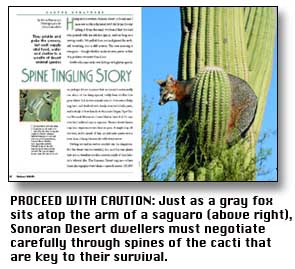 Hiking in the western Arizona desert, a friend and I once saw a white-throated swift fall from the sky. Lifting it from the sand, we found that the bird was pierced with six delicate spines, each as long as a sewing needle. We pulled them out and placed the swift, still breathing, into a cliff crevice. The next morning it was gone--though whether under its own power or that of a predator we never found out.

Swifts whiz narrowly over hilltops at highway speeds, so perhaps it's no surprise that one would occasionally run afoul of the sharp-spined, teddy-bear chollas that grow there. But slower animals also do: I've seen a fledgling barn owl studded with firmly attached cholla parts, and a study of tree lizards at Arizona's Organ Pipe Cactus National Monument found that at least 4 of 61 reptiles had suffered cactus injuries. Novice desert hikers may also experience cacti first as pain. A single step off the trail, and a passel of tiny, prickly-pear spines are in your shin, itching ferociously with every move.

Getting around in cactus country can be dangerous. But the desert can be beautiful, too, and the very plants that are so treacherous also nourish much of this habitat's vibrant life. The Sonoran Desert region--where these photographs were taken--sprawls across 100,000 square miles of Arizona, California and northwestern Mexico and houses some 300 cactus species. Desert animals, from the tiniest insects to the largest mammals, depend directly on these plants--as larders, water sources, even homes. Indeed, many of these creatures could not survive here at all without cacti, while some of the plants, in turn, could not thrive without help from particular insects, birds and mammals. 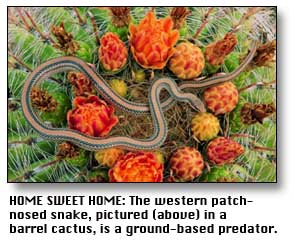 Worldwide, there are roughly 1,800 cactus species, all but one of them--a mistletoe cactus found in Madagascar, Sri Lanka and parts of Africa--native to the New World. Though the plants are not strictly desert dwellers, no place is as defined and shaped by cacti as the Sonoran, from ankle-high fishhooks to towering saguaros, the most distinctive cactus species of all.

With its long, curved arms reaching up toward the sky, the saguaro is southern Arizona's signature plant, appearing on countless real-estate brochures and postcards. While only a few saguaros live to adulthood--most seedlings fall victim to hungry animals, cattle grazing, urban sprawl and even cactus "poaching" for home gardens--those that do may survive two centuries and grow to heights of 40 feet or more. The biggest known saguaro was 78 feet tall.

A variety of bird species use these mature cacti to construct safe and comfortable homes. Gila woodpeckers and gilded flickers, for instance, hammer open saguaros, then build nests inside them. Their gourd-shaped nests are truly water-cooled--insulated from heat by the 90 percent of cactus flesh that consists of water. Most birds enhance this natural air-conditioning by orienting cavity openings to the northwest to avoid direct sunlight and perhaps to take advantage of cooling breezes as well.

After the woodpeckers depart, owls, flycatchers, purple martins and bats move into the abandoned cavities. Red-tailed and Harris' hawks, meanwhile, build nests of sticks on branching arms outside the holes. I've seen three different kinds of birds--flickers, woodpeckers and owls--all nesting in a single condominium cactus.

Even apparently inhospitable cacti can make good homes. Several birds, from house finches to roadrunners, build their nests within prickly pear cacti as well as in phenomenally spiny teddy-bear and chain-fruit chollas. Growing in waist-high to head-high clumps of densely packed stems--cylindrical in the case of chollas, pancake-flat in prickly pears--these cacti keep nesting and roosting birds safe from most predators. The cholla's long, whitish spines even provide shade, lowering the temperature of the plant's stem as much as 20 degrees F on a 110-degree-F day.

But cacti provide desert animals far more than a safe abode: Every cactus creates its own oasis. The sprawling, shallow roots of a saguaro, for example, quickly absorb water from even the lightest rains. Succulent stem tissues hoard this liquid, while a waxy coating retards its evaporation. Dubbed the "cactus camel of Arizona" by pioneering early-twentieth-century ecologist Forrest Shreve, a saguaro visibly swells and shrinks with wet and dry seasons. Animals cash in on this bounty when they eat the plant's moisture-filled fruits. "Usually, there is no rain at all when these fruits ripen," says University of New Mexico biologist Blair Wolf, "but here are all these little Gatorade bottles sitting right on top of the cactus." 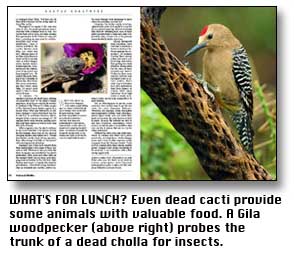 Throughout the saguaro's life, and even after it dies, the plant provisions desert creatures with abundant food as well. The cactus starts out as a tiny, succulent seedling that germinates in the shade of mesquite trees, providing an easy meal for rabbits, woodrats and other herbivores. Once it reaches adulthood, the cactus blooms each May, dry years and wet, offering meals of protein-rich pollen and sweet nectar to animals such as white-winged doves, hooded orioles, hummingbirds, bees, moths and the seldom-seen long-nosed and long-tongued bats. Biologist Theodore Fleming of the University of Miami has discovered that some nectar-feeding bats travel more than 50 miles each night to feed on these cactus flowers.

In summer, the saguaro's luscious, red fruits ripen, offering an irresistible feast to the plant's hungry neighbors, from brown-crested flycatchers to javelinas to the Tohono O'odham people of the Arizona-Sonora border region. In a recent study, Wolf and University of Arizona biologist Carlos Martinez del Rio found that in southern Arizona, white-winged doves consume an average of 128 saguaro fruits each summer, gaining more than half their calories as well as more than five pints of water.

After a saguaro dies, the plant continues to aid desert dwellers. One species of fruit fly, for example, feeds only on the juices of decaying saguaro and cardon cacti. Though tree lizards rarely climb living saguaros, they often forage fruitfully on the plants' still-standing woody skeletons. Saguaros and other cacti benefit from their relationships with many of these animals as well. The insects, bats and birds that feast on saguaro are essential for the plant's pollination. After doves and other birds eat the saguaro's fruit, they fly away, later dropping seeds embedded in the fruit from their treetop nests down to shaded sites ideal for germination. Other fruit-loving creatures, such as woodrats and coyotes, scatter cactus seeds through their droppings to spots where the seedlings can take root.

Likewise, the cholla's easily detached, spine-studded joints stick readily to a coyote's fur or a person's pant leg. When it eventually falls from its unwilling host, each of these joints can sprout into a brand new plant. Dispersal by pain, it turns out, is the primary means by which chollas reproduce.

Indeed, throughout their evolution, cacti have had to maintain a delicate balance between gaining the assistance of animals (having them spread pollen and seeds) and protecting themselves from getting too much attention (being eaten for the sake of their nutrients and water). It's fine for those neon-colored flowers and succulent fruits to attract notice; that's what they're intended to do. But cacti defend their flesh. Spines, of course, deter many herbivores. So do high levels of oxalic acid, which make cactus pulp indigestible to most animals.

Yet, as often happens in nature, some creatures have evolved ways to get around even the most fearsome defenses. Woodrats, for example, house specialized microorganisms within their intestines, which digest oxalic acid and allow their hosts to consume the juicy insides of cholla joints. Because the animals are able to use this otherwise unavailable water source, woodrats gain a competitive edge and can live in places that are too dry for other herbivores.

Without the water, food and shelter provided by chollas and other cacti, most woodrats, woodpeckers, white-winged doves and a host of other creatures would disappear from the Sonoran Desert. Think of it as a lesson from these prickly, painful plants: Danger is not always something to be avoided; it can sometimes offer a life-saving opportunity.