The Rise of the Dormouse 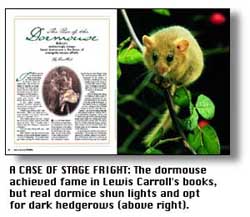 THE DORMOUSE in Patrick James' hand is not living up to its reputation. It doesn't seem to appreciate that it has an image to uphold, an image cemented 135 years ago by Lewis Carroll in the famous tea-party scene in Alice's Adventures in Wonderland:

"Then you should say what you mean," the March Hare went on.

"You might just as well say," added the Dormouse, which seemed to be talking in its sleep, "that - I breathe when I sleep' is the same thing as - I sleep when I breathe'!"

"It is the same thing with you," said the Hatter.

With Carroll's help the dormouse has become, as one conservationist phrased it, "an icon of sleepiness." To conserve energy, it sleeps during the winter, sleeps during the day and even sleeps during the summer hours when it is supposed to be awake, if weather conditions or food supply are poor. Its torpor is so sound that when it is handled, it struggles neither to fight nor to flee but simply to return to its slumber.

But the dormouse James is holding is wide awake. It squeals and pumps its tiny feet frantically as he pinches it by the scruff of its neck. It has taken James, an ecologist, and his colleague Gen O'Farrell nearly an hour to find this dormouse - an hour of wading through ankle-high bramble in Tunbury Wood in southeastern England. James and O'Farrell have spent the morning peeking inside more than two dozen nest boxes conservationists erected with the hope that one of these allegedly sleepy creatures (the mouse's name derives from the French word dormir, meaning "to sleep") would bed down.

A reputation for docility does have its advantages. The dormouse's dwindling numbers in Britain earned it the protection of European laws and a place in an English conservation group's endangered species recovery program. And its gentle nature, cuddly appearance and literary fame garnered public support for efforts to protect it. So when the government decided to cut a swath of Tunbury and some adjacent woods to expand a major highway, it took the trouble to ensure that the dormice - and part of the forest itself - were both moved to new locations nearby.

James and O'Farrell work for Cresswell Associates, an environmental consultancy that was hired to monitor the move. They are here to see how the dormice are getting along in their new home. As he stills the dormouse's quivering long enough to examine it, James makes a surprising discovery. "It's lactating," he says. 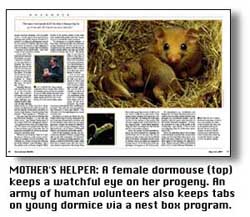 Suddenly this routine inspection takes on an air of excitement. The rodent's nocturnal habits and its small population make sightings rare. Finding adults is difficult enough. Finding babies would be nearly miraculous. James reaches into the box and pulls out a nest. Inside the carefully woven leaves and fibers is a cluster of five hairless, thumb-tip-sized baby dormice. "They're gorgeous," O'Farrell coos.

Few mice enjoy the kind of affection that the dormouse inspires. "It's not like any other mouse," says Valerie Keeble, head of the People's Trust for Endangered Species. "It's a golden-brown color, and it has a furry tail. The reason most people don't like mice is because they've got slimy tails. But the dormouse is beautiful. It's got lovely big dark eyes and is not slimy at all."

The dormouse in James' hand is a hazel dormouse, Britain's only native species. There are roughly 500,000 in Britain, concentrated in a swath of land that stretches across the southern coast of England, with a few patches in the north and along the Welsh border. It has several cousins on the continent, including the edible dormouse, the garden dormouse and the forest dormouse.

The dormouse is a delicate creature - a fussy eater, reluctant traveler and a discriminating homemaker. It turns up its nose at common foods like leaves and will only eat certain flowers, fruits, nuts and insects that it finds in treetops and shrubs. The advantage to such finicky tastes is that there is less competition for these foods than there is for grass and leaves. The disadvantage is the dormouse needs a habitat with a diversity of plant and insect species to survive.

Add to that the dormouse's territoriality and you have a species in which each member has to stake out a relatively large patch of land. Generally dormice live at densities of only about 2 to 3 adults per acre. The population of the bank vole, a similarly sized rodent, often exceeds 50 per acre. Dormice are made even more vulnerable by their unwillingness to travel. They will not cross open ground, like farmland, to reach new habitat. They will only move through hedgerows, woods or other cover.

But there is at least one threat the dormouse doesn't need to worry much about. Its nocturnal and arboreal habits combined with its low densities mean that it has no major predators. Dormice are simply too difficult to find to be useful prey, according to Tony Mitchell-Jones, an ecologist with English Nature, a government conservation agency.

Prior to the twentieth century, the dormouse was plentiful in Britain, happily living side by side with humankind. For hundreds of years, woodsmen in Britain practiced coppicing, a method of harvesting timber. Hazel trees were chopped down and new shoots were allowed to grow from the stump. Every four or five years these shoots would be cut and used to build fences and houses. Coppicing created clearings that supported a variety of plant life. The dormouse could enjoy the food in the treetops of the sections that were not coppiced and on the forest floor of the coppiced parts - particularly hazelnuts. They also liked the hedgerows that farmers planted to fence their property.

But in this century, as other materials replaced the wood harvested by coppicing, the practice died out. At the same time the expansion of cities, towns and farms nibbled away at the forest, breaking it up into smaller patches. Fields got larger and hedgerows became scarcer. As its home and food supply began to disappear, so did the dormouse.


Its dependence on woodlands and hedgerows has turned the dormouse into a symbol of an era when Britain's forests were managed in a sustainable fashion. And its fragility makes it a good early indicator of the decline of ancient woodlands. "Dormice are indicative in a way of the health of the countryside," says Keeble. "If the dormice are doing okay, then lots of the other species will be, too."

If you can find them, that is. For decades, conservationists suspected that dormice were dying out, but they didn't have proof. Animals that sleep during the day and spend their nights in the treetops are difficult to study. Then in the early 1980s, ecologists Pat Morris from Royal Holloway University of London and Don Jefferies of the Nature Conservancy Council, who had failed in their previous efforts to study the elusive dormouse, came across Doug Woods. Woods, a retired butcher and amateur naturalist, had succeeded in catching dormice with a nest box that was essentially a birdhouse mounted outside-in. With the opening facing the tree, there is not enough room for most birds to squeeze in, but plenty of space for the tiny dormouse. Woods was tying the nest boxes to trees all over his home county of Somerset.

Morris and Jefferies invited Woods to join forces with them on a study of the dormouse. "The key to studying them was to get your hands on them," recalls Mitchell-Jones.

In 1993, the dormouse was added to English Nature's endangered species recovery program, a project to help restore threatened plants and animals. But at the time, conservationists still didn't have a comprehensive map of the dormouse's distribution. English Nature decided it was time get some help from the public. So it organized the Great Nut Hunt, asking volunteers across the country to go out into the woods and collect hazelnuts, one of the dormouse's favorite foods. When the dormouse opens a hazelnut, it leaves a distinctive mark around a hole. By searching for nuts that had this mark, conservationists could get some idea of whether dormice were present in a particular area.

The survey was a big success, and helped build public support for dormouse conservation. In 1994, English Nature began to reintroduce dormice to areas where they were once plentiful. So far, captive-bred dormice have been released in seven counties. English Nature also has a national monitoring program in which volunteers check nest boxes to keep tabs on the size of the populations.

Hedgerows are also coming back, according to Mitchell-Jones, thanks to government incentives to farmers to replant these important wildlife covers. And the government, under pressure from environmentalists, has become more careful about protecting ancient woodlands.

So when an old forest inhabited by dormice was threatened by a government plan to widen the M2, part of a network of highways linking London and Dover, the national highways agency decided to move both the habitat and the creatures. In the fall of 1998, the trees were cut down while the dormice hibernated. Meanwhile, the adjacent forest was made more attractive to dormice with the addition of nest boxes, the ones James and O'Farrell would later inspect.

When they awoke, the dormice migrated to the canopy of this neighboring forest. Once they left, 10,000 tons of soil from their forest home - soil rich with seeds as well as microscopic animals - were moved to a new site and young trees native to the area were planted, as well as about 120 mature hazel trees from the old site. The new woodland connects two existing ancient woodlands. In five to seven years' time, when the hazel trees are ready to fruit, conservationists hope this new habitat will be colonized by dormice from the older forests. The whole exercise cost about $2.25 million.

As the centerpiece of several recovery efforts, the dormouse has come a long way from its Alice's Adventures in Wonderland days. It has been transformed from a dim-witted rodent to a brown-eyed, fuzzy-tailed poster-mouse for the environment.

Not bad for an icon of sleepiness.