In a rarely observed phenomenon, beluga whales caught in the Arctic ice encounter a powerful predator 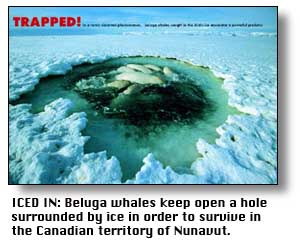 TWO YEARS AGO, a sudden April cold snap formed ice at the mouth of Jones Sound in the Canadian territory of Nunavut, trapping about 50 beluga whales. Unable to breathe long enough to swim under the frozen expanse that separated them from the open sea, the whales had only one hope: to keep open a tiny hole.

Such openings in the ice are called sassats, and only the continual surfacing of the animals keeps them from freezing over. The hole, with its access to fresh air, is a lifeline, but it also becomes a prison: To escape, these whales had to wait until July for the entrapping sea ice to melt. Many starved to death.

Polar bears posed another threat. The Inuit hunter who had first discovered this sassat watched nine polar bears gather around the hole, then about 15 feet across. The bears fed on a number of carcasses they had hauled out onto the ice. One bear had eaten so much that its stomach almost seemed to be dragging on the ground. When I arrived a few days later, most of the surviving belugas had deep rake marks from the bears' claws. 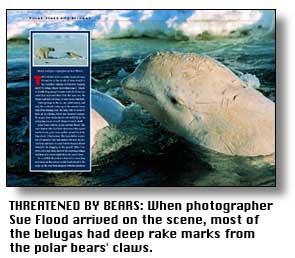 As a wildlife filmmaker interested in recording encounters in the natural world, I had rushed to the scene all the way from England with documentary cameraman Doug Allan. The last five hours, led by Inuit guides, was by snowmobile. We had wanted to photograph this drama between species because it is so rarely observed. Biologists Tony Martin and Tom Smith, who have spent many months studying beluga whales, had never before seen a bear hunting at a sassat, and neither had Ian Stirling, a leading authority on polar bears. According to the Inuit in our group, this was the first time in more than 30 years that anyone had witnessed this behavior.

As my companions and I walked up to the sassat, we could see fresh bear prints in the snow. After barely 20 minutes, a white hulk appeared in the distance. We backed off, and the bear lumbered closer. As it approached, it broke into a trot and launched into the water onto the backs of the belugas. They dove quickly to escape.

Unable to capture new prey, the bear turned to a carcass already on the ice, helped itself to the cornucopia of meat and ambled off. The crimson sign of its meal was emblazoned on its muzzle.

Sue Flood is a producer with the BBC Natural History Unit. She photographed the sassat for The Blue Planet, a television series on the world's oceans, to be aired in the United States later this year. Based on subsequent sightings and a review of distinctive scars, she believes several belugas from the sassat may have survived.