His background is fixing air conditioners and he grew up half a world away, but that hasn't stopped Tilo Nadler from helping some of Asia's rarest primates 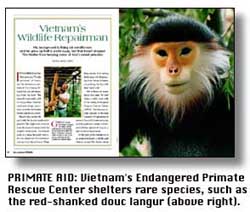 IT'S DAYBREAK in Ninh Binh province, 74 miles southwest of Hanoi, and the limestone mountains of Cuc Phuong National Park are just emerging from the mist. The tranquil countryside, with its rice paddies, thatched roofs and abrupt mountains, looks like the timeless scenery painted on a scroll.

Meanwhile, inside the park itself, the dawn is anything but peaceful. The jungle is full of sound, from the drone of mosquitoes to the laughter of thrushes. The loudest noise is a deep-throated huuuu-huuuu-huuuuuu-huuuuuuuuu coming from the gibbons. These long-armed, fruit-eating lesser apes, fast disappearing from Vietnam's forests, are greeting the day with their "great calls."

But gibbons are easier heard than seen. To view them, a visitor must walk to the nearby Endangered Primate Rescue Center (EPRC). This five-acre facility adjacent to the park contains 100 specimens of some of the world's rarest primates, including gibbons, lorises and several different species of langurs, a type of leaf-eating monkey.

At the helm of this wildlife ark is an anomalous figure: a middle-aged German named Tilo Nadler whose academic background is in air-conditioning engineering. Through a serendipitous route, Nadler founded and runs a program unique in Indochina. Creatures such as the striking, black-and-white Delacour's langur, with an estimated wild population of only 250 individuals, and the Cat Ba Island golden-headed langur, numbering about 120, find a home here. "Tilo is one of the unsung heroes of primate conservation," says Colin Groves, a mammalogist at the Australian National University in Canberra.

Nadler starts his day with a staff strategy session over a breakfast of German sausage and cheese on the center's veranda. Seated at the table are Nguyen Thi Thu Hien, his Vietnamese interpreter and wife, and Roland Mannel, a zookeeper who divides his time between here and Germany's Leipzig Zoo. Nadler is in his late fifties and deeply tanned from a life outdoors. His black hair is starting to fade to white, making him look a bit like a Delacour's langur, as Nguyen gleefully points out.

He talks with his staff in a mixture of English, German and Vietnamese, going over the health of the latest animals dropped off on their doorstep. The conversation centers on a newly arrived langur that looks like it may not survive much longer. They keep mentioning something called kut, which is not in the Vietnamese phrasebook. When asked what it means, there's a pause, and then laughter when Nguyen explains that the word refers to animal dung.

One of the best indicators of an animal's health is the quality of its stools; ultimately, kut can help tell staffers whether they are feeding each species of langur the right varieties of leaves. Getting the proper diet to all the different primates is a major challenge, and staffers must collect more than 200 pounds of fresh leaves from the jungle every day. It can be hard to tell if they've got it right, especially when dealing with new arrivals. The EPRC once had to guess at the diet of a black langur, a species previously known only from a single skin collected in China in 1924.

As a result, the breakfast table is the site of many earthy, informal and pragmatic discussions. These qualities symbolize Nadler's approach, which meshes well with the local culture, say other longtime Western residents of Vietnam. His personality, combined with his familiarity with the Communist system (Nadler was raised in the former East Germany), helps to explain his rapport with the Communist party officials who oversee this country's environmental protection efforts. 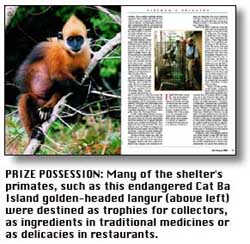 Breakfast finished, Nadler gives a tour of the facility, including its large, shaded, airy pens full of native plants and primates, its clinic and its quarantine center. At one point he gruffly warns a visitor away from the quarantine area not because he worries about humans catching diseases from primates, but the other way around. Overall, this man gives the impression that he would much rather be in the bush, instead of attending to administrative details or public relations.

But Nadler warms up later as he discusses his indirect route to primate biology. "Biology was possible to study only if your parents belonged to the working class and were members of the Communist party," he says. To pursue his interests, he had to learn how to work the system. He got a degree as an air-conditioning engineer, but studied biology in his free time, eventually wangling a job at a biological research institute, doing fieldwork and writing more than 50 scientific papers, a book and a monograph on birds. Nadler accompanied organized expeditions to Antarctica, Mongolia, China, São Tomé and Russia.

In 1991, while visiting Vietnam, he saw a pair of Delacour's langurs in the wild and was swept away. He collected information about the creatures for a German television project, and convinced the Frankfurt Zoological Society to get involved. Two years later, he saved two Delacour's langurs confiscated at a meat market, and the EPRC was on its way. "It was not my work, not my profession, but what else could I do?" he says.

Located between village and park, the center acts as a temporary ark for endangered animals that have been seized from smugglers, hunters and black marketeers. Most of the creatures were destined as trophies for collectors, for use in traditional medicines in China or as delicacies in the specialty restaurants that have sprung up in Vietnam recently. ("The brains are the best part," Nguyen says.)

Prior to the EPRC's existence, these animals had faced uncertain prospects - even if rescued by authorities. The langurs in particular had a tough time. These long-tailed primates - which range in size from 7 to 46 pounds, depending on the species - prefer the leaves, seeds and unripe fruit of trees that grow in limestone-rich environments, and they have specialized stomachs containing bacteria able to break down only these materials. If fed the wrong thing - such as ripe fruit - they quickly become ill and die. Consequently, Vietnam's zoos did not have the ability to care for them, and few survived shipment outside the country. Most confiscated langurs were simply dumped in the nearest park, regardless of their place of origin.

Nadler's facility provides an alternative, nursing primates back to health in a small patch of natural environment free of poachers. From a single cage and a pair of langurs, the center has grown to include ten acres of land (including two semi-wild enclosures), 12 keepers, a veterinarian, a biologist and a quarantine station with a veterinary clinic. Its sponsors include Vietnam's government, the San Diego Zoo, Australia's Melbourne Zoo and Germany's Allwetterzoo Munster, among others. All these institutions provide advice and some financial help, but a large part of the EPRC's aid comes in the form of donated labor from visiting volunteers. Nadler has a gift for enlisting the help of outsiders: An electric fence company donated the enclosure for the gibbons, and a German electrician came to Vietnam at his own expense to spend three weeks installing it. 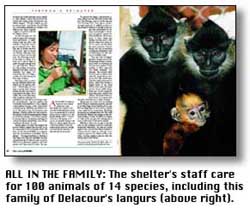 Defying the odds (some langurs suffered such severe injuries to their tails that these appendages had to be cut off), the center has managed to keep 14 rare species alive for eventual reintroduction to their home environments. Six species that call this center home are found nowhere else in captivity. And Nadler's center has recorded the world's first captive births of Delacour's and Hatinh langurs. "Tilo has chalked up quite an achievement," says Groves. He adds that the conservation situation in Vietnam is so critical that these langurs "might not survive at all but for Nadler's efforts."

As time has gone on, the center's goals have become more ambitious. At first, Nadler and his staff just wanted to keep the endangered animals alive. Now they aim to return creatures to the wild. They've started out slowly, releasing a few radio-collared lorises last year. But returning animals to the wild is a tricky business, as it can be hard to match the right animals with the right habitat. There's also the problem of releasing animals that have been in captivity too long - it's something like throwing a poodle out to live among the wild dogs of Africa.

Focusing solely on rescuing and breeding captive animals is not the answer, however. "Technically, you can keep a species alive through saving genetic material or even captive breeding, but in reality this is nothing more than operating a life support machine for a body that can no longer operate independently," says Joe Walston, the Cambodia representative of the Wildlife Conservation Society, a New York-based nonprofit group. While he says Nadler's center is "the major hope" for Vietnam's rare primates, Walston points out that conservation should be about maintaining the integrity of natural systems. "It is these complex landscapes that we should be protecting, not merely identifying and bottling a few of their constituent elements," he says.

Nadler agrees but feels that langurs are in such extreme danger that arks such as his are a necessity for the immediate future. He does not see rescue facilities as a replacement for conservation of habitats, but an adjunct. "The biggest problem in Vietnam is that there is no time for education on environmental issues. It takes 20 years to see the effects of an education program, and these species don't have even 10 years," he says.

To address the larger conservation issues, Nadler and his staff work closely with Dao Van Khuong, director of the adjacent Cuc Phuong Park. Dao takes a multi-pronged approach to wildlife protection, one prong of which is to provide local people with alternatives to cutting down jungles or hunting endangered species for their livelihoods. With Dao's help, a deer farm has opened on the park's outskirts, where the horns of Cervus nipon are harvested for use in medicine. Park officials are also promoting sustainable alternatives such as beekeeping and the raising of minklike civets.

Dao says that the biggest problem the park faces is the burgeoning human population, which is consuming all the resources needed by the wildlife. In 1962, when Ho Chi Minh founded Cuc Phuong the country's first national park there were only 500 people living nearby, and the only visitors were scientists and government officials. When Dao became a ranger here in the early 1970s, there were still tigers around. As of a 1998 survey, there were 51,000 people living in the region, and 60,000 visitors. The result is that deforestation is creeping into the park. And there are no tigers anymore.

Nadler and his center can't do anything about Vietnam's population growth, especially on their budget of less than $20,000 a year. But one thing they can do is create a climate more conducive to conservation. By linking zookeepers and biologists from the West with government officials and citizens in this formerly isolated country, the EPRC is helping to build skills and give the Vietnamese a sense of the value of their native wildlife.

Will these efforts be enough to halt the slide of rare primates such as Delacour's langur into extinction? The odds are clearly against their survival. But Nadler believes it is important to make an attempt. And, thanks in part to the efforts of this erstwhile German engineer and his staff, the kut has not yet hit the fan.