Why Birders Love the Blues 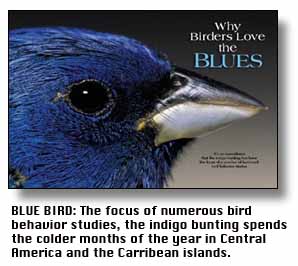 Oh my, the song of the indigo bunting, the bluest of all our blue birds. As sweet and variable as a lick from Benny Goodman's clarinet, it swirls from dawn to dusk, from May to September, over the thickets and overgrown pastures of eastern North America. There, this little finch settles in to raise a brood or two before returning to tropical climes.

Edward Howe Forbush, a famous New England ornithologist in the early twentieth century, effused: "The male seems to delight in singing during the hottest part of the summer days, when other birds are resting in the shade. He will sing his way from the bottom of a tree to the top, going up branch by branch until he has reached the topmost spire, and there, fully exposed to the blazing sun, he will sing and sing and sing."

Indeed! A male indigo bunting will utter as many as 680 songs an hour if he's looking for a mate. That's one amazing fact gleaned from an impressive number of scientific papers that focused specifically on the species' song. Another: A young male settling on a breeding territory for the first time doesn't sing his father's song, like most songbirds; instead, he copies his new neighbors.

Few birds, in fact, have had their songs scrutinized as thoroughly as this abundant, popular Neotropical migrant, always a showstopper for birders on midsummer field trips. But the indigo bunting was also the star of a landmark experiment showing that young birds learn the constellations in the northern sky in order to orient themselves on their first night flight to southern wintering places. Then there were studies of indigo bunting breeding behavior and genetics; the results suggested that infidelity might be widespread among avifauna long assumed to be faithfully monogamous. 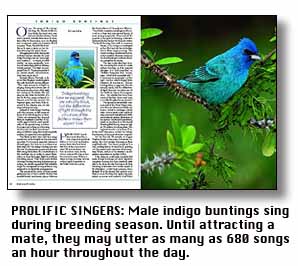 The species at the center of these investigations is one of four colorful finches that inhabit brushy and weedy places between the borderlands of Canada and Mexico. These birds comprise a small genus (Passerina) in a huge and widespread family of seed-eating songbirds. Gaudiest of the quartet is the painted bunting, a favorite backyard feeder bird in the Sunbelt states. The lazuli bunting, blue with a cinnamon breast, is the indigo's counterpart in the West and the two hybridize where their ranges overlap. The varied bunting, a multihued but secretive resident of desert washes in the Southwest and northern Mexico, completes the group.

The bird books also have trouble conveying the color of a male indigo bunting in full nuptial plumage. Is it "rich deep blue" or "brilliant turquoise blue" or perhaps "cobalt with a purplish cast"? It depends in large part on the light. As the ornithologist John Farrand, Jr. explained, "Indigo buntings have no pigment; they are actually black, but the diffraction of light through the structure of the feathers makes them appear blue." (In winter, the male loses much of his blue sheen and looks more like the plain brown female.)

The species is remarkably common east of the Great Plains wherever there are abandoned fields, old burns, shrubby swamps, forest edge, cutover lands, utility rights-of-way, unmowed roadsides and little-used railroad grades. Estimates of the species' continental population, based on numbers from the annual Breeding Bird Survey, range as high as 40 million breeding pairs. The highest counts come from Kentucky and Tennessee, where the indigo bunting may be the most abundant songbird.

Yet as Cornell University ecologist Stephen Emlen notes, many birders are unaware they have indigo buntings in their neighborhoods. "I've turned people on to a very exciting bird in 30 seconds by pointing out the paired note structure of its song," says Emlen, author of the research on migration orientation in the late 1960s.

A lay observer could easily conclude that male indigo buntings are such vigorous songsters because they have relatively little else to do from the day they arrive at their breeding territories--two weeks ahead of the females--until their progeny have fledged. It is the female that spends more than a week building the open-cup nest, which is woven into a shrub 2 or 3 feet from the ground. It is the female that incubates the three or four eggs and mobs predators near the nest. And it is the female that crams insects and spiders into the throats of the hungry nestlings.

The male may finally enter the picture a few days after the young birds leave the nest, taking over their custody so his mate can start another brood. "Such relief from caring for fledged young may be the male's main direct contribution to the breeding success of the female in his territory," relates Robert B. Payne, curator of birds at the University of Michigan Museum of Zoology who has led studies of buntings since 1978.

But there is also the risk that his mate will fly off with another partner while he is busy with the fledglings. Payne found that 11 percent of paired females moved in with a male on a different territory after the first nesting. Some females, he noted, nest with three different males in a season, and some males have two or more females under their wings at the same time.

Moreover, if a male indigo bunting assumes care of the fledglings, it's likely that some of them will not be his own progeny. Payne reported that female buntings often solicit copulation from males in neighboring territories during the nest-building phase. And the real extent of what scientists call "extra-pair copulations" was revealed in the late 1980s by David Westneat, a University of Kentucky biologist who used DNA fingerprinting to study those southern Michigan indigo buntings. He discovered that 20 to 40 percent of the young are fathered by males that are not the female's mate.

"Westneat's work was mind-blowing," says Emlen. "Since then, we've found serious hanky-panky in all kinds of birds." 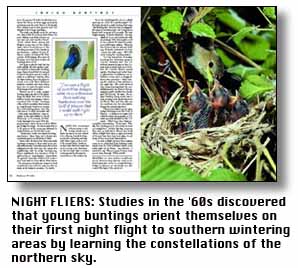 Payne also detailed how first-year male buntings returning to their natal areas usually settle several territories away from their original nest site and copy the songs of a neighboring male. An indigo bunting song, Payne explained, is a sequence of six to eight notes, or "song figures," chosen from the species' repertoire of about 100 notes--and there are no rules about their order. "The sequences of notes are unique to local neighborhoods [which] may involve as many as 22 males in a season," he wrote.

As to the indefatigability of our colbalt crooner, in 1932 the ornithologist T.S. Roberts clocked a male bunting that sang "the livelong day" from the top of a flagpole. Its song, he recorded, was "just 4 seconds in length with intervals of 6 seconds. The bird began singing," Roberts observed, "very regularly at 4 a.m. and continued with surprisingly little interruption until 8 p.m.--about the time the whippoor-wills began calling." Allowing four hours a day for rest and feeding, Roberts estimated the bird "tuned his little pipe" 263,520 times during the breeding season.

The fall departure of indigo buntings for wintering areas in Central America and the Ca-ribbean islands begins in late August and extends well into October. At Cornell, Emlen raised captive buntings and tested them in planetarium conditions--an inflatable dome with a stripped-down star projector--while varying the rotation of star patterns in the night sky. "My work showed that young buntings learn the constellations and use them to find geographic north just like Boy Scouts and Girl Scouts," he says. "An indigo bunting flying south has to keep looking over its shoulder for the North Star, and they also use the northern sky for orientation during the spring migration."

That journey takes a great many indigo buntings over the Gulf of Mexico--a distance of nearly 500 miles between launchpads in Yucatan and first landfall on the U.S. coast. "What these tiny birds accomplish is astonishing," Emlen says. "Usually the buntings cover 250 miles at most on a single hop." But for this trip, he notes, they tank up with fat in Mexico and head off on a flight that takes a night and most of the next day. And there's no place to put down if they encounter bad weather.

"I've seen a flight of pure-blue indigos come in so exhausted from battling headwinds over the Gulf of Mexico that I could walk right up to them," says Emlen. "I wanted to say, ‘Hey you guys, I know what you've been through.' What a thrill."

Field Editor Les Line declines to elaborate on an embarrassing episode early in his bird-finding days when he misidentified an indigo bunting as an extremely rare (for central Michigan) blue grosbeak.