They may breed like...well, rabbits...but not all cottontails species across the country are thriving 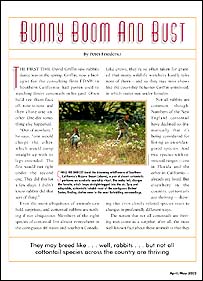 THE FIRST TIME David Griffin saw rabbits dance was in the spring. Griffin, now a biologist for the consulting firm EDAW in Southern California, had gotten used to watching desert cottontails in his yard. Often he'd see them face off, nose to nose, and then chase one another. One day something else happened.

"Out of nowhere," he says, "one would charge the other, which would jump straight up with its legs extended. The first would run right under the second one. They did this for a few days. I didn't know rabbits did that sort of thing."

Even the most ubiquitous of animals can hold surprises, and cottontail rabbits are nothing if not ubiquitous. Members of the eight species of cottontail live almost everywhere in the contiguous 48 states and southern Canada. Like crows, they're so often taken for granted that many wildlife watchers hardly take note of them--and so they may miss shows like the courtship behavior Griffin witnessed, in which males run under females.

Not all rabbits are common, though. Numbers of the New England cottontail have declined so dramatically that it's being considered for listing as an endangered species. And two species with restricted ranges--one in Florida and the other in California--already are listed. But elsewhere in the country, cottontails are thriving--showing that even closely related species react to changes in profoundly different ways. 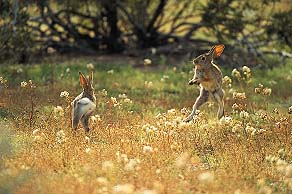 Photo: © DAVID GRIFFIN
SHALL WE DANCE? Amid the blooming wildflowers of Southern California's Mojave Desert (left), a pair of desert cottontails performs an acrobatic courtship ritual. The male, left, charges the female, which leaps straight-legged into the air. Spry and adaptable, cottontails inhabit most of the contiguous United States, finding shelter even in the most forbidding surroundings.

The notion that not all cottontails are thriving may come as a surprise; after all, the most well-known fact about these animals is that they breed like, well, rabbits. "The reproductive capacity of rabbits is pretty high," says wildlife ecologist Phil Mankin of the University of Illinois. "They can mate within days of giving birth, and the young can reproduce within six months."

Most species of cottontails give birth in shallow, grass- or fur-lined ground nests, and have between two and six young. As with all rabbits, newborns are naked and helpless. The closely related hares, in contrast, have fur-covered and alert offspring--the chief traits distinguishing the two groups. (Jackrabbits, in spite of their name, are actually hares, and are also considerably larger than rabbits.) It's not unknown for a female cottontail to give birth a half-dozen times a year; in southerly areas breeding can take place year-round. Eastern cottontails are capable of producing as many as 35 young a year.

After about two weeks of dependence on their mother, young cottontails begin moving away from the nest, and at the age of about a month they become independent. A few months later they reach full size, which in the case of the eastern cottontail is about two or three pounds. Including a fluffy tail that flashes a warning of white when raised, a typical cottontail is about a foot long.

Cottontails are widespread partly because they can eat almost any plant. They forage on leaves and berries in summer, then switch (in colder climates) to bark and twigs in winter. Rabbits ingest some of their own droppings to gain more nutrition from the same plant matter.

In many places it's not food that's a limiting factor for rabbits, but shelter from inclement weather and predators. As medium-sized mammals, cottontails are favored prey for animals from red-tailed hawks and great horned owls to foxes, weasels, coyotes and bobcats. "We've often seen cottontail remains at the entrance of burrows of red foxes, which also do well in an agricultural landscape," says Mankin. The rabbits' open nests are vulnerable not only to predators but to cold, rain and snow. They need a robust reproductive capacity to compensate for high losses. 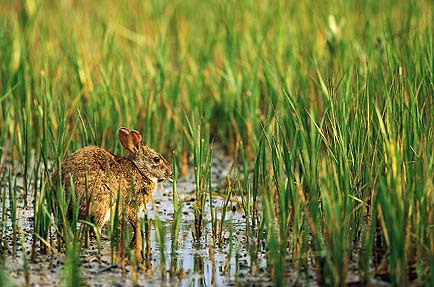 Cottontails are typically found in places where there is sufficient brush to provide cover. Eastern cottontails thrived after farmers opened up much of the eastern forest, because they found the resulting patchwork of fields, woodlots and pastures ideal habitat. They also did well farther west, where settlers added trees and shrubs to the open prairie and plains. Even some of North America's most arid areas have enough cover for the desert cottontail. The marsh rabbit has adapted to the swamps and marshes of the Southeast, while the brush rabbit lives in riverside thickets along the Pacific coast.

Even heavily altered habitats support rabbits. Phil Mankin and his colleagues have studied eastern cottontails in east-central Illinois, one of the most intensively farmed areas in the nation. "We have an ocean of corn and soybeans," he says, "though some would call it a desert. It's farmed from fence to fence, road to road. We thought we probably wouldn't find many rabbits out there."

That proved untrue. Mankin found cottontails concentrated around farmsteads, especially in the grass and shrubbery near farm houses and buildings--particularly in winter. In summer they used the corn and soybeans for cover. If modern farming practices, with their lack of fencerows for cover and weeds for food, are a drawback to rabbits, the precise geometry of row crops seems to help in avoiding predators. "If a coyote looks down a row and sees a cottontail, the rabbit can go out of sight in an instant between the crops," Mankin says.

Still, cottontails are stretched thin in this intensively farmed landscape; their home ranges are as much as seven or eight times larger than those of cottontails elsewhere. Also, where good habitat in Pennsylvania has been found to support four rabbits per acre, Mankin found only two to ten rabbits in 250 acres in Illinois. The difference, he says, is probably due more to a lack of cover in the crop rows than to a lack of food. 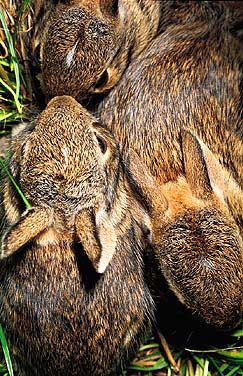 Photo: © PETER SKINNER
(PHOTO RESEARCHERS)
VUNERABLE PREY: Cats, foxes, owls, hawks and other predators find the ground-level lairs of rabbits, such as this mountain cottontail nest in Washington, easy pickings. To offset their losses, females are capable of producing dozens of young each year.
Some of the best conditions for cottontails nationwide--places with ample food and cover, and scarce predators--are literally found in our own backyards. "With subdivisions and gardens, we're creating great habitat for rabbits," says Mankin.

Sometimes that abundance provokes complaints from homeowners who don't appreciate rabbits converting carefully tended flowers and vegetables into copious droppings. And sometimes it can cause real ecological harm. In the 1980s, for example, saguaro cactus seedlings in Papago Park in Phoenix were not surviving at all. The park is a desert oasis entirely surrounded by developed areas, which kept most predators away. Researchers removed 96 desert cottontails from within a fence they built around a 1.5-acre plot; afterwards, saguaro seedlings began surviving.

But subdivisions and development aren't good for all kinds of cottontails. For example, the Lower Keys rabbit of southern Florida, a subspecies of the marsh rabbit, is jeopardized by the filling of its wetland habitat and by a proliferation of domestic cats. The riparian brush rabbit--which numbered fewer than 50 when it was listed as federally endangered in 2000--survives only in two small, isolated patches in California.

"The brush rabbit needs riparian [riverside] forests with a deep shrub layer that provides cover and food," says Patricia Foulk of the U.S. Fish and Wildlife Service (FWS). "This ecosystem in California has probably disappeared more than any other; we've lost over 90 percent of our riparian areas."

FWS hopes to start a captive breeding program to increase the population. It hasn't quite reached that point yet with another uncommon bunny, the New England cottontail, though that species has been proposed for federal protection, too.

These secretive rabbits, difficult to distinguish from eastern cottontails, were once quite common throughout most of New England. Now, because of habitat changes and a proliferation of predators, they have declined sharply--even as adaptable eastern cottontails have expanded their range into the same area.

"New England cottontails are certainly a species that has suffered, whereas eastern cottontails are quite capable of hanging on in the most degraded habitats," says John Litvaitis, a wildlife ecologist at the University of New Hampshire who has studied the two species for years.

Litvaitis has found that eastern cottontails deal better with small habitat patches than New England cottontails, because the former are more likely to venture from cover to feed in fields and pastures. New England cottontails, which have smaller eyes and can't spot predators as well as their eastern kin, prefer to stay hidden in the woods--and as a result often become malnourished in winter.

Overt competition between the two species doesn't seem to occur much; rather, it's a matter of adaptation to the contemporary New England landscape. While eastern cottontails thrive in patchy landscapes, New England cottontails need good-sized patches of dense brush and woodland. That habitat was abundant in the late nineteenth and early twentieth centuries, as huge tracts of abandoned farmland reverted to woodlands. Now those forests are maturing, or being lost to development. Brush is scarce, and New England cottontails are restricted to small, isolated populations.

Photo: © ZIG LESZCZYNSKI (ANIMALS ANIMALS)
BACKYARD BANDITS: With lots of tasty plants and many hiding places, subdivisions are ideal habitats for bunnies. This dismays many homeowners who see their colorful plantings reduced to rabbit droppings, as this cottontail is doing in a New Jersey backyard. The damage can be more than cosmetic; hungry rabbits can mow down native plant seedlings.

Litvaitis has found that advocating for more brush isn't easy. "Clear-cuts, prescribed burns and other methods of setting back forest succession aren't well received by many people," he says. "This is a tough sell."

But advocating for rabbits--and protecting the habitat they share with other creatures--may be easier. They may not have the "star power" of grizzly bears or wolves, but cottontails and their kin have an undeniable charm. And, as David Griffin and others have learned, a capacity to surprise. Good reasons not to take even the most common of creatures for granted.

Arizona journalist Peter Friederici tried to catch cottontails in the backyard as a toddler and has been on their trail ever since.