Once extinct in the wild, the red wolf now is threatened by coyotes, which are invading both its habitat and gene pool 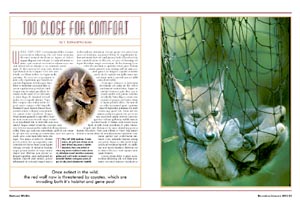 RED-WINGED BLACKBIRDS call from the willows as Scott McClellan wades into the canal. With his left hand he pushes back a curtain of honeysuckle and blackberry. In his right he carries a long, noose-tipped pole. "It's all right, buddy," he says, in a calming sing-song voice. "Keep your head up, that's right." I move a few feet down the canal bank and wedge a large animal crate into waist-high brush. "Easy, fella," McClellan murmurs again, and then I see the animal's eyes. Two orbs blink amber in the deep shade of the culvert. Slowly, the rest of the creature comes into focus--jaws half open, showing gleaming white teeth. Brindled flanks of tan and gray, with a back the color of charcoal. It is a hybrid wolf, a cross between the world's most endangered carnivore, the red wolf, and North America's most widespread canid, the coyote.

McClellan slips the noose around the animal's neck, tugs it out of the brambles and guides the creature into the crate. In a matter of minutes we are back in the biologist's U.S. Fish and Wildlife Service (FWS) truck, rolling through a pancake-flat landscape. Fields of cotton and corn stretch for more than a mile, edged by distant strips of dark forest nearly obscured in the heat shimmer. Sweat rolls down our faces. And in the bed of our pickup rides the fate of one of the most dramatic wildlife restoration efforts ever undertaken.

When a pair of radio-collared red wolves was released into North Carolina's Alligator River National Wildlife Refuge 14 years ago, the event marked the first time a carnivore extinct in the wild had been reintroduced to its native range. Once found throughout the eastern United States, from the Atlantic Coast west to central Texas and north to central Pennsylvania, the species was decimated by hunters and trappers for decades, while developers gobbled up much of its habitat. By 1970, the red wolf's entire population consisted of fewer than 100 individuals roaming a small coastal strip of Louisiana and Texas. And because the wolves were interbreeding rapidly with much more common coyotes--diluting the endangered animal's gene pool Canis rufus was on the verge of extinction.

In a last-ditch effort to save the species, FWS received permission in 1975 to capture all remaining wild wolves and screen each one for genetic purity. During the next five years, more than 400 animals were captured, of which only 14 were determined to be pure red wolf. Those wolves formed the founding lines for an ambitious captive-breeding and reintroduction project that, at least until recently, was heralded as a remarkable success. Now, however, the program is threatened by the red wolf's old foe, the coyote, which once again is moving into prime wolf habitat and interbreeding with its endangered cousin.

Thanks to the FWS project, about 100 reintroduced red wolves range freely today across sparsely settled northeastern North Carolina, where the 152,000-acre Alligator River refuge forms the core of a five-county, million-acre wolf restoration project area. In this surprisingly wild corner of the East Coast, four generations of wolves have raised 214 wild-born pups.

But the project, like other carnivore restoration initiatives, has been marked by contrasts and extremes, successes and failures. Amid vocal opposition from local landowners and national livestock groups, for example--who fear wolves will come out of the woods and eat children and cattle--tourists from the nearby Outer Banks flock to Alligator River to attend "howling safaris" and cruise back roads for a glimpse of the native predator. In Raleigh, the state capital, a months-long festival recently celebrated the red wolf with more than 100 life-sized sculptures throughout the city. Even as the event was being planned, however, a group of North Carolina counties and landowners sought legal permission to kill red wolves on private property. Meanwhile, an effort to establish a second wolf population in the state's Great Smoky Mountains National Park was canceled three years ago after most of the released animals died or strayed beyond the park's boundaries where they were not wanted.

The biggest worry these days, however, is the conundrum manifested in the back of Scott McClellan's pickup: increasing hybridization between wolves and coyotes that are expanding their range eastward. According to Buddy Fazio, the FWS red wolf recovery program team leader: "If we can't manage this problem, the integrity and identity of the species will simply become so diluted that it won't exist anymore." At today's hybridization rates, such fatal dilution could occur in as few as three to six generations.

To put the brakes on interbreeding, FWS last year launched a three-year plan to reduce red wolf-coyote interaction. A tiered approach, it divides the restoration area into management zones. The Alligator River refuge forms a coyote-free zone, where a pure red wolf population is maintained by trapping and removing all coyotes and hybrids. To the west and south is a zone where contact between wolves and coyotes is both managed and assiduously studied. Trappers target all canids, but in most cases coyotes and hybrids are sterilized, outfitted with radio transmitters and released.

"I can pull every coyote out of here and be on my merry way," explains McClellan, "but more are going to funnel in. Putting [sterilized animals] back into the landscape allows them to hold a territory and should help prevent breeding coyotes and hybrids from expanding their ranges." Or so he hopes. Beyond its primary goal of saving the red wolf, the new plan is designed to resolve such uncertainties.

By far the biggest mystery surrounding the red wolf concerns its evolutionary origins. For more than a century, the relationship between this species, the coyote and the gray wolf has been a source of controversy among wolf biologists. Some researchers have long contended that the red wolf is not a separate species at all, but a hybrid of the gray wolf and the coyote. A more traditional view is that the red wolf evolved in the forested southeastern part of the country, from Texas north to Indiana and east to the Atlantic Coast. Gray wolves evolved independently in the rest of the continent, while coyotes were limited, until recently, to the West.

Last December, Canadian geneticists announced an intriguing new theory. Examining DNA profiles, they identified sets of genes present in both red wolves and eastern Canadian wolves (a gray wolf subspecies found in and around Algonquin Provincial Park) but not in either coyotes or gray wolves. Based on their data, the scientists propose that gray wolves evolved in Eurasia one million to two million years ago, migrating to North America during the Pleistocene. Meanwhile, coyotes and red wolves evolved from a common North American ancestor that diverged into two species just 150,000 to 300,000 years ago. They claim that the eastern Canadian wolf is not a gray wolf at all, but the very same red wolf that lives in North Carolina.

But that's not what the skulls of red wolves tell Ron Nowak. A recently retired FWS biologist who has studied red wolf morphology for 40 years, Nowak just completed an extensive computer analysis of fossil remains, skulls and skull fragments of canid specimens collected before coyotes spread to red wolf country. His evidence suggests that the coyote and wolf separated from a common North American ancestor one million to two million years ago. This prehistoric wolf diverged into two separate lines, one that crossed the Bering Sea into Eurasia and another that continued to evolve in North America. This North American animal eventually vanished. The Eurasian line evolved into the wolves of today and apparently invaded North America in two waves around 10,000 to 20,000 years ago. The first became isolated in the East and developed into the red wolf. The second eventually diverged into the various modern subspecies of gray wolf in the West and North.

Resolving this evolutionary dilemma is far more than an academic exercise; its outcome could have far-reaching implications for red wolf conservation. If, for example, the red wolf and the eastern Canadian wolf turn out to be the same species, which population would be a better source for wolf reintroductions in New England? Could the red wolf program in the South have a larger gene pool to draw from? And might the red wolf even be taken off the Endangered Species List, scuttling the entire reintroduction effort?

For now, FWS is holding its course. "The science needs to advance further before we make those kinds of decisions," says Fazio. "One thing there is strong agreement on is that we should look at the entire body of evidence--paleontological evidence, genetics, morphology, behavior and social interactions." For the foreseeable future, then, FWS will manage the red wolf as a separate species whose last chance for survival in the wild is in the coastal forests of North Carolina.

The day after Scott McClellan traps that black hybrid, I'm back in North Carolina wolf country hitching a ride with FWS biologist Chris Lucash. Lucash has more than 15 years of experience with the red wolf recovery effort, first in Alligator River refuge, then in the Great Smokies, and now in Pocosin Lakes National Wildlife Refuge, adjacent to Alligator River. We course along the edges of cotton fields, clear-cuts and pine plantations, checking his trap line for signs of canids.

Since the project began, "one of the greatest strides is a turnaround in the way the general public values wildlife," says Lucash. "Here we have chosen to put a predator, the most feared and loathed aspect of wilderness, back right in our midst, and in the middle of the settled East. That alone is a big step."

His remark reminds me of another wolf-country cruise with Lucash many years ago. It was an early morning in 1990, and Lucash and I circled high above the Alligator River refuge in a small, single-engine plane with radio antennas affixed to the wings. The reintroduction effort was in its infancy. Fewer than a half-dozen wolves ranged free. In 15 months, five had been struck by cars and killed. Few pups had been born in the wild. At the time, no one was sure if red wolves could make a living in the wet woods and flat farm fields of coastal North Carolina.

From the air the enormity of the refuge was dramatic. A shag carpeting of trees and swamp scrub stretched into the haze that masked the horizon, broken only by meandering streams and creeks. "There," Lucash said, and pointed below. The pilot cut the throttle to muffle engine noise, and the horizon went vertical in the windshield. Three hundred feet below a pair of red wolves stood guard over a deer kill, eyes on the plane.

"The whole world is watching us," Lucash half-yelled over his shoulder. "No one has ever done this before." He nodded toward the ground. "It all comes down to what we learn right here." Today, more than a decade later, red wolf biologists are still learning, even as the issues surrounding the species' conservation become more and more complex.