Leave the Wetlands to Beaver

As beavers reclaim their rightful places in our environment, experts help us adjust to our industrious new neighbors

SOME PEOPLE are born certain of their purpose in life. For Sherrie Tippie, it took a special event to illuminate her calling. One evening in 1985, Tippie sat watching the local news on television when she saw a report about a beaver that was cutting down trees at a golf course in Aurora, Colorado. Tippie, a resident of nearby Denver, was horrified to learn that the beaver's misdeeds had earned him a death sentence.

"I thought, there's gotta be someplace to relocate that poor beaver," she recalls. She got on the phone and didn't hang up until she'd found the problem beaver a new home. Even though Tippie was a hairdresser with no prior experience in relocating wild animals, "I found a home for him," she notes. Sherrie Tippie had found her niche. 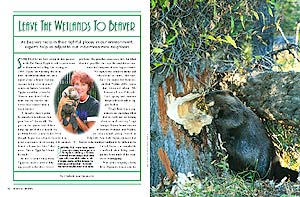 In the 17 years since then, Tippie has made a career of helping people solve their beaver problems. She preaches coexistence first, but when that isn't possible, she traps the amphibious creatures and transports them to happier homes. "We capture the complete family and relocate all of them," she says. Since she started her business, dubbed Wildlife 2000, Tippie has relocated about 500 beavers all over Colorado. Each spring and summer brings a flood of calls to Tippie's hotline.

"People think beaver populations are exploding when they're really just reclaiming their natural territory," says biologist Sharon Brown, director of Beavers: Wetlands and Wildlife, an educational group based in Dolgeville, New York. Brown estimates that beavers today number 6 million to 12 million in the United States--a remarkable comeback after being extinguished from much of the country by overtrapping.

With adults weighing a hefty 40 to 70 pounds, beavers own the title of North America's largest rodent. They spend about a quarter of their lives in the water where their broad, scaly tails act like rudders, helping them maneuver gracefully through the water. To stay warm in winter's icy waters, the creatures bundle up in an extra layer of fat. Voracious vegetarians, beavers devour as much as five pounds of tree bark, leaves and stems per day. Though beavers' back feet are webbed, their front paws are dexterous, a trait that makes them superior builders.

Only humans can rival beavers' ability to alter their environment, says Marilyn Irwin, a ranger at Colorado's Rocky Mountain National Park, where beavers are one of the top attractions. Beavers build fortified homes along streams using only sticks, logs, mud and river debris. Underwater entrances to these lodges keep predators out.

To extend their safety zone, beavers construct elaborate dams from mud, stones, branches and logs. The resulting ponds and channels provide them with safe passage to food sources. Fast and diligent workers, beavers often topple multiple trees in one night to supply their construction projects.

The sound and current created by running water acts as an alarm to alert the beavers to a breech in their dam. When leaks occur, beavers mobilize quickly to fortify their dike. Many a farmer has spent an afternoon breaking down a beaver dam, only to return the next day to find it standing again as if nothing had ever happened, says Irwin.

PARTS TO SPARE: Beavers are well equipped for their amphibious lives, with big incisors (above) to cut through trees and saplings on land, and rudderlike tails and webbed back feet to help them navigate through the water.

It's that sort of diligence that gets beavers in trouble with people. With beaver populations on the rebound, conflicts with humans have skyrocketed, and more people are making a living solving these conflicts. Since founding their company Beaver Solutions, Massachusetts residents Mike and Ruth Callahan have fixed more than 200 beaver problems without removing the creatures. "We get a lot of calls from homeowners who have flooded basements and we also do a lot of work for the highway departments," says Mike Callahan.

Recently the Callahans got a call from town officials in Billerica, Massachusetts. Beavers had overrun the town, and their dams were washing out roads and flooding basements. Locals were spending thousands of dollars to keep culverts clear, but the beavers flooded them again as fast as they could be cleared. "Politicians were really tired of people complaining and no one had any answers," Mike Callahan says. So the town hired the Callahans to find solutions.

Plugged up culverts and flooding were Billerica's biggest complaints. Both problems arise from beavers' desire to keep their ponds at a constant level. The solution is finding a water depth that will keep both humans and beavers happy, says Mike Callahan. Once this depth is found, the next step is developing a way to maintain it that won't trigger the beavers' dam-break alarm.

OUT FOR A SWIM: Beavers spend about a quarter of their lives in the water, where they are safe from most of their predators yet still have easy access to food sources.

When beavers hear water draining from a culvert, they respond by stopping the leak. The Callahans prevent beavers from plugging these drains by tricking them with a specially designed fence that keeps beavers beyond earshot of the culvert's flow. To prevent beaver dams from causing unwanted flooding, they install flow devices that allow water to drain without beavers sensing a leak in the dam. In Billerica these so-called "beaver deceiver" devices are keeping both humans and beavers happy without leaving either species homeless.

Biologists say there's more at stake here than just saving a few individual animals. "We've lost more than half our wetlands in this country, and beavers are returning the land back to its natural state," says Brown. A National Academy of Sciences report issued last year concluded that man-made wetlands are not doing a good job of duplicating the functions of natural wetlands.

"Beavers are ecosystem engineers, they create habitat diversity in the watershed," says Joel Snodgrass, a biologist at Towson University in Towson, Maryland. His research shows that beavers greatly increase the diversity of fish in headwater streams. "When you add beaver ponds to streams the overall diversity increases," says Snodgrass. "Vascular plant diversity is fairly low in streams, but the flooding from dams kills trees and you get very lush wetland areas with lots of plants." 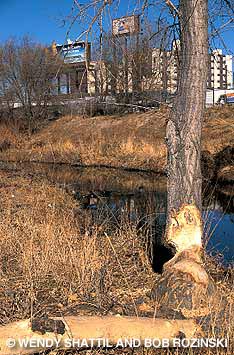 NATURE'S ENGINEERS: Cut trees (such as this one in Denver) and flooded roads may be viewed as a nuisance by some, but the beaver's handiwork has many ecological benefits. The wetlands the animals create provide new habitat for plants, fish and birds, experts note. "When you add beaver ponds to streams, the overall diversity increases," says Joel Snodgrass, a biologist at Towson University in Towson, Maryland.

"Beavers can help us manage our water resources," says Brown. "They slow the flow of water, and this provides flood control downstream. Beaver ponds clean the water by collecting silt and breaking down pollutants." In 1997 ecological economist Robert Costanza at the University of Maryland and his colleagues published a scientific paper estimating that natural wetlands provide goods and services valued at just under $8,000 per acre annually. "That means that in New York alone, where there are approximately 20,000 beaver colonies, beavers provide almost $2.5 billion worth of benefits each year," says Brown.

People are starting to appreciate beavers' work. As a result, finding new homes for the critters is surprisingly easy, Tippie says. Buck Ingersoll and Donald Downs were among the first to request beavers from Tippie. Three streams run through Twelve Mile Ranch, located in Colorado's South Park, which Ingersoll and Downs jointly own with several of their friends. The ranch's approximately 1,000 acres stretch across a backdrop of jagged mountains, and beavers have made their homes on the ranch for ages. When a mysterious disease suddenly killed off the ranch's beavers, the men grew worried. "We depend on those beavers for our water," says Ingersoll. With the beavers gone, the dams they'd built all washed away, and "our fishing went down the drain too," says Downs.

Downs realized they needed to get beavers back on the ranch, the question was: How? Eventually the men called Tippie, and she agreed to bring Twelve Mile Ranch her next batch of beavers. "I was expecting her to show up in a station wagon with some cages in the back, but Sherrie pulled up in a Ford Pinto with a beaver on her lap and a 50-pound beaver in the back," recalls Downs. Tippie stepped out of the car with a rotund beaver in her arms, and gave it gentle belly rub before setting it loose. "It was the damnedest thing I'd ever seen," says Ingersoll.

With the beavers in place, the dams were soon back in operation. The fishing holes returned and the area flourished. Today more than 50 beaver dams stand on the ranch. The resulting ponds create habitat for four species of trout: brook, rainbow, brown and cutthroat. And fish aren't the only creatures that appreciate the beavers' handiwork. "We get a lot of ducks and birds around the beaver ponds," says Downs. During the summer neighboring ranchers run their cattle on the ranch, and the cows thrive on the ranch's copious watering holes.

Beavers are in high demand these days, says Tippie. "I've had outfitters call me and request beavers so they can increase their fish stocks. I had a rancher who wanted beavers to control soil erosion," she says. Recently a developer asked Tippie to relocate beavers to a new development so residents would have a place to fish.