An interactive guide to the creatures that time forgot

YOUR FIRST THOUGHTwhen you see a horseshoe crab or a crocodile might be that it looks like a creature from long, long ago--and you would be right. These animals, and many others roaming our woods and yards (and living under the kitchen sink), appeared in the fossil record hundreds of millions of years ago. Those that have remained virtually unchanged, such as the horseshoe crab, which has been around for more than 300 million years, are termed "living fossils." The coelacanth, a strange-looking deepwater fish with little arm buds at the bases of its fins, is the classic living fossil. Scientists knew of it only from the fossil record and thought that it had been extinct for 65 million years, until 1938, when they discovered that it was still living--and regularly caught by local fishermen--in the Indian Ocean. 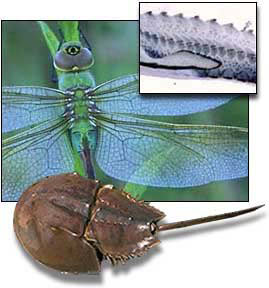 Other modern-day creatures, while not so old and unchanged that they have earned the term living fossil, are of interest because of their evolutionary relationships to other creatures. The evolutionary trend for hundreds of millions of years was from water to land. Plants and animals alike first came into being in water and then slowly began to develop strategies for living on land. In the marine mammals, we see this process in reverse, as they are the descendants of land mammals that migrated to the sea. The manatee, a huge seal-like animal of warm seas and inlets, is said to be a close relative of elephants and aardvarks, while the great whales probably derived from ancient cattle and camels.

All over North America, there are plants whose ancestors provided forage for dinosaurs, salamanders that don't appear to have completed the transition from fish to amphibian, and mammals that resemble the first tiny furred creatures that scampered about catching insects 200 million years ago. How many of these can you find living near you?